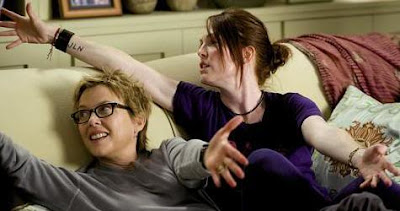 The kids are, indeed, all right though the adults are kind of messed up. Lisa Cholodenko's latest film has been much hyped (way hyped), but hopefully its early in the year release will allow it complete the "hype/over-hyped/reconsidered" cycle in time to secure some very well-deserved Oscar nominations. This story of a family and a marriage in crisis is thoughtful, extremely well-acted, and alternates easily between being very funny and very moving.

The kids are Joni (Mia Wasikowska) and Laser (Josh Hutcherson), two perfectly average suburban teenagers save for the fact that they’re being raised by two mothers. Joni has just graduated from high school and since she’s 18, Laser encourages her to contact the sperm bank their mothers used in order to find out the identity of their donor. Though reluctant, Joni ultimately agrees to do it since it means so much to her brother, and after a somewhat awkward phone call the siblings meet Paul (Mark Ruffalo). When their mothers, Nik (Annette Bening) and Jules (Julianne Moore), find out about the meeting it opens the floodgates for a lot of anxieties, putting pressure on a relationship that’s already at a shaky stage.

When Paul hires Jules to do some landscaping work at his house, things go from bad to worse. With Jules and Paul growing closer (much too close) and him exercising a degree of influence on the kids that she finds troubling, Nik increasingly feels like her family is in jeopardy or, rather, like her place in the family is slipping away. When she discovers that Jules and Paul have been having an affair, the family’s delicate balance is irrevocably changed and all the film's relationships are thrown into a tailspin.

The Kids Are All Right occupies a somewhat odd position pop culture-wise in that it centers on a gay relationship and works to legitimize it in part by highlighting all the ways that gay relationships aren't really so different from straight ones, while at the same time having a plot that hinges on a trope seen in a lot of mainstream films and TV shows and that often serves to reassure male viewers that lesbians aren't threatening because, ultimately, they're just waiting for the right man - a line of thinking which obviously undercuts the idea that a lesbian relationship is legitimate or real. The film thus finds itself in the strange position of being criticized by both the Christian right for being too gay, and by the gay community for being too straight.

In terms of the gay community's response, I do think that the displeasure incited by Jules' affair with Paul is valid given the dearth of positive portrayals of same sex relationships within the mainstream, but I also think this criticism is somewhat misplaced with regards to this particular film. For one thing, the development makes sense in the context of the rest of the story: after two decades together Nik and Jules have grown apart, Jules feels like there’s a power imbalance in the relationship, and she feels like her children are growing up and away from her. Paul reminds her of her kids, he makes her feel useful, and he doesn’t criticize her. Their affair isn’t about a lesbian who discovers that she wants sex with a man, but about a lonely woman reaching out for something familiar and comforting. For another thing, the development really isn’t surprising within the context Cholodenko’s work as a whole. Sexual fluidity and infidelity (and its effects) are consistent themes for her, the only difference is that in High Art and Laurel Canyon women in relationships with men have affairs with women. All Cholodenko has done is flip the script that she typically works with.

Laying all that aside, beneath whatever controversies the film has inspired it is, ultimately, a very good movie. Cholodenko, who co-wrote the screenplay with Stuart Blumberg, gives the characters plenty of room to breathe and allows them to be more than two dimentional drones at the mercy of the plot. There is a richness to the characters, the way they interact with each other, and the way the film approaches them (not to mention the masterful way in which each is played) that makes the film worth multiple viewings. I've really only scratched the surface of what makes The Kids Are All Right worth talking about; there is a lot to this movie and I really don't think I could recommend it more.