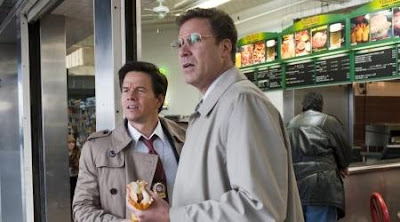 Buddy cop movies have been done to death. Even comedic takes on the buddy cop genre have been done to death, which means that The Other Guys is a lot funnier than it has any right to be. The trailers (which make the film seem more derivative than it actually is) don't really do it justice; this is a return to form for Will Farrell after a series of lackluster outings. Plus: Steve Coogan! Random references to TLC! And Mark Wahlberg in a performance that straddles the line between insane and brilliant!

In New York city two cops are revered above all others: Danson (Dwayne Johnson) and Highsmith (Samuel L. Jackson). Since Danson and Highsmith are so busy doing all the cool stuff (car chases, shoot outs, explosions), the lamer aspects of the job like paperwork falls to "the other guys" on the force. Two of those other guys are Allen (Farrell), who is actually quite happy to sit at a desk all day doing paperwork, and Terry (Wahlberg), who is desperate to be where the action is and continuously asserts that he is a peacock and must be allowed to fly.

When Danson and Highsmith die after believing too thoroughly in their own hype, Terry sees the opportunity for himself and Allen to step up and take their place. As luck would have it, Allen's investigation of a minor permits violation puts them on the trail of what turns out to be a massive Ponzi scheme conducted by David Ershon (Steve Coogan). Unfortunately they're told in no uncertain terms to drop their investigation and are eventually forced to go rogue in order complete it and bring the bad guys to justice. The plot for a film like this is really secondary, but it should be noted that this one is actually quite well-constructed.

Do I need to state that this movie is very funny? Probably not, but I will anyway because, like the plot, the comedy is so well crafted that it deserves mention. Farrell and Wahlberg play off each other perfectly, one underplaying to mask his character's deep-seated anxieties, the other a font of rage exploding through scene after scene. Frustrated by his low status on the force, Terry takes his disappointment out on Allen, getting so fed-up at one point that he angrily states that if he were a lion and Allen a tuna he'd go out of his way to kill tuna-Allen and then have sex with Allen's tuna wife. This is an easy laugh but the film then pushes itself beyond that with Allen's response, which includes a fascinating and elaborate tuna revenge plot, and takes the scene to a whole other level of hilarity. Similarly, the running gag of Terry being able to do things like ballet or play the harp is funny, but the revelation that he learned these skills sarcastically in order to show people who actually do do them how "queer" it is makes it hilarious.

Directed by Adam McKay (who also directed the Farrell-starring Anchorman, Talledega Nights and Step Brothers), the film flows easily and, it must be said, for a comedy it is an amazingly competent action movie. Most action sequences now are built on fast cuts that leave you with only the vaguest notion of what you've just seen. Here the action sequences are put together in such a way that you can actually see how they get from Point A to Point B, which is refreshing and very satisfying. So, kudos to McKay for that.

On the whole, I enjoyed The Other Guys a lot, though I don't think it reaches the heights of Anchorman. As a piece of frivolous summer absurdity, however, I couldn't ask for much more than what The Other Guys ultimately delivers.

Norma, I want to let you know that because of technical problems, I've had to relaunch my site THE MOVIE PROJECTOR with a new URL:

I would appreciate it if you would change the link to my site to the new URL so that your readers will have access to my new posts. In the meantime visitors will automatically be redirected to the new site.

I am gradually importing my old posts to the archive of the new site. Thanks, and I apologize for the inconvenience.

Will do. Best of luck getting everything moved and set up.

i thought the film was great, and definitely sees will ferrell at his best again, i had some thoughts about it you should check out, and comment if you like
great review!
jack
http://splicedreviews.blogspot.com/2010/08/other-guys-is-will-ferrell-highlight.html