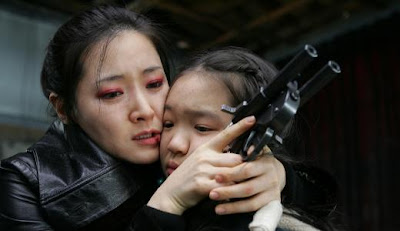 Lady Vengeance is the final chapter in Park Chan-wook's Vengeance Trilogy, which began with Sympathy For Mr. Vengeance and carried on in Oldboy. If you like films with plenty of blood loss, elaborate plans, and crazy girls who wear leather and go around systematically kicking ass, then this is the movie for you!

Like Oldboy before it, Lady Vengeance hinges on a revenge plot years in the making. Just out of prison after serving 13 years for the murder of a young boy, Lee Gum-ja (Lee Yeong-ae) is on a mission to settle the score with Mr. Baek (Choi Min-sik), the man who set her up. Forced to confess to the murder after Mr. Baek kidnaps and threatens to kill her infant daughter, Lee Gum-ja spends her sentence plotting to settle the score, making friends, and earning herself a series of favours. Once released, she wastes no time in calling in those favours and also tracks down her daughter, who was adopted by a couple in Australia.

With her daughter in tow, Lee Gum-ja kidnaps Mr. Baek and then makes a horrible discovery: the child she confessed to murdering was only one of several of his victims. With the help of Detective Choi (Nam Il-wu), who headed the investigation that sent her to prison, she tracks down the families of the other children. After showing them tapes Mr. Baek made of each child's final moments, Lee Gum-ja and Detective Choi offer them the choice of turning Mr. Baek in for the authorities to deal with or exacting their own form of justice on him. Since it's a Park Chan-wook film, I think we all know what they choose.

I haven't seen Sympathy for Mr. Vengeance (though I guess I'll have to get on that now, in order to complete the trilogy) so I can't attest as to how it fits in stylistically with the other two, but there are definitely some big storytelling differences between Oldboy and Lady Vengeance. Unlike its immediate predecessor, which unfolded more or less chronologically with flashbacks dispersed throughout, Lady Vengeance does a lot of jumping around between various timelines. This makes it a bit of a challenge to find your footing as a viewer, but it's effective in helping to establish the contradictions of Lee Gum-ja as a character. She is at once lauded for her "kind heart" and feared as "the Witch" and as the film's first act proceeds, we really never know where we stand with her or what she might do. As the film continues the characterization becomes more stable, though no less intense; she's still capable of anything, but we understand her a bit better.

As a film in its own right I think that Lady Vengeance is a pretty good movie and Lee Gum-ja herself is a fascinating character and extremely well played by Lee Yeong-ae. Considered alongside Oldboy, however, Lady Vengeance seems like a small step backwards. It is by no means a bad film, it just isn't the spectacular achievement that the previous film was. It is, however, pretty friggin' cool in spite of that.

Great review! I agree, while it isn't at the same level of Oldboy, I still think Lady Vengeance is an excellent film and the character of Gum-ja is so interesting.

Sympathy for Mr Vengeance is pretty good but for me it's the weakest of the trilogy. There are some confusing characters and ambiguous plot points, but it's still a cool movie (it is Park Chan-wook, after all). And Song Kang-ho is in it, and he's always great!

I too found Lady Vengeance a very intriguing and infectious film. Though Oldboy certainly remains the best of his Vengeancy Trilogy, unlike Alex, I loved Park's Sympathy for Mr. Vengeance.

I haven't seen Oldboy yet. On an another note, while Lady Vengeance doesn't reinvent the wheel of films about elaborate plans of vengeance through the character of Gum-ja, the film definitely reveals quite a lot about our society's fascination for violence. Obviously, this can be seen through the scenes involving the parents of the murdered children.

Hmm, so many differing opinions about Sympathy for Mr. Vengeance. I'm intrigued.

This sounds right up my ally. I loved 'Oldboy' and have been meaning to catch up with the other two installments in the trilogy.

By the way, I like your blog. I just discovered it today.