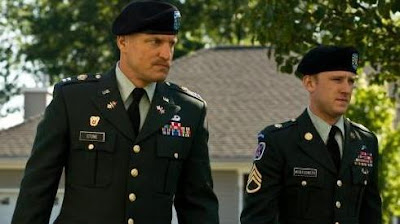 I missed out on The Messenger when it was in theaters and it was definitely my loss. This moving and thoughtful film is easily better than about half of what I saw in theaters last year and I'm kind of amazed that it only managed to snag two Oscar nominations (for Supporting Actor and Original Screenplay). If you haven't seen this one yet, do yourself a favour and rent it.

Ben Foster stars as Will Montgomery, a U.S. army Staff Sergeant recently released from the hospital and assigned to the task of casualty notification during the few months remaining in his period of enlistment. Will is teamed with Captain Tony Stone (Woody Harrelson), a veteran in the notification service who is quick to lay down the rules: keep to the script, don't make physical contact with the next of kin, keep your cool and don't involve yourself emotionally. This last bit is the most important and also the most difficult. Grief takes many forms in The Messenger but all are difficult to bear witness to and it's nearly impossible not to feel emotionally invested in that sense of devastation that follows the announcement of a loved one's death.

At first Will heeds Tony's advice, but when they deliver notice to Olivia Pitterson (Samantha Morton) that her husband has been killed, he finds himself drawn to her. Her reaction is markedly different from those that have come before - she's not "cold," exactly, but she's more held-together than anyone else Will has had to inform. Later he encounters her in a shopping mall, where she does show a bit more emotion after spotting an Army recruiter speaking to a couple of teenagers. He offers her and her son a ride home, he works on her car - already there is something between them, albeit tentatively. Both have lost people they love - for her it's a husband, for him it's the girl he left behind (Jena Malone) - and are trying to fill a void and the film deals with their cautious interactions in a way that feels very honest.

The Messenger is very much a character-driven film and one in which the nuances of personalities and relationships are given plenty of room to flower. Will is still in love with his ex and she may be with him, too, though she intends to marry another man. Things remain frustratingly unfinished between them; he couldn't commit before going overseas and she moved on and there is a sense that they're mourning what their relationship might have been, rather than what it actually was. Olivia is in a similar position, confessing to Will that she and her husband weren't getting along when he left and that, while she misses the man that she married, she wasn't exactly fond of the man he became. It's all a bit messy, but rather than vilify anyone, the film instead acknowledges that sometimes life is complicated in inescapable ways for which there is no fault.

Will's romantic complications are an important part of the story, particularly for what they help reveal about Will, but it is his relationship with Tony that is the real focus. Will and Tony make for an interesting contrast, as Tony appears to be the more "soldierly" of the two as they go out to make notifications, but is also desperately jealous of the fact that Will has experienced a more soldierly narrative. Will is a hero, injured in combat while saving others, while Tony is a Gulf War veteran who never got to have the war experience. He's also an alcoholic struggling to maintain his sobriety, lonely during the long, alcohol-free nights, and in need of a solid connection to another human being. It's easy to see how Harrelson got an Oscar nomination for this performance - it's utterly superb - but it's amazing that the equally excellent Foster didn't get any awards traction. The Messenger is a very strongly acted film which also boasts a great script and great direction. I'm only sorry that I'm just catching up with it now.

I've had this on DVD for a while now and still not got round to seeing it. I'll make sure I bump it up the pile now