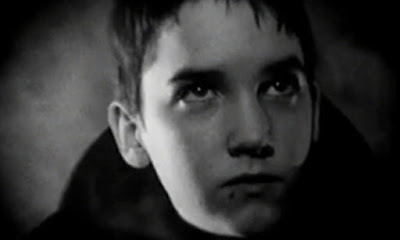 There's something very invigorating about a Guy Maddin film. As a filmmaker, he does things so completely, defiantly his own way, unfettered by what's on trend, unconcerned with what's commercial, that his films are always their own distinct things that cannot be mistaken as coming from anyone else. Brand Upon the Brain! is one of his better known, and more widely seen, gems and it's also one of his best. A psychosexual drama about a man grappling with the unresolved passions of his adolescence, and the secrets of his family's strange dynamics, Brand Upon the Brain! is a surrealist adventure that you have to see to believe... and even then, you might not quite believe it.

In Brand, a man named Guy Maddin (Erik Steffen Maahs) returns to the remote island where he grew up, and the lighthouse which served as his family home. The lighthouse was also an orphanage run by his parents, the absently present Father (Todd Moore), who is at work in his lab at all hours of the day and night, and the ever present Mother (Gretchen Krich), who is always watching and always micromanaging. She uses the spotlight atop the lighthouse and a telescope to sweep the island, making sure no one is up to anything, and radio/loudspeakers called "aerophones" to stay in constant contact with Guy no matter where he is on the island. Having returned to repaint the lighthouse so that Mother can see it at its best before she dies, Guy recalls his last days on the island when he was 12 years old (played by Sullivan Brown) and his infatuation with Wendy (Katherine E. Scharhon), a teenage detective who has come to the island to investigate the mysterious holes that have been bored into the backs of all the orphans necks. However, as quickly as Guy falls for Wendy, Wendy becomes infatuated with his older sister, Sis (Maya Lawson), whose sexual maturation Mother has worked hard to repress.

In her efforts to pursue Sis, Wendy pretends to leave the island and returns as her twin brother "Chance," for whom Guy quickly develops a crush just as he did with Wendy. While Sis and Wendy/Chance begin a clandestine relationship, they also continue the investigation of the holes that all the children, including Sis, have in the backs of their necks and discover that Father is routinely drawing "nectar" out of the brains of all the children, some of which is shipped to the mainland, the rest of which is regularly given to Mother in order to reverse the signs of aging, though her "rejuvenated" appearance is constantly being undone by her efforts to oppress everyone around her. One night while in a trance and being harvested, Sis murders Father and his burial and subsequent return to life courtesy of Mother's efforts leads to a small-scale rebellion on the island as an orphan known as Savage Tom (Andrew Loviska) whips the other children into a frenzy and into joining him in a pagan ritual. When the dust settles, a new order has taken over the island and eventually results in Guy's exile.

Brand Upon the Brain! is a film that is at once really accessible and not very accessible at all, depending on your sensibilities. It's accessible insofar as it wears its themes on its sleeve, openly dissecting the various layers of sexual obsession at play so that no aspect of it can be missed. At one point it even pauses for a moment to describe the story as one of two "triangles," one in which Chance is at the center and desired by both Guy and Sis, the other where Guy is at the center and desiring both Chance and Wendy, for ease of reference. The film also comes equipped with intertitles and voiceover narration (the DVD version has multiple options for the narration; I highly recommend Isabella Rossellini's) that further serve to spell things out. On the other hand, aside from the narration, the film is silent, and it's also shot in black and white and unfolds in a somewhat disjointed way with images coming at you in a staccato fashion. It isn't really an "experimental film," but it has certain aesthetic qualities (familiar to any fans of Maddin, who likes his movies to look as if they've been unearthed from some vault where they've been locked away for decades) that make it look like one.

When it comes to Maddin, there's not really much of a gray area - you either like his style or you don't. The one real exception, I think, is My Winnipeg, which taps into the kind of nostalgic mythologizing of a hometown that anyone can connect with. If you like Maddin and his from-another-era-in-another-dimension kind of style, Brand Upon the Brain! is a movie that will thrill and intrigue you, and often make you laugh (like how every time things get a little too heavy in the narrative, an intertitle pops up stating "Too much for Guy!" and he promptly passes out). If you don't like Maddin, Brand probably isn't going to convince you otherwise with its dark comedy, little touches of horror, and its relentless examination of sexual, and sexualized, preoccupations. As a Maddin fan, I love this movie, and I'm all in for its dreamy, hypnotic feel and its many eccentricities. I'm not sure how a filmmaker as determinedly niche and uncommercial as Maddin keeps getting the money to make his movies, but I'm glad he does.
Posted by Norma Desmond at 8:00 AM