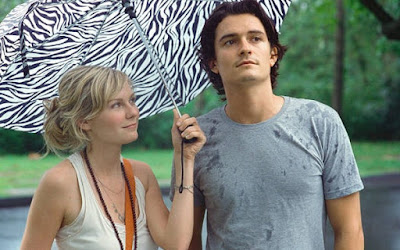 
The Story
The golden boy is Drew Baylor (Orlando Bloom), a shoe designer whose latest design somehow ends up costing his company the better part of a billion dollars to correct a defect. Drew is fired and then learns that his father has died while visiting his family in Elizabethtown, Kentucky. With his mother and sister struggling to deal with the loss, Drew goes to Elizabethtown to retrieve his father's body and maybe build a bridge between his branch of the family and the rest. On his way to Kentucky, Drew catches the eye of a young flight attendant (Kirsten Dunst), who apparently has nothing but free time that she can devote to helping him get his house in order as he struggles over his professional failure and the loss of his father.


The View of 2005
The Good: "While the movie is hopeful, amiable and buoyant, it's not exactly serendipitous, and even stares here and there at the meaninglessness of life and the cold inevitability of death. Elizabethtown is that rare animal, a dialogue-driven comedy -- and a good one at that." - William Arnold, Seattle Post-Intelligencer

The Bad: "[Orlando Bloom's] American accent sounds authentic, but the life that surrounds him feels synthetic. The movie wants to be many things -- a cultural travelogue, a magical mystery tour, a pilgrim's progress, a picaresque adventure - yet the one thing it definitely is, a love story, keeps getting sandbagged by gratuitous complications." - Joe Morgenstern, Wall Street Journal


The View from 2015
Ten years and two feature films later, Elizabethtown feels like one half of a dividing line in Cameron Crowe's filmography, the other half being the film that immediately preceded it, Vanilla Sky. Up until these two films, Crowe had a fairly golden career as a writer/director which includes a classic of the teen movie genre (Say Anything...), an ode to Generation X and the Seattle grunge scene (Singles), a romantic drama that netted five Oscar nominations including Best Picture (Jerry Maguire), and a beloved behind the music movie for which Crowe won an Oscar (Almost Famous). The films after this point - Vanilla Sky, Elizabethtown, We Bought a Zoo, Aloha - have had, at best "mixed" reviews and, at worst, have been pummeled by critics. Now Vanilla Sky, being a science fiction thriller, is an outlier in Crowe's filmography, a film that could not be thematically more different than anything that came before or after and so, if it's not an entirely successful film, you can at least admire Crowe for going so far out of his comfort zone and challenging himself by trying something different. Elizabethtown, on the other hand, should have been entirely within Crowe's wheelhouse, and yet it just doesn't work, as if by trying to travel an unfamiliar road with Vanilla Sky, he lost his way back to the road he used to know so well.

It should be noted that Crowe's films and characters have always had a degree of heightened reality to them, moments of "bigness" that aren't really realistic, grand gestures that an actual person wouldn't actually attempt to pull off. In his pre-Elizabethtown films Crowe was able to build and unfold his stories in such a way that those moments, unrealistic though they might be, had a true emotional core to them and worked within the context of the film. One of the problems with Elizabethtown is that it's an emotionally flat movie that seems to think that it's a profound exploration of a man's relationship with his father. Throughout the film, we're given to understand that Drew's father was a wonderful man who had a great impact on all those around him, but we're given no indication of why he was a wonderful man beyond the fact that he was just "the best." Who was Drew's father? Who, for that matter, is Drew? Elizabethtown has taken a lot of flak for Kirsten Dunst's character, who prompted film critic Nathan Rabin to coin the term "Manic Pixie Dream Girl" to describe her particular type (and ten years later he has been inspired to retract the term due to it being so overused and thoughtlessly applied that it has become devoid of meaning), but Drew is easily as empty as she is. She might be a "helper maiden," but she's a helper to a guy who is basically a zero as a character. Everything about Drew is defined in the most superficial terms possible: we're supposed to admire him because he's a good looking guy who was, at one point, massively successful, and then we're supposed to feel sorry for him because, having experienced what is apparently the only failure he has ever encountered in his life, he decides to attempt suicide in the most dramatic and least reasonable fashion possible ("bigness"). But who is Drew and why should we care? It's a question that Crowe is never able to answer in the film and that Bloom is never able to rise above as an actor.

Of course, if the story itself were a little more interesting, the film might be able to get away with having an empty vessel at its center (one could argue, after all, that Jerry Maguire isn't much more of a character than Drew, he just had the good fortune of Tom Cruise's charisma). While Elizabethtown is a deeply personal film for Crowe, he's never quite able to make what's personal to him engaging to the viewer, letting the film flow without any real narrative momentum and in shapeless fashion for 123 minutes, filling out its running time with montages, dialogue that's too twee by half ("I want you to get into the deep beautiful melancholy of everything that's happened."), and moments of "bigness" that just don't work, including Susan Sarandon as Drew's mother performing a eulogy/stand up comedy/dance routine (and if Susan Sarandon can't make something work, it was never going to work). To be fair to the film and to Crowe, there are bits and pieces of Elizabethtown which suggest a better, more compelling movie buried somewhere underneath all the problems. Alec Baldwin makes a brief but entertaining appearance as Drew's boss, and there's a small subplot involving Drew's free spirit cousin, Jessie (Paul Schneider), who is in constant conflict with his more traditionally minded father (Loudon Wainwright III), that's far more interesting than anything Drew does from the beginning of the film to the end. There is also exactly one moment when the relationship between Bloom and Dunst's characters sparks a bit, which is when they meet to watch a sunrise after spending hours on the phone with each other, and she remarks that they "peaked on the phone." Mostly, however, Elizabethtown is a film that never lands and never connects. Killer soundtrack, though.
Posted by Norma Desmond at 7:23 PM