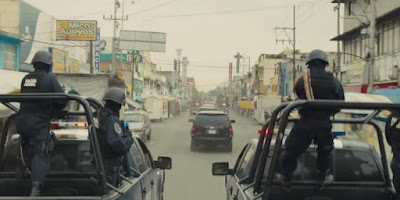 "Nothing will make sense to your American ears, and you will doubt everything you do." The world depicted in Denis Villeneuve's Sicario is one of chaos and pain, a world in which a good person trying to do the right thing in the right way doesn't stand a chance, though they won't realize it until the point where they're so completely beaten down that there's basically nothing left. It's a bleak movie, is what I'm saying, but it's also a powerful one that rivals Traffic in its depiction of the impact of the drug trade from both sides of the border between the US and Mexico. Like Villeneuve's Prisoners, this is a white-knuckle ride into the darker aspects of humanity and it's not for the feint of heart.

At the center of the narrative, at least in the beginning, is Kate Macer (Emily Blunt), a by the books FBI agent who is selected to join a special task force put together by Matt Graver (Josh Brolin), a Department of Defense adviser who believes that less is more in terms of the information he's willing to share. Having just participated in a bust of an Arizona house in which dozens of corpses, victims who have gotten caught up as collateral damage in the Mexican cartel wars, were discovered and in which two police officers were killed by a bomb, Kate is anxious to do something that will make an observable difference in taking down the cartels, and Matt promises her that this is just such an opportunity. Kate almost immediately begins to have second thoughts about throwing in her lot with Matt when she gets on a plane and learns that they aren't going to El Paso, as Matt originally told her, but to Juarez where, despite having no jurisdiction to do so, they will extract a prisoner for questioning. Also along for the ride is Alejandro (Benicio del Toro), who manages to tell Kate even less than Matt does and whose purpose on the mission is as vague as his credentials, as he doesn't appear to officially work for any particular agency.

Kate's initial misgivings deepen when the extraction turns into a bloodbath at the US/Mexico border and she realizes that Matt and Alejandro aren't following any official protocol and are making up rules as they go along, but her criticisms fall on deaf ears as Matt and Alejandro's tactics result in the prisoner revealing the whereabouts of a cartel boss. Rather than bail, Kate calls in her FBI partner, Reggie (Daniel Kaluuya), so that she'll have at least one person she can trust on board, but his presence does little to right the ship. Matt and Alejandro continue to trample over the rules and regulations that Kate clings to a guiding force, and when she seeks assistance from those higher up she's informed that while what Matt is doing is unconventional, his efforts will have the valuable effect of shaking the tree, putting the cartel leaders off their game and causing them to panic and make mistakes which will make them easier to catch. However, while Kate might be able to talk herself into morally gray actions in the interest of bringing bad guys to justice, that's not really what the men she's working with are after.

On its surface, Sicario is an effective crime thriller that keeps the viewer's blood racing as it speeds from one action piece to another. A late sequence in which Matt's team raids a cartel tunnel near the border is fraught with tension and reminiscent of the raid sequence from Zero Dark Thirty, less the helicopters and with much of it unfolding through the eyes of a thermal vision camera. Beneath the surface, the film is a politically pessimistic story without heroes, where the goal is not to eliminate the drug trade so much as gain some degree of control over it. It isn't a story of good guys and bad guys, but of various kinds of bad guys and all of the innocent people who will fall between them. Kate thinks that she's on the side of good but, after witnessing various horrors which inspire her disgust, Alejandro challenges her by asking where she thinks the cartels learned their tactics in the first place and Matt's actions, and the way that they are implicitly sanctioned by those higher up turning a blind eye to them, certainly lend that some credence. There is ultimately no difference between the two sides of the war, the words spoken by a man on one side of the line being echoed later by one on the other, all of the players ruthless in their desire to get ahead. Matt and his team have no more qualms than the cartel members about the possibility of innocent civilians being caught in the crossfire at the border, and Matt, Alejandro, and the cartel members all adopt the same strategy when they need to bend someone to their will of threatening specific, horrific harm on the children of that person. There is no difference between the good guys and the bad guys; the players are instead distinguished by who dies and who lives another day.

Sicario is also, in its way, a commentary on the nature of privilege that feels particularly topical as the race for the Republican presidential candidacy devolves, among other things, into a contest to see who can be the most inflexible on the subject of the US/Mexico border and the people flowing across it. The Mexico depicted by the film is one in which violence is a matter of course, where the police are just as likely to be on one cartel or another's payroll as not, mutilated bodies hang from bridges as a warning, and gunfire and explosions light up neighborhoods at night (it's worth noting, with respect to my point in the previous paragraph, that the way the cartels mutilate and display bodies is openly admired by one of the US officials as an effective tool, while another invites Kate to view the nighttime violence from a safe distance by asking if she wants to see "something cool"). The people in Mexico who aren't in the cartels, who just want to escape the violence and live their lives, are stuck. While Kate is put through the ringer from the beginning of the film to the end, she still has some degree of choice when she gets to the end. She is not only afforded the opportunity to make a choice about her immediate fate, which so many others in the film do not get as their fates are instead decided for them, but she has a choice about where she goes from there. It is suggested to her that she could retreat and find a small town with a justice system that isn't broken yet where she could make a life for herself. She has that privilege as a result of being on the right side of the border. Meanwhile, in Juarez, a child's soccer game is interrupted by gunfire nearby and everyone pauses for a moment before carrying on as if this is just a normal, everyday occurrence.

Sicario is a brutal film, but it's artful for the way that Villeneuve and screenwriter Taylor Sheridan unfold it to upend expectations and leave the viewer with an unbalanced feeling. Traditional storytelling tells us that Kate is supposed to hold the film as its moral and physical center, and yet her sense of right and wrong comes to nothing, and the film itself pushes her further and further from the story's center as it goes on. It's a storytelling gambit, especially since Blunt delivers such a strong performance as Kate, but it pays off in the way that it unsettles things further. The presence of someone like Kate is supposed to give us comfort and assure us that there's still some force for good keeping the evil at bay; instead, the film leaves us with the feeling that the world really has become a "land of wolves" with so many lambs sacrificed in the process.
Posted by Norma Desmond at 8:00 AM