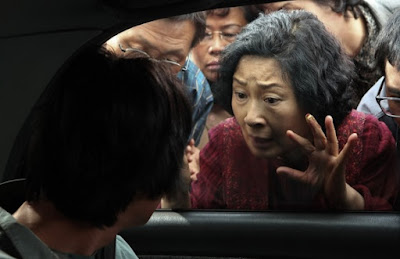 Is there any force more powerful than a mother’s love? Certainly not in Bong Joon-ho’s Mother, a film in which the title character would do anything for her son, a young man of marginal intelligence, vulnerable to manipulation, who ends up arrested for murder. Hers is a crusade to prove his innocence and, in a more conventional film, that would be the story: a determined woman fighting against the odds to rescue her child. But Mother isn’t a conventional film and its hero is not a conventional woman; it tells its story in shades of gray, unfolding it so that the concept of morality becomes increasingly meaningless. The only thing that remains true from beginning to end is that it is a fascinating, endlessly engrossing movie.

The Mother (Kim Hye-ja) of the title is never named – she doesn’t need to be, her parental role is her identity. Her son, Do-joon (Won Bin) is physically grown up but is still dependent on her due to an intellectual disability which makes him unable to live on his own. The Mother supports them with her job selling medicinal herbs in a shop, as well as her underground work as an acupuncturist, but she’s unable to keep Do-joon out of trouble, as he’s frequently under the sway of his friend, Jin-tae (Jin Goo), who talks him into criminal activities and then lets him take the fall by himself. When a local girl is murdered, her body left on display on a rooftop, Do-joon is taken into custody and the Mother is convinced that, once again, Jin-tae is simply using her son as a patsy for his own misdeeds. With circumstantial evidence pointing to Do-joon, and the boy having signed a confession, the police close their investigation, and the defense attorney the Mother hires wants only to make a quick deal with the prosecution so that he can move on to his next case. It’s up to the Mother, then, and her alone, to prove her son’s innocence.

The success of Mother rests very much on its protagonist, on the ability of Kim on screen and Bong behind the camera to make the character sympathetic enough that the viewer is not only involved in her quest, but wants her to succeed even after the story takes a sudden turn in its third act. Bong roots us so firmly in the Mother’s perspective as she fights to free her son, going so far as to play amateur detective and collect evidence while Do-joon languishes in jail and becomes an easy target for other prisoners, that our loyalty to her remains even after the narrative transforms from a story of a mother’s love for her son to a story of how people can sweep horror under the rug and choose to forget rather than redress the wrongs. The Mother is a woman who truly believes that she and her son are all each other has, that everyone else is merely a figure with the potential to disrupt their peaceful life together, take advantage of them, and cause them harm in either small way, such as exposing the Mother’s work as an acupuncturist, or big ones like framing the son for murder. The world is a place full of danger and the son can only be safe when he’s with the Mother; when he leaves her sight, disaster occurs because she’s the only one who cares and the only one who can save him. It’s her singularity of purpose that becomes the force carrying the movie forward and which makes it so fascinating and enthralling.

Although it might sound a little counterintuitive, given that she’s never even provided with a name of her own and that her entire identity is wrapped up in the existence of a man, the Mother is one of the best female movie roles of the last decade. She is relentless in her pursuit, but not invincible, and in the course of her private investigation she does get in over her head and realize only when it’s too late just how much trouble she’s opened herself up to. She also turns out to be a morally blank person, driven so far by her own desires and by self-deception that she can commit an unspeakable act, which is itself an unusual thing for the supposed hero of a story. Kim is a dominant force from the beginning of the film to the end and turns in a nuanced and absolutely captivating performance, as does Won as the son. Theirs is a brilliant give and take as a pair of characters who are definitely as vulnerable as they seem and yet, at the same time, turn out to be capable of inflicting their share of damage, too. Since Mother Bong has experienced some degree of crossover success with last year’s Snowpiercer, but his earlier work, and this film in particular, is still very much worth seeking out or revisiting. This is one of the decade’s best mystery thrillers.
Posted by Norma Desmond at 8:00 AM

Complete yes to this movie. It is simply fantastic for all of the reasons you stated. The performance by Kim Hye-ja is simply heart-wrenching. So glad this made your "Essentials" series.

It really is a revelatory performance and the character itself is really fascinating. I'm genuinely surprised that no one has attempted an English-language remake, as I'm sure that any number of high profile actresses would kill for a role this this.