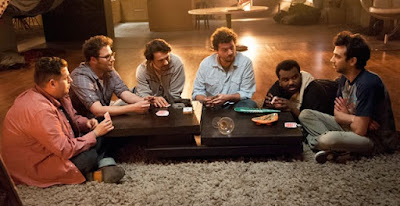 Each of the principal actors of This Is the End have made their share of bad movies, but for every bad movie they've made since, they can at least point to this one in order to regain a little bit of good will. An apocalypse comedy in which everyone plays an exaggerated (I would hope) version of himself, This Is the End plays upon the public personas of its stars and supporting players to great effect, playing into and against what we think we know about the stars based on their movies and public appearances, all while telling a surprisingly potent story about the difficulty of sustaining a friendship as circumstances change and physical distance gives way to psychological distance. Mostly, though, it's just really funny - though it probably could have gotten by with at least one fewer rape joke.

Written and directed by Seth Rogan and Evan Goldberg, This Is the End is about Rogan and Jay Baruchel, two long-time friends whose lives have taken them in very different directions. Both Canadian, Seth has hit the big time in Los Angeles and set up shop there, while Jay has preferred to stay on in Canada, leading to a career that is successful in its own right but decidedly less high profile. Jay has come to LA for a visit and will be staying with Seth, hoping to reconnect and get their friendship back on track, but he's disappointed when Seth announces that he wants them to go to a party at James Franco's house, as he anticipates that it will be full of people he either does not know or does not care for. He is, in particular, not looking forward to seeing Jonah Hill, whom he despises and whom he suspects, despite Jonah's ingratiating manner towards him, dislikes him just as much. Uncomfortable at the party, Jay decides to go down to a corner store to buy cigarettes and is accompanied by Seth, who argues that if Jay just gave his other friends a chance, he might come to like them. Their argument won't get resolved, however, because while they're in the store, strange blue lights begin beaming select people up into the sky while down on the ground everything begins to fall into chaos.

Jay and Seth rush back to James' house, where they find the party still in full swing and no one the wiser as to what's going on until they begin to go outside and see that that Hollywood hills are on a fire and then start getting sucked into the hole that emerges in James' front yard. Of the party goers, only James, Seth, Jay, Jonah, and Craig Robinson seem to have survived to make it back into the safety of the house and they barricade themselves inside to protect themselves from the looting and violence that they believe will occur until the authorities can come in to rescue them. They hunker down and take stock of what food James has, agreeing to ration the resources while they wait for help, not realizing that Danny McBride has been asleep in a bathtub upstairs the whole time and will emerge in the morning to waste all of the water and all the food they've got. While the group slowly comes around to the realization that what's going on isn't a common disaster but an apocalyptic event, tensions among them slowly rise as Jay's jealousy of Seth's new friendships stoke his resentment of how thoroughly Seth has left him behind, James' dislike of Danny threatens to reach a fever pitch, and Jonah's secret loathing of Jay leads him to pray for Jay to be murdered which in turn seems to summon a demon and results in, in Jonah's own words, "Something, um, not that chill."

This Is the End gets its mileage out of a lot of dumb and some gross humor, but for the most part that really works. I could have lived without a demon possessed Jonah spewing bile all over Seth and James, but the extended argument between James and Danny about ejaculate just gets funnier the longer it carries on, particularly when Danny questions why James has porn magazines when his house is filled with high tech gizmos and James responds, "That's right man, I like to read!" I do think that it goes to the joke-constructed-around-the-idea-of-rape well a lot more often than it needs to (I can recall five rape jokes from the film, but there may have been more), but its first foray is actually really funny and that's precisely because it's the one which isn't rooted in the idea that someone being raped is hilarious. The set up is that Emma Watson has survived the deteriorating conditions outside James' house and is welcomed in by the guys, who suggest that she go and get some rest after all she's experienced. While she's out of the room, Jay decides to address what he assumes they're all thinking, which is that they need to do something to reassure her that they aren't going to rape her, only to be chastised by the rest of the guys for the idea of rape even being on his radar in any capacity. It's funny because it's a joke about the culture and the notion perpetuated by a lot of fiction that, when society breaks down, most men are an opportunity away from being rapists, and it's funny because it's capped off by Emma misinterpreting the conversation and robbing them of their meager provisions at axe-point. The point is that the joke isn't on her, which can't really be said of the Lindsay Lohan joke, the Channing Tatum joke, Danny's assertion that Jay is "two minutes away from becoming the house bitch," or Jonah's encounter with the demon.

That issue aside, This Is the End is pretty solid in both who it targets and how, and all of the players are amazingly game for being made fun of. Franco really leans into his public persona of being kind of a pretentious douchebag, and Hill is pretty funny sending up the notion that he now takes himself very seriously as an actor. Meanwhile, Michael Cera shows up briefly at the beginning of the film to portray himself entirely against type as an obnoxious, coked up asshole, which is arguably the funniest thing in the movie until Danny McBride learns that he was killed during the early stages of the apocalypse and comments, "I guess if Michael Cera's gone it's not a total loss, huh?" The actors are all very willing to make themselves the punchline and there's something fairly endearing about that, just as there's something endearing about how seriously it takes the idea of friendship and the rift between Seth and Jay, which is revealed to extend well beyond the beginning of the actual film. For a film with so many throw away gags and jokes, its central premise is actually very well constructed and thought out, giving the film an emotional center that makes its finale a nice mixture of incredibly silly and a little heartwarming. If only Rogan and Goldberg's follow up, The Interview, could have been as good.
Posted by Norma Desmond at 8:00 AM

I really had a lot of fun watching this one. I completely agree with you about the Emma Watson scene being the funniest of the rape jokes, by a mile. One of my favorite comedies from that year. And a whole lot better than The Interview.

It's so much better than The Interview that it's hard to believe both movies were made by the same people.

I think I...liked The Interview more...lol...but this had my favorite individual scene of 2013!