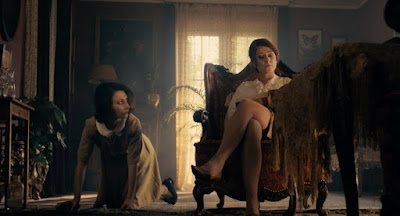 Although it has a premise that sounds lurid, and is styled to resemble European softcore from the 1970s, Peter Strickland's The Duke of Burgundy isn't an exercise in titillation. All things considered, it's actually pretty tame in its sexual content, trading more on eroticism than sex or nudity, and when you get beyond the superficial aspects of its kink, it's a thoughtful and nuanced story not just about a relationship, but about relationships generally. Built around solid performances from Sidse Babett Knudsen and Chiara D'Anna which root the story to a core of truth even as the film itself throws out touches of unreality, The Duke of Burgundy is a fascinating and engrossing viewing experience. Gorgeous, hypnotic, and ultimately quite moving, this is surely one of the year's best films.

At an undisclosed time and undisclosed place, The Duke of Burgundy opens with Evelyn (D'Anna), a student of lepidopterology who apparently works as a maid for Cynthia (Knudsen), who treats her coldly, seeking ways to humiliate her and reasons to punish her. Soon, however, the film lifts back the veil and reveals that things are quite what they seem. Evelyn isn't really Cynthia's maid, but her lover, and the two are engaged in a role playing scenario built around dominance and submission, all of which has been painstakingly orchestrated by Evelyn, who uses index cards to write out the scenario right down to the lines that Cynthia should say. Cynthia dutifully obliges, donning a wig, slipping into lingerie, and trying to adopt the chilly authoritarian persona that Evelyn demands, though much of what Evelyn wants is beyond her own comfort level and outside her own desire.

Things begin to take a turn when a carpenter (Fatma Mohamed) comes to the home to consult with Cynthia and Evelyn about a specialty contraption that Cynthia has agreed to buy for Evelyn's birthday. The meeting ends in disappointment for the latter when it is revealed that even if they place the order, it won't be ready in time for her birthday; and insecurity for the former, who picks up on the charge that Evelyn seems to get from being in proximity of the carpenter, who has the ability to create something which will satiate her desires. Literally and figuratively, a distance begins to grow between Cynthia and Evelyn, and a true rift occurs when one betrays the other by stepping outside the relationship. Wanting to maintain the relationship the two try to move forward, but the damage may be unfixable, particularly for the wounded party whose recourse is limited in the context of a relationship where punishment is tied to pleasure.

When it comes to its sexual content, The Duke of Burgundy is more about the power of suggestion as opposed to the power of explicit images. Strickland frames objects and unfolds shots so that they are charged with the energy of erotic possibility, and as a result it feels like the film is more sexually explicit than it really is, when in actuality Strickland is pretty discrete about what we actually see happen. The Duke of Burgundy is imbued with this charged atmosphere, and BDSM role play plays a major role in its story, but it would be reductive to dismiss it as merely a movie about sex. It's a movie about power dynamics in a relationship, about how routine can engender boredom, and about the need for compromise and empathy in order to sustain a long-term relationship. The film is possessed of a high degree of specificity, particularly since it does so much to distinguish its world from the real world (it's a world without men or cars, where everyone rides around on bikes and attends lepidopterology lectures, and where one's collection of moth and butterfly specimens can be used as currency), yet at the same time it's also weirdly relatable. The sentence "It would be nice if you did it without having to be asked" can be (and probably has been) uttered in any context in any relationship, and every long-term relationship is likely marked by moments when one partner grows frustrated at the other's expectation that their mind can be read or, conversely, when one partner grows frustrated at the other's inability after several years to anticipate a particular need. With its emphasis on the actual relationship between the two women, The Duke of Burgundy is much more about intimacy and sustaining desire once things start to become routine than it is about sex itself.

Strickland uses the premise to dig deep, getting beyond a surface where it might appear, at first, that he's arranged the elements to make the situation as salacious as possible. However, in making this a story between two women, Strickland has instead removed the burden of naturalized gender norms and power dynamics from the narrative, clearing away the need to either play into or undermine expectations and allowing him to sharpen his focus until its just a story about how people relate to each other. There aren't a lot of mainstream movies that have similar kind of stories, so the film that I ended up being reminded of was the James Spader/Maggie Gyllenhaal movie Secretary, a movie that is pretty problematic - not necessarily because it's about a woman submitting to the dominance of a man, but because it has a really messed up idea of consent (if you haven't seen the movie, Spader's character just decides, without discussing it or asking Gyllenhaal's character beforehand, to start engaging her in BDSM play and then lucks out when she turns out to like it). The Duke of Burgundy doesn't have those problematic elements, and situates the power position with the character who is ostensibly the submissive one, though given how thoroughly she stage manages the encounters, she can be considered the dominant one even when she's being submissive.

Strickland plays a lot on the subtleties of the interactions between Evelyn and Cynthia, drawing in the dimensions of the relationship by observing the always shifting dynamic between them and maintaining a light enough touch that the tone of any given scene can shift from drama to comedy and back without any apparent effort. The relationship is characterized by the film as being a loving one, but the two are also at times really irritated with each other, with the way that the other woman's needs are at odds her own, or with the demands being made of her that are behind her ability, or with the way that planned scenarios don't quite go the way they're supposed to, and Strickland finds the humor situated somewhere in the middle of that. Overall, The Duke of Burgundy is a strong effort in every respect, a film that can be marvelously odd and deeply moving and which is beautiful looking from beginning to end. It's a work of art.
Posted by Norma Desmond at 8:00 AM