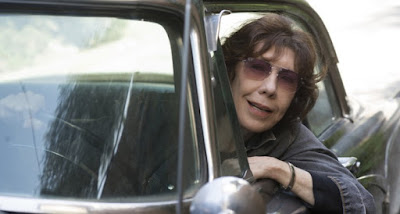 "Mom says you're philanthropic," the granddaughter states, much to her grandmother's confusion. After thinking about it a moment, she corrects herself, she meant "misanthropic." The grandmother nods; that makes a lot more sense. Paul Weitz's Grandma is as delicate a gem as its title character is difficult and caustic. It's a film that begins with an ending, takes its characters on a literal journey which finds them circling right back to square one, and is unafraid to make it as hard as possible to like its protagonist for much of its running time, and it's funny, intelligent, and ultimately kind of heartwarming. Hard to believe that this is from the same director as American Pie.

As Grandma opens, its protagonist, Elle (Lily Tomlin), is in the process of breaking up with her much younger girlfriend, Olivia (Judy Greer), declaring her to be a mere "footnote" in a narrative where the major storyline was Elle's 38 year relationship with her now deceased partner, Violet. The breakup sends Elle on a trip down memory lane and she's going through boxes of photos and personal artifacts she hasn't looked at in years when her granddaughter, Sage (Julia Garner), shows up and asks for her help. Specifically, she needs $600 for an abortion that is scheduled to take place in 8 hours. Between them Elle and Sage have less than $100 cash on hand, and Elle has no credit cards, having recently cut all of hers up after paying off all her debts, and thus no way to make up the difference on credit. For reasons which Elle understands all too well, Sage doesn't want to go to her mother, Judy (Marcia Gay Harden), for the money, so grandmother and granddaughter set off on an odyssey around Los Angeles, trying to scrape together enough cash in time for the appointment.

Their first stop is to the home of Sage's ex-boyfriend, who had promised to get her the money but, when they show up, casually tells her that he couldn't get it and then tries to intimidate Elle which results in him getting a hockey stick to the nuts. Other stops include meetings with a friend (Laverne Cox) who owes Elle money but can't offer anything but a free tattoo (much is made by Sage of the fact that Elle chooses to get what she calls a circle but which looks more like an "O" for Olivia); with Karl (Sam Elliott), a long ago flame of Elle's that she turns to only out of sheer desperation, but whose terms for lending it seem at first too high; and an attempt by Elle to raise the money by selling some of her first edition books to a friend, whose lowball offer results in an angry tirade from Elle. Along the way Elle and Sage also stop at a place where there used to be a women's clinic which offered abortions for free, but which is now a coffee shop that they get kicked out of when Elle won't stop loudly talking about the fact that they're trying to get an abortion (and, also, how much the coffee sucks). Eventually, inevitably, Elle and Sage end up right back where they started, their prospects having dwindled down to one last option.

Elle is a person you might politely describe as "cantankerous," a person who not only doesn't suffer fools, but probably doesn't suffer geniuses either. She's always ready with a barb and she has a tendency to create conflict where none existed before. If Tomlin receives an Oscar nomination (which she very well could; it's a commanding performance), it'll be interesting to see whether they can find a clip to show where she's not cursing up a storm. That said, the character is more than just the stereotypical "old person being bad for shock value" kind of role that Hollywood enjoys; we're given to understand that Elle has never been an easy person to get along with, but though she's got a hard shell and is prone to lashing out at others, she proves to have a good heart as evidenced by her willingness to jump into action when Sage tells her she needs help, as well as the lengths that she goes to in trying to get that help, which sometimes requires her to reopen painful wounds from her past. Between this film and her Netflix series Grace and Frankie, Tomlin is having a pretty great year as an actress and her performance here has a compelling rawness to it that makes you want to follow the character through more than just the one eventful day of the film.

In the secondary role Garner more than holds her own against Tomlin, her character never really certain whether she ought to just stand back and let Elle knock down everything she perceives as being in her path, or whether she ought to start apologizing to those they're encountering. Of the two main characters, Sage is the far more vulnerable, and appropriately Garner's performance is much softer on the surface than Tomlin's, whose character's fears and pains are hidden under more self-protective layers. As the generational bridge between the two character, Harden delivers a solid performance as Sage's type-A mother (who is so intense I have a hard time buying that she would give her kid a hippyish name like "Sage"), who both Sage and Elle are a little bit scared of but who isn't quite as much of a hardass as she seems to be at first. Collectively, the three are able to suggest a lot about the history of the family and their interrelationships so that the screenplay doesn't have to spell it all out. That screenplay, written by director Paul Weitz after working with Tomlin on the Tina Fey vehicle Admission, is witty and emotionally nuanced, never forcing its "big" moments but letting them come in a way that feels natural, giving its actors a lot to work with and then standing back and letting them run with it. Grandma is an uncommonly satisfying viewing experience.
Posted by Norma Desmond at 8:00 AM