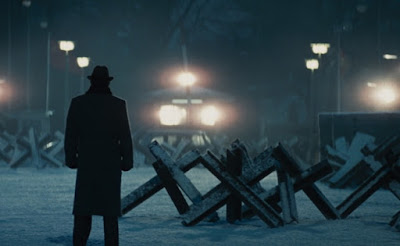 It's easy to have ideals when they aren't being challenged; it's more difficult when you have to choose whether to hold firm to those ideals even when they could achieve an undesirable outcome, or see the integrity of those ideals reduced in order ensure a favorable outcome through manipulation. Bridge of Spies is about an idealistic man who believes so firmly in what he values that he's willing to expose himself to public ridicule to stand up for it, and is willing to go a few steps further than that, too. He's the kind of character that would have been played by Spencer Tracy or James Stewart in a different era, and could only be played in this one by Tom Hanks. As played by Hanks, he's a hero without being a moralizing one, and as directed by Steven Spielberg the film is a well crafted machine that seamlessly blends the courtroom drama with the spy thriller without making it feel like two different stories shoved together.

Hanks stars as James Donovan an insurance lawyer who, in 1957, is selected to offer legal counsel to alleged Soviet spy Rudolph Abel (Mark Rylance). His selection is based in large part on his work during the Nuremberg trials a decade earlier, and though his mandate with Abel is simply to provide the necessary means for the trial to proceed in a fashion that meets the standards of justice, he isn't content to provide his client with a defense that is merely sufficient. There are problems with the way that Abel was brought in, namely a lack of search warrant which under normal circumstances would make the items seized by the FBI inadmissible at trial, but no one, including the trial Judge, wants to allow Abel to slip away on a technicality and it's made clear to Donovan that the rules are going to be bent here to ensure that Abel ends up in jail. Donovan is aghast - he sees his purpose as ensuring that Abel gets a truly fair trial, not as ensuring that Abel gets the appearance of a fair trial - and when his client is convicted, he immediately begins making plans to appeal which earn him a great deal of unpopularity and no small amount of hostility, including bullets fired into the home he shares with his wife (Amy Ryan) and their children.

Donovan takes the matter to the Supreme Court, but his advocacy for Abel comes to naught and the conviction is upheld, but Donovan's prediction that it would be in the United States' best interest to keep Abel in prison, rather than executing him, does come true when an American spy plane pilot (Austin Stowell) is shot down over the Soviet Union. Because someone purporting to be Abel's East Berlin-based wife has contacted Donovan about securing her husband's return, the CIA elects to unofficially send Donovan to East Berlin to negotiate an exchange of Abel for the American pilot, emphasizing that he will not be representing the United States and will have no official support or protection. Shortly before his arrival, however, an American student studying in West Berlin is detained on the Eastern side of the newly built Berlin wall, creating a complicated web of goals for everyone involved. Donovan wants to find a way to extract both the student and the pilot in exchange for Abel. The CIA's perspective is that bringing the pilot home is the only urgent matter and that a deal can be made at some later date for the student. The Soviet Union is only interested in an exchange of the pilot for Abel, but doesn't want to make the exchange at the same time; instead, they want the US to hand Abel over immediately while they keep the pilot a while longer, so that they'll have had the same amount of time to try to get information from him as the US has had time to try get information from Abel. The lawyer (Sebastian Koch) supposedly advocating for Abel's family is really advocating on behalf of the German Democratic Republic, which wants to use the exchange to force the US to recognize it as a nation and to assert itself against the Soviets and to do so by usurping the exchange and making it a straight exchange of Abel for the student. Whether Donovan can come up with a solution which will satisfy everyone and result in all three men ending up back in their respective homes will come right down to the wire.

For the role of Donovan, Hanks is an obvious but never less than effective choice. While the character is a straight forward good guy who seems like he would offer no real challenges for a performer, this is actually a tricky role in that it requires Hanks to spend a fair amount of time discussing the ins and outs of his character's values (which are, ostensibly, the values of America as enshrined in the Constitution), and holding down the film's moral and narrative center without being preachy about either. Employing his usual affable charm, Hanks is able to turn what might otherwise be moralizing or didactic dialogue into something compelling and dramatically alive, and provides the story with a character that it is impossible not to root for. Trickier still, the skill of Hanks' performance, its openness and humanity, helps make Abel a character you can't help rooting for, either. Rylance is great as the accused spy, a man so calm and collected that even the threat of death can barely make him blink an eye, but it's Donovan's embrace of Abel as a friend that makes him so likeable. While the film itself loses sight of that relationship to a degree in its second half, the interactions between the characters are one of the highlights of the film.

Written by Matt Charman and Joel and Ethan Coen, Bridge of Spies is a film not unlike Spielberg's last directorial effort, Lincoln, in that it's a talk-heavy film, but one in which the talk is of such vital importance that it feels almost like action. A lot of what happens over the course of the film involves Donovan shuffling between one closed room meeting with one interested faction and another, but Spielberg never lets the film feel static and uses his facility with classical cinema language to give the story the sense that it's always moving forward, even at moments when Donovan is forced to acknowledge that everyone else is behaving in such an opaque fashion that he's left not knowing what's going on even as he stands at the center of it. While Bridge of Spies never quite achieves the sense of importance or cultural endurance of Spielberg's best films, it's a handsome, solidly crafted piece that would easily be considered a major work if it came from a director who didn't already have a career spanning four decades with major works in various genres spread out across them. All told, Bridge of Spies is a great addition to Spielberg's already stacked roster of wonderful films.
Posted by Norma Desmond at 6:14 PM