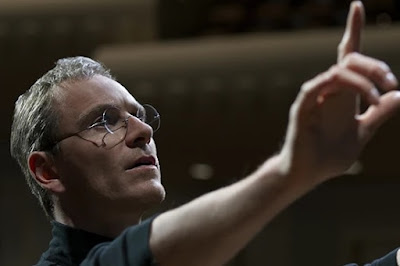 As written by Aaron Sorkin and directed by Danny Boyle, Steve Jobs is not your typical "important man" biopic. It's a biopic that unfolds in three distinct acts, each one focusing on the minutes leading up to a particular product launch, concerned less with pure historical accuracy and revealing the "real" Steve Jobs than it is with exploring the idea of Steve Jobs, pivoting around two key ideas about the man - his struggle over the fact of being adopted and his struggle to accept his role as a father to his eldest child - connected by his need for control. It isn't an especially subtle movie (if you miss the point the first time, the screenplay will circle back to it once or twice later), but it's a vibrant one and totally engrossing from beginning to end. It also adds yet another entry in Michael Fassbender's quickly growing gallery of fantastic performances.

The story unfolds across three events: the 1984 launch of the Macintosh 128k, the 1988 launch of NeXT, and the 1998 launch of the iMac. The Macintosh launch finds Jobs (Fassbender) on the verge of introducing a product which he imagines will be have the effect of the heavens opening up and the angels singing in the marketplace, if only it can be made to work properly. With Apple's landmark "1984" commercial having set the stage, Jobs is determined to live up to the hype and believes that the only way for that to happen is if the voice demo can be made to work and the computer says, "Hello," which is problematic as software designer Andy Hertzfeld (Michael Stuhlbarg) informs him that even if he had time to fix it before the presentation, he doesn't have the tools to get into the computer since Jobs designed it specifically to keep people from being able to get inside without special tools. As the clock continues to tick, Jobs juggles putting pressure on Hertzfeld to get the impossible job done, pressuring the team's other Andy, Andy Cunningham (Sarah Snook), to find a way to bypass fire codes to extinguish the lights in the Exit signs and achieve total blackness during the presentation, denying the persistent requests of Steve Wozniak (Seth Rogan) to acknowledge the team behind the Apple II, and the surprise arrival of his ex-girlfriend Chrisann (Katherine Waterston) and Lisa, the daughter that he refuses to acknowledge as his.

The situation isn't any less tense in 1988 when Jobs, having been pushed out of Apple as a result of the poor sales of the Macintosh, is launching his new venture and is inundated with ghosts of his past, including Wozniak and Hertzfeld, and Apple CEO Joe Scully (Jeff Daniels), who won the power struggle that resulted in Jobs leaving Apple. He also has to contend with the arrival of Chrisann and the now 9 year old Lisa, who by 1998 will be 19 and with whom he will experience the opposite problem when he wants her to come backstage to talk to him and she refuses. By that point Jobs is back at Apple, Scully is out, and Jobs and Wozniak are still at odds over the former's refusal to acknowledge the importance and contribution of the Apple II to the company. The other constants throughout all three sequences are the presence of Joel Pforzheimer (John Ortiz), a journalist who interviews Jobs at each event, and Joanna Hoffman (Kate Winslet), the head of the marketing who would probably prefer that Pforzheimer weren't witness to some exchanges that expose some of Jobs' sharper edges, and who acts as Jobs' confidante, champion, and pretty much the only critic he'll actually listen to.

As great a director as Danny Boyle is - and despite the fact that this is a dynamically directed film that doesn't so much try to harness the energy of the screenplay as turn it into a jet propulsion system to help barrel the story forward - he takes a backseat here as Steve Jobs is definitely a writer's movie, which is both a blessing and a curse since the screenplay is both a strength and a weakness of the film. The weakness is in the bizarrely circular dialogue which finds a character making a statement in one sequence and then that statement being revisited in later sequences by having the character say something like "Do you remember when I said to you..." It's not that that isn't realistic in terms of the fact that, for the characters, years have passed between the first utterance of the line in question and the second, but for the viewer it can be frustrating because your immediate thought is, Yes, I do remember because it literally just happened 20 minutes ago; and even though the film wears bluntness on its sleeve, I'm surprised that Sorkin couldn't find a more elegant or subtle way to revisit these exchanges. One could also make the argument that the film's depiction of Jobs is reductive, boiling him down to three things: he has a feeling of low self-worth resulting from having been adopted which has left him feeling like he isn't lovable and which becomes a self-fulfilling prophesy as he acts in such a way to ensure that no one makes the mistake of loving him, he has difficulty embracing his role as a father because becoming a parent has thrust him into a series of situations where he isn't in control, and control is what he desires above all things. All three sequences revolve around these ideas and explicitly voice them like thesis statements.

At the same time, however, Sorkin's fast paced dialogue and rapid fire exchanges crackle, and his decision to structure the narrative as three distinct sequences is an excellent one, sidestepping the typical problem with biopics by focusing on three events rather than trying to capture the essence of an entire life by manipulating all the important events into a clean narrative, which usually results in a story devolving into a series of bullet points. Further, the quick movement from event to event to event keeps things moving fast and help unfold the story with the typical Sorkin flare, which is itself elevated by the fantastic cast that has been assembled. Pretty much every time that Fassbender appears in a new movie, it's tempting to say that he's never been better, but he's truly amazing as Jobs. He doesn't particularly resemble Jobs physically, but his performance captures the essence of the Jobs mythology, the intensity and the P.T. Barnum-esque qualities of showmanship, and turns a character who might otherwise just seem like a "jerk" into a complex being. In the supporting ranks, Winslet is great as the character who functions as the angel on Jobs' shoulder, struggling to bring out the best in him and suppress the worst, Rogan is solid as Wozniak, a man who doesn't possess Jobs' ability at self-salesmanship and longs for some recognition of his own work, and Daniels and Stuhlbarg are excellent as the two men who bear the brunt of Jobs' aggression, the one playing the father figure/enemy/casualty and the other playing the contemporary who never comes out the winner in their arguments, but does come out looking like the better man. The cast of Steve Jobs is an embarrassment of riches and each more than rises to the occasion presented by the screenplay. Steve Jobs is not a film without flaws, but it's a ridiculously entertaining movie with a great deal to its credit.
Posted by Norma Desmond at 8:00 AM

Yeah, I pretty much keep hearing the same thing about this one...solid...not brilliant...but in parts it's astonishing.