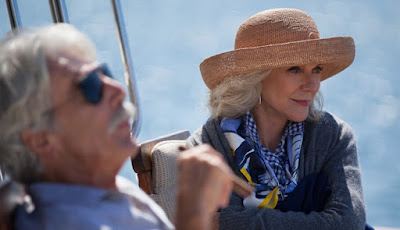 Late in Brett Haley's I'll See You in My Dreams its protagonist Carol wonders what the point is of getting attached to anyone when it means that you're just going to lose them at some point. Her fireplace mantel is already a memorial to several loved ones - human and animal - their ashes displayed prominently alongside photos. She knows so much loss already that she confesses that she's begun to feel numb to it - so what's the point? If the film, a gentle and meditative character study, can be said to contain any lesson at all, it's that the point is that without the connection provided by relationships, there's no point to any of it at all. While that may not be the most profound of statements, having been made already in countless works of fiction, it's profound enough for this very unassuming movie which acts primarily as a showcase for the talents of star Blythe Danner.

As the film opens, Carol (Danner), a widow of 20 years, has just had to put her dog to sleep. Though she has a circle of close friends - Sally (Rhea Perlman), Rona (Mary Kay Place), and Georgina (June Squibb) - that she regularly spends time with, the dog was her real companion and without her there is a noticeable void. Though she never uses the word "lonely" to describe herself, Carol certainly seems that way as depicted by the film, though she also seems like she's lonely by choice, refusing to consider moving into the retirement community where her friends all live, refusing to consider romantic involvement ever since the death of her husband. Even her relationship with her daughter, Katherine (Malin Akerman), is marked by her "arm's length" attitude, flipping the script of the trope of the grown child who never even bothers to call anymore. Katherine calls frequently; it's Carol who keeps putting off calling her back.

Things start to change when Carol finds herself forming an unexpected friendship with Lloyd (Martin Starr), the guy who cleans her pool because, as it turns out, a career writing poetry doesn't really pay the bills. He gets her to come out of her shell slightly, taking her out to do karaoke after finding out that she used to be a professional singer, but the new friendship gets pushed even further to the side in Carol's life when she meets Bill (Sam Elliott), a retiree who just wants to make the most of his time and enjoy the fruits of his labor. Despite her hesitation, and her obviously still deep grief over the loss of her husband (also named Bill), Carol quickly opens up to the possibility of trying to create something real and lasting with Bill, but just as quickly finds the rug pulled out from under her, leading to her questioning what the point of it all is in the first place.

I'll See You in My Dreams had one of the worst, most shapeless trailers I'd seen in a long time, so maybe it was because I wasn't expecting a ton from it, but I was pleasantly surprised by it. It helps immensely that it puts Danner at the center and then has enough confidence to trust that even as she's keeping so much about Carol on the inside, the performance will nevertheless be compelling. Carol's not an unlikable character by any stretch, but the film does give the sense, largely through the brief scenes between Carol and Katherine, that she can be a bit prickly and she's definitely really closed off. One might argue that I'll See You in My Dreams is a portrait of depression, given how Carol is not just surrounded by the grief of her past, but that she exists in a sort of stasis, unable to move forward with anyone and fixated on the fact that everything is behind her, relegated to the past. Carol is able to function on a day in/day out basis, but there's something quietly despairing about her for a good portion of the film that only begins to lift once she starts opening herself up to new people, and Danner makes that transition so smoothly that it's almost imperceptible.

Danner is the greatest asset of I'll See You in My Dreams, though in the smaller roles of the two new men in her life, both Elliot and Starr are also quite good. The second feature film of writer/director Haley, I'll See You in My Dreams can be a bit uneven at times and when it veers into more overtly comedic situations, it tends to lose the beat (there's an extended sequence during which Carol and her friends some pot that has a forced sense of wackiness to it that doesn't really work and makes the whole thing feel like it's been beamed in from a different, less subtle movie), but overall the film is a solidly made piece of work. It's a minor film, to be sure, but it's one with many small pleasures.
Posted by Norma Desmond at 6:26 PM