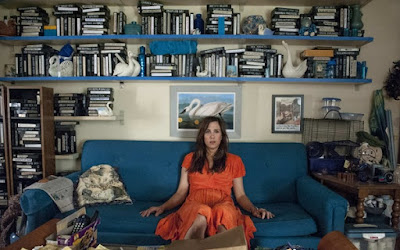 I'm not quite sure whether Welcome to Me is brilliant or bonkers. It has a bold premise, to be sure, but even after two viewings I'm not entirely sure whether it's an incisive look at our increasingly narcissistic, navel gazing culture, or a misguided project that tries to wring laughs out of the exploits and exploitation of a person with a mental illness without ever making a solid point about what's going on. The only thing I know for sure is that it features a really good performance from star Kristen Wiig, who probably could have parlayed the success of Bridesmaids into Melissa McCarthy-level commercial success in broad comedy, but has instead opted to take her career in a stranger, more interesting direction, even if the movies that she chooses aren't always up to the same level of her performances in them.

Wiig stars as Alice Klieg, a woman with borderline personality disorder who can't feel comfortable in a room unless the television is on and has difficulty interacting with others because of her tendency to say inappropriate things, in addition to her sometimes abrupt mood swings and her intense self-absorption. When she wins an $86 million jackpot playing the lotto, she decides to take some drastic action in her life, taking herself off of the medication that she feels she no longer needs now that she's on a "high protein diet" and telling her therapist (Tim Robbins) that she's no longer going to be seeing him because she'll no longer be required to in order to receive disability benefits. She also moves herself into a casino hotel on a reservation and decides that she wants to have her own TV show, pitching the idea to Gabe (Wes Bentley) and Rich (James Marsden), two brothers who own a modest studio that's used primarily for infomercials. When asked what her show would be about, she states that it would simply be about herself - she won't be selling anything, interviewing anyone, or discussing current events; she's just going to talk about herself. When Rich estimates the cost of each of the 100 two hour episodes she wants to make, she promptly writes out a cheque for $15 million and "Welcome to Me" is suddenly in business, though Rich is the only one who seems to have no misgivings about the endeavor.

With a team in place which includes Rich and Gabe as well as producer Deb (Jennifer Jason Leigh) and director Dawn (Joan Cusack), "Welcome to Me" unfolds as a bizarre mishmash of things including segments where Alice cooks something and then spends 20 minutes eating it in front of the audience, reenactments of moments from Alice's childhood played out by actors with Alice stopping the scene dead in order to scream about the injustices perpetrated by the person who once did her wrong, telephone calls between Alice and her mother, her therapist, and viewers, and a recurring segment in which Alice neuters dogs on the air. As her star, such as it is, rises, Alice's increasing selfishness begins to cost her the people in her life. Her therapist drops her after finding out that she tricked him into appearing on her show by phone, her best friend Gina (Linda Cardellini) lashes out at her for her lack of empathy after she fails to display any concern when Gina loses her job, her budding romance with Gabe falls apart when she has a dalliance with Rainer (Thomas Mann), a college student who thinks that her show is some sort of brilliant social commentary, Deb walks off the show in frustration, and Rich stops humoring her once he learns that Alice's on-air comments have inspired multiple lawsuits for slander. Having gotten everything she thought she wanted, Alice suddenly realizes that she has nothing and begins to slip even further off the rails.

There's something to be said for Welcome to Me's premise, which has the potential for a goldmine of wit and insight. Given our current culture of aggressive self-involvement, someone wanting to host a show that involved nothing more than them talking about themselves and doing random things doesn't require any real suspension of disbelief, nor does the idea that some desperate producers might go for it - though in reality Alice would probably just start a Youtube channel and make money off of it, rather than invest money to air it on TV. It's also not outside of the realm of possibility that a production company on the verge of collapse might exploit a person with a mental illness in the hope that the "trainwreck" factor would be enough to gain ratings based on curiosity which would allow them to stay in business. The problem with Welcome to Me is that for as much as it seems to be commenting on these ideas, it's also getting a fair bit of mileage out of making Alice's mental illness, and the fact that she does and says some strange things because of it, the centerpiece of its comedy, and you can't have it both ways. You can't implicitly take the position that the people exploiting her issues and treating her like a freak show are in the wrong while at the same time making her and her issues the butt of the joke, and all too often things play out so that Alice is made to seem like the joke.

Despite this, and despite the fact that Wiig is still best known as a comedic actor, her performance as Alice is actually one of the few things in the movie which really work. She doesn't mug or play up the wackiness of the situation; she instead underplays things more often than not, turning inward and treating Alice's unusual behavior as firmly rooted parts of her personality rather than tics or eccentricities. Because of her years on Saturday Night Live, when she appears on screen she brings with her a certain expectation that she's about to do something funny (in the screening of The Martian I saw the first shot she appeared in inspired anticipatory giggles from the audience, even though there was no reason to think her character would be comic relief and, in fact, she wasn't), but she really works against that idea here and gives a performance that digs deep. The film itself is never as assured as her performance, though, and aside from Wiig, Welcome to Me is an uneven piece of work that doesn't really seem to know what it wants to be or what it wants to say.
Posted by Norma Desmond at 8:00 AM