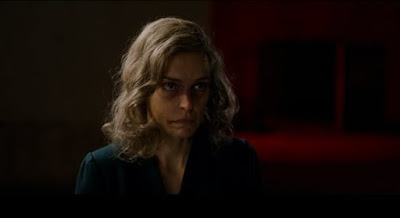 The doctor tries to put an optimistic spin on it, telling her that she can have a new face that will allow her to reinvent herself for the post-war world, get a fresh start, leave the horrors of the past behind. But she doesn't want a new face or a new identity or a new life. She wants to look like herself and resume the life she was living before. After an experience that has stripped her of everything - her freedom, her family, her dignity, her face and nearly her life - illusion will be the last thing to go. But as she moves through the physical and social ruins of post-war Berlin, her need to remember is at odds with a nation already in the process of trying to forget. The sixth collaboration between director Christian Petzold and actress Nina Hoss, Phoenix may be their greatest and most deeply felt film yet.

The premise of Phoenix may sound overly convoluted when trying to explain it, but it's actually pretty straightforward. Hoss stars as Nelly Lenz, a Holocaust survivor who has been located by her friend, Lene (Nina Kuzendorf), after being liberated from a concentration camp and brought back to Berlin to undergo facial reconstruction surgery to repair the damage after taking a bullet to the head. Nelly is the only surviving member of her family and, while she recovers from her surgery, Lene works to recover the considerable family assets which were seized by the Nazis and are now owing to Nelly, and makes plans for them to leave Germany and go to Palestine to assist with the creation of a Jewish state. However, all Nelly can think about is finding her husband, Johnny (Ronald Zehrfeld), and she refuses to listen when Lene insists that he's a traitor who not only abandoned her, but is likely the one who denounced her to the Nazis in the first place in order to save himself. When she's sufficiently recovered, Nelly begins going out at night, searching for Johnny in the cabarets of the American quarter, eventually finding him working as a waiter in a club called "Phoenix." When she comes face-to-face with him, however, she's distressed to realize that he has no idea who she is, the surgeon only having been able to make her look as much like herself as possible but unable to reconstruct her face exactly, and leaves without revealing her identity to him.

When Nelly goes looking for Johnny again, he makes her a proposition. He explains to her that his wife died in the camps and was the heir to a considerable sum of money which he wants to get for himself. Since he thinks she bears a passing resemblance to his wife, he's come up with a plan for her to impersonate Nelly so that he can gain the inheritance, offering her a cut of the proceeds for her help. Hoping that by spending time with him "becoming" Nelly she can make him fall in love with her all over again, Nelly agrees to help him and moves into his small apartment so that he can begin coaching her on how to act, dress, and carry herself like Nelly. The plan is that once she's perfected the act, he'll tell their friends that he's received a letter from her revealing that she's actually alive and then she will "return" to Berlin by train to reunite with him and make her claim for the inheritance. The more time they spend together, the more Nelly becomes convinced that Johnny couldn't have betrayed her, telling Lene that "he really did love her." But Nelly doesn't know what Lene does, and it's only as she begins to become more and more her old self (or, at least, the version of Nelly that Johnny directs her to become) that her eyes start to become opened.

There's more than a hint of Vertigo to this story, where a significant portion of time is spent with a man telling a woman how to act, how to dress, and how to make herself up, and where the woman in turn struggles over the fact that he's not seeing her, but only seeing her potential to be what he wants her to be. In this case, that struggle is deep and painful, as Nelly really is the woman that Johnny is trying to turn her into, but she can't make him see that. All he sees are the ways that she's falling short because, rather than looking and acting like the wife who was taken away to the camps, she looks and acts like someone who has just come out of the camps. For his plan to work, this stranger-as-Nelly has to "return" from the camps, but what he imagines and tries to stage manage is far more glamorous than reality, a vision in which his wife, decked out in a red dress and shoes from Paris, her hair done up, her make up on point, is exactly the woman that he and their friends remember, exactly how they remember her, and without the weight of any mental baggage from her time away. When she begins to grow frustrated with his vision, insisting that someone returning from the camps wouldn't look the way he wants her to look or act the way he wants her to act, and when she tries to tell him a story about life in the camp, explaining that people will ask, that they'll want to know what it was like, he cuts her off. No one will ask, he tells her. No one wants to know; everyone will want to believe the lie.

That conflict between the German-Jewish experience, the horror and the almost impossible survival, with the non-Jewish German experience, the shame and the desire to move forward and forget, drives the narrative engine in Phoenix. As any study of Germany in the years immediately following the war will confirm, the preferred method of dealing with the legacy of the Holocaust was to not deal with it at all, to consign it to history as something carried out by the evil few rather than the compliant many, and that's the attitude that Nelly finds herself coming up against over and over again through the film. Many of the film's non-Jewish Germans want to believe that a woman can walk out of the camps looking like she's just returned from holiday because it alleviates their own guilt for something that they were, at the very least, silently complicit with even if they were not actively Nazis or working with the Nazis. They want to move forward, erasing as much of the shameful history as possible, a fact which is made brutally clear to Nelly when Johnny tells her, believing her to be the non-Jewish impostor, that the final step of her physical transformation will be cutting out a chunk of her forearm so that she can explain to people that she cut out the tattoo, and in that way cover up the fact that she never had one to begin with (which, of course, she actually does). As the conflict between Nelly and Lene rises with Nelly's continued investment in reuniting with Johnny, Lene laments the fact that the survivors are too willing to "forgive" and let everyone go on with their lives, but the problem isn't really the forgiving, it's the fact that the need to be forgiven isn't even being acknowledged, let alone requested.

Petzold unfolds the narrative at a brisk pace, but does so in a way that allows it to hit all of the necessary emotional beats, leaving you feeling emotionally drained by the time it reaches its end. In the hands of a lesser storyteller, Phoenix would get lost in its own premise and stuck on its more ludicrous aspects, but Petzold keeps it emotionally grounded and character driven. He's helped in that respect by Hoss' absolutely devastating performance as Nelly, who begins the film a shell shocked victim shuffling around and uncertain of her place in the world, and gradually emerges as a woman who has seized her identity for herself and come to terms with certain ugly truths. In between she is often desperate - desperate for Johnny to recognize her, desperate to absolve him of guilt and later to excuse him for it, desperate to believe that if she can have him back, then it was all worth it - but the rawness of Hoss' performance leaves you unable to look away. With her haunting performance at its center, Phoenix is an utterly spellbinding film that digs far deeper than you expect it to.
Posted by Norma Desmond at 8:00 AM