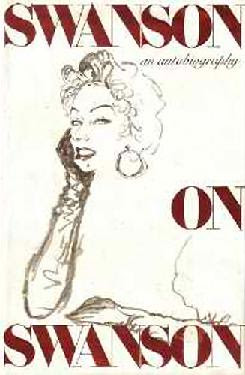 The great thing about an iconic performance is that it will live forever, becoming a part of pop culture that will not be forgotten. The bad thing about an iconic performance is that the character can become so melded with the image of the actor, that the two become inseparable in the eyes of the public. Because she had some surface similarities to Norma Desmond, some considered (and still do consider) Sunset Blvd. in the light of autobiography, to the point where Gloria Swanson felt it necessary to point out, “I’ve got nobody floating in my swimming pool.” Gloria Swanson was Norma Desmond, but Norma Desmond was not Gloria Swanson. Which isn’t to say that Gloria Swanson wasn’t just a little bit crazy, but that she was crazy in more ordinary, typical ways than was Norma Desmond.

There’s a pattern that plays out again and again in Swanson’s autobiography Swanson on Swanson. She meets a man who has lots of plans, she becomes convinced that he’ll be able to take care of her and hands over management of her finances to him, discovers when it’s almost too late that he’s totally screwed her over, and then kicks him to the curb, regroups, and starts over, if not exactly from zero, than certainly much lower than she ought to be, all things considered. This isn’t strictly true of all of her relationships with men, but it happens often enough that by the time she gets to the part about her relationship with Joseph Kennedy, who she obviously didn’t marry but might as well have given that he did almost as much financial damage as a couple of her husbands and tried to talk her into having a baby with him despite the fact that they were both married to other people, you can only shake your head at how slow she is to learn a lesson. Her is a story of making a fortune, losing a large part of it, then building it back up again in time to start her next relationship, and start the cycle again.

Swanson was married six times and only twice happily (to third husband Henri de la Falaise and to her final husband, William Dufty), but at least had the good fortune to have enjoyed her more scandalous relationships before the rise of tabloid culture (Elizabeth Taylor, I’m sure, would have been envious at moments). Swanson is very candid throughout Swanson on Swanson and never sugar-coats the less than savory aspects of her relationships (her marriage to first husband, Wallace Beery, comes across as especially horrific), though naturally her account is biased in her own favor. For any reader with an interest in how business was done in Hollywood during the silent era, it’s an excellent read because Swanson, who was not just one of the biggest stars of her era but also became a producer, goes into great detail about that aspect and much of her narrative is about the blood, sweat and tears that went into trying to get her films off the ground and onto screens (or, in the case of the disastrous Queen Kelly, the process of how a seemingly great idea transformed into a slow motion train wreck).

What’s missing from Swanson on Swanson are the details of her Hollywood “comeback” with Sunset Blvd. Though she reveals a little bit about the experience of being nominated for an Oscar (she didn’t attend the ceremony, as she was performing on Broadway at the time), and generally speaks fondly of the experience of working on the film, she doesn’t really get into any of the behind the scenes, making of stories and, in comparison to the amount of detail she goes into about her earlier films, really just glosses over it. This is understandable, maybe, because the performance and the film have become so defining in terms of her public persona, and perhaps she felt there was nothing more to say on the subject, but it is a bit disappointing given that it’s such a great film and often cited as the best film ever made about Hollywood.

That being said, Swanson is a good storyteller who led a fascinating and sometimes turbulent life, and although the book is just a little bit longer than it absolutely needs to be, it’s still an engaging and interesting read.

Next Month: The Prince, the Showgirl, and Me
Posted by Norma Desmond at 8:00 AM