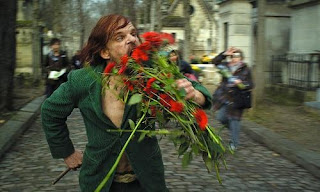 Holy Motors is nothing and it is everything. Sometimes beautiful, sometimes grotesque, never boring, it's a film free of the strictures of narrative, and fully about the construction of characters. It's the very definition of a cinematic acquired taste, a deranged whirlwind of a film that hits the reset in every scene, spinning wildly between genres and tones, and throwing out surprises at every corner. It's an oddity, but it's the kind that sticks with you and, in fact, refuses to get out of your head once it's in there.

Holy Motors follows a day in the life of Mr. Oscar (Denis Lavant), who gets up in the morning, gets into a white limo and is driven by Celine (Edith Scob) to various appointments. What his job is, exactly, is never really clear; he simply goes around playing a series of characters, and using make up, costumes and props, in a series of situations with increasingly high stakes. He plays an old woman begging for change on a street corner, an actor doing performance capture stunt work followed by a sex scene with another performer, a man on his deathbed saying goodbye to a loved one, and an exasperated father dealing with a teenage daughter, with little to no context provided beyond the scenes themselves. In one of the more elaborate scenarios, he plays a gangster who assassinates his doppelganger and then attempts to switch identities with him, only to end up on the wrong side of a knife. In another scene, he gets shot multiple times and then gets up and walks away with Celine.

The purpose of Mr. Oscar's role play is never really made clear. At one point he's joined in the back of a limo by a man who may be his boss and who laments that Mr. Oscar's heart doesn't really seem to be in it anymore. Mr. Oscar admits that it's true and explains that he misses the cameras, which are now so small that you can't even see them. Is he a journeyman actor and are we seeing the roles he's playing in various projects? We don't know. Late in the film he runs into a former lover (Kylie Minogue) who is in the same line of business, playing various roles for an unknown purpose. Her latest scene ends on a note of finality but, then again, Mr. Oscar is killed at least twice and lives to play another scene so there's really no telling what's real and what's "real." The world of Holy Motors is one of endless possibility and imagination, where story, character and genre are always fluid, never fixed.

The success of Holy Motors depends primarily on two things. One is the skill of Lavant, who we watch slip into and out of multiple characters and who makes each of them believable within the span of their sequence; and his willingness to "go there" with them. The sequence where he plays Monsieur Merde is particularly impressive, requiring him to play a sewer creature who bites off a woman's fingers, kidnaps a model (Eva Mendes) from a photo shoot, takes her to his lair, creates a makeshift burqa for her and then... well, let's just say it gets more bizarre from there and it all happens without Lavant or Mendes uttering a word. Lavant's performance is one where no holds are barred and he repays the freedom offered to him here by turning in a series of masterful character sketches that add up to one amazing whole.

The second thing that Holy Motors depends on is Carax's ability to keep the project from flying off the tracks. A film like this one wouldn't work in the hands of many directors and the end product would play like a bunch of loosely connected, half-formed ideas. Carax demonstrates a firm hand that not only makes it feel like he's utterly in control of what's going on, but also allows the sequences to flow into each other in a way that seems seamless, and the film to land on the right side of pretension. Some viewers would no doubt disagree with that last statement, but I think that Holy Motors ultimately has far too much to say about the art of creating characters and the worlds that give them meaning to be dismissed so easily. I can definitely understand why some people hate this movie - it's the kind that inspires strong feelings - but I think it's well worth the time.
Posted by Norma Desmond at 8:00 AM