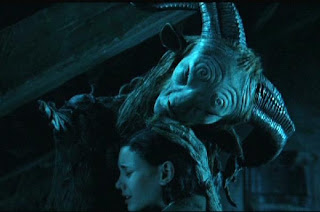 Fairytales may be geared towards children, but they are built on darkness, on terrifying creatures and characters dying awful deaths; they present the horrors of reality in stark, simple terms that children can understand, creating a black and white world where the division between good and evil is always clear. Guillermo Del Torro’s Pan’s Labyrinth is told in such terms, while also finding a way to dig deeper, locking reality and fantasy together in an unflinching, yet beautiful, tale of brutality and war as seen through the eyes of a 12-year-old girl.

Deep in the countryside of Franco’s Spain, Ofelia (Ivanna Baqueror), the heroine of Pan’s Labyrinth, finds herself at the intersection of the world of childhood, defined in accordance with the fairytales which she continues to hold dear despite the assertions of her mother (Ariadna Gil) that she’s too old for them; and the world of adults, ruled over by her new stepfather, the Captain (Sergi Lopez), a cold and sadistic man fixated on securing his legacy by slaughtering the rebels hiding in the mountains, and by ensuring that his soon-to-be-born son will live as much in his shadow as he has lived in the shadow of his own father, a famed General. Ofelia dislikes her stepfather as much as he dislikes her, and escapes into a world of fantasy where she’s promised a reunion in another world with her real father. The dangers of the fantasy world mirror the dangers of the real world, where not only is the house in which she’s living in the middle of a warzone, but is ruled over by a man who obviously can’t wait to be rid of her.

The fantasy realm is opened to Ofelia by the Faun, who appears and reveals to her that she is actually a Princess whose “real life” and kingdom are underground and that she can return to them if she completes three tasks. Each task requires her to collect something (a key, a dagger), but also imparts a lesson meant to aide in the growth of her character, and which collectively prove her to be worthy of returning to her kingdom. While in the real world men and women find themselves struggling the navigate the sharp division between what is morally right and what is legally demanded of them, Ofelia is contending with her own harsh lessons in when to obey authority and when to rebel against it. Blindly obeying the powers that be without ever questioning their motives is how people like the Captain go through life, but the choice to do otherwise is not an easy one: the doctor (Alex Angulo), who collaborates with the rebels under the Captain’s nose, takes a stand for what’s right but is murdered for it; likewise, Ofelia will pay a price, but in the world of the film, punishment in one world gives way to reward in another.

Pan’s Labyrinth works because the narrative is constructed to leave it open to interpretation, allowing it to be read as a straight fairytale, in which case the ending is happy, or as a story in which Ofelia creates a fantasy world in order to escape the brutal realities with which she would otherwise be unable to cope. Its storytelling strength is supported by a stunning visual design, which not only brings the creatures of the fantasy realm to life in ways that are sometimes beautiful and sometimes ugly (but always astonishing), but also gives the film a beautiful flair and breathtaking cinematic sweep. In one of the film’s most gorgeously rendered sequences, a gloriously melancholy sequence in which “reality” and “fantasy” bleed into each other, Ofelia tells a story about a flower that would bestow immortality, if only anyone was brave enough to try to reach it by climbing a mountain covered in poisonous thorns. The moral of the story is that to gain immorality, you must focus on life rather than death (you would be poisoned by climbing the mountain, but the poison wouldn’t affect you if you reached the flower and gained immortality). Throughout the film, the Captain is focused on death and his own legacy after death (a form of immortality), but as he’s about to die, he’s told that his son won’t even be told his name, and so finds his chance at immortality snatched away from him. By contrast, Ofelia, when faced with death, is focused on life (specifically, saving that of her baby brother), and when she meets her end, she gains immortality by being welcomed back into the other world. The Captain will fade from memory, but Ofelia will live forever. Truly, a happy ending.
Posted by Norma Desmond at 8:00 AM