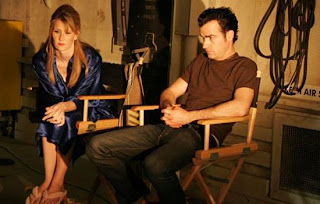 There will come a time when everyone who watches a lot of movies will find themselves at the strange intersection where "quality" crosses with "dislike." I didn't like Inland Empire, David Lynch's spiritual successor to Mulholand Drive, but I know that it's good, perhaps even approaching genius. Although I find the aesthetic of the film off-putting (which is perhaps shallow, but film is about style and substance, look and feel), I recognize the complexity and delicate density of the narrative; and although I couldn't connect to the film as a whole on an emotional level, I found Laura Dern's performance alternately moving and mesmerizing - it is surely one of the best performances of the last ten years.

Dern stars as Nikki Grace, a movie star who hopes to revive her flagging career with a role in a film called "On High in Blue Tomorrows." She's visited by a neighbor (Grace Zabriskie), who asks her a series of ominous questions, including whether the film is about marriage and murder. It isn't but, as it turns out, it is. When they sign on to the project, Nikki and her co-star, Devon Berk (Justin Theroux), are unaware that the film is a remake of a film called "47," which was abandoned mid-shoot after its two leads were murdered, leaving people believing that the project was cursed. Strange things happen on the set and Nikki finds herself becoming her character, Sue, and beginning an affair with Devon, as his character, Billy. Time and reality fold in on themselves, and Nikki/Sue discovers that she was the cause of the mysterious disturbance on set, which means that in that moment she existed in two places at once. She flees and is chased by Devon (who doesn't realize who he is chasing) and escapes into one of the sets, at which point reality (as well as continuity) is really upended.

There are various plotlines that begin to weave around each other. When Nikki goes into the set, she encounters a room full of prostitutes who, at one point, do a dance routine to the song "LocoMotion." There's a plotline involving Polish circus artists and prostitutes, one involving a sitcom starring three rabbits who speak cryptically and to the accompaniment of a laugh track, and more prostitutes, this time along Hollywood Boulevard, this time seemingly part of the film that Nikki is making, in which her character spots her doppelganger, gets stabbed with a screwdriver, and then dies in the street, where she will have "no more blue tomorrows." The director (Jeremy Irons) yells "cut" and Nikki gets up, wanders into a movie theater, and the various plotlines come together. But did any of it (including the making of the film) actually happen? The ending is ambiguous and it all may have been in Nikki's head - or the head of her strange neighbor.

There's a lot going on in Inland Empire and it's probably best to just go with it rather than try to sort out the plot lines and chronologies therein. Lynch shot the film without a screenplay, writing it scene by scene and day by day. That the film isn't complete chaos is a testament to his ability as a storyteller and his skill at assembling sometimes jagged pieces together. The film picks up the nightmare thread left off by Mulholland Drive, portraying Hollywood as a hellish place that devours, rather than fulfills, dreams and turns reality inside out. This time instead of focusing the story on a wannabe who tries to rewrite her narrative, Lynch makes his protagonist a star trying to stall her career's free fall and achieving little more than madness. As Nikki/Sue, Dern delivers an absolutely stellar performance which is all the more impressive when considered against the film's loose production method. The character (characters?) goes through various permutations as the story progresses, but Dern's performance is always on point, playing out like a dazzling highwire act.

Inland Empire is sort of like a cinematic rorschach test - there are a multitude of ways to read it, and paths to follow within it, and it will mean different things to different viewers. Some will love it, others will hate it - maybe even for the same reasons. Personally, while there's a lot about Inland Empire that I admire, and a lot of individual pieces that I think are brilliant, I couldn't really sink into it and engage with it as a whole.
Posted by Norma Desmond at 8:00 AM