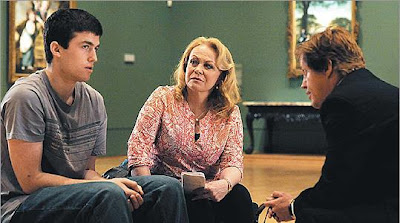 Crime movies are a dime a dozen. Great crime movies (like great movies of any genre) are rare and special. Ben Michôd’s debut film Animal Kingdom is a great crime movie. It’s great because of the way it elevates the tropes of the genre, and it’s great because it is also a character study and a family drama woven into a crime narrative. Loosely based on the story of a real Australian crime family, the film is a carefully etched portrait of dysfunction and brutality that practically demands multiple viewings because it’s so brilliantly put together.

Animal Kingdom is about the Cody family, run by the deceptively sweet matriarch Smurf (Jacki Weaver, in an Oscar nominated performance) and her eldest son, Pope (Ben Mendelsohn). The gang includes younger sons Craig (Sullivan Stapleton) and Darren (Luke Ford), and family friend Baz (Joel Edgerton), and is seen through the eyes of J (James Frecheville), Smurf’s teenage grandson by a now deceased daughter who had tried to distance herself as much as possible from her family and their influence. When he first arrives into Smurf’s care, J doesn’t really know what his family is about and doesn’t seem to understand or recognize (or want to) what’s going on around him. He’s not part of the family business himself (at least not yet), but he has access to information if only he’ll make himself see things for what they really are. Leckie (Guy Pearce), a detective in charge of an investigation aiming to take the gang down, recognizes this and pegs J as the weak link who could give the police the point of entry that they need. Leckie tries to convince J that the family would sacrifice him just as soon as protect him, depending on the circumstances, and as it turns out this is true – in one of the film’s most chilling scenes, Smurf forgoes her maternal softness in favour of sharp practicality, revealing the Codys' world to be one where dog eats dog.

Animal Kingdom is the very definition of a “slow burner.” It builds at a very deliberate pace, carefully constructing the frame of the narrative and allowing the momentum to mirror to growing awareness of J once he’s thrust into the deep end of his family’s crime empire. J begins the story as an incredibly passive character, so detached and isolated from his surroundings that as the film opens he’s sitting calmly on the couch next to his dead mother. It isn’t until J starts to become more active and develop some sense of agency that the narrative begins to pick up the pace, a shift that is incredibly effective because the slowness of the first half lulls you into one mind set and your system gets a bit of a shock when the action ramps up in the second half.

Animal Kingdom is successful both because of the meticulous way that the narrative is built, and because Michôd establishes and explores the characters in a way that is efficient without sacrificing depth, sketching them out in simplistic terms and then digging deeper as the story gets more involved. Smurf and Pope are the leaders, capable of incredible cruelty and of ruthlessly taking charge. Craig and Darren are followers, sometimes behaving like small children when things go wrong, quick to panic and in need of protection. J is a wild card, whose place is yet to be determined and could go either way. Michôd takes his time, watching the characters and waiting, letting a natural tension build up around them so that when they finally do start to make their moves, the impact is all the greater. He’s aided in this, of course, by the performances, which run the gamut from good to excellent, though Weaver's is the standout. Her performance here is surely one of the best in the last decade, whether she's affectionate and maternal, calmly sipping tea while the police raid her house, or bringing down the hammer in a way that will make a chill run up your spine. "We do what we have to," she says at one point, "we do what we must. Just because we don't want to do something, doesn't mean it can't be done." The family business isn't pretty, but you do what you have to do - even if it means putting a bullet in one of your own family members.
Posted by Norma Desmond at 8:00 AM