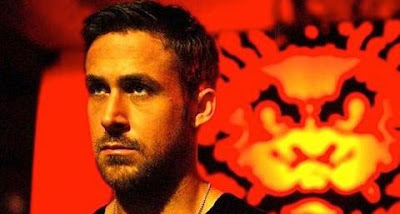 The beautiful room is empty. In a Bangkok soaked with red even when it isn’t dripping with blood, writer/director Nicholas Winding Refn sets a tale of revenge and reprisal in desperate need of a pulse. Even in scenes of its most brutal violence, Only God Forgives sits lifelessly on the screen, gorgeously, artistically mounted, but absolutely empty and devoid of purpose. Although I admire Refn’s boldness and willingness to take risks, this movie is an exercise in form without the developed narrative framework to hang it on and flesh it out.

Brothers Julian (Ryan Gosling) and Billy (Tom Burke) are American expats living in Thailand, running a drug smuggling operation and the boxing club which acts as its front. After Billy rapes and murders a teenage prostitute, and is in turn murdered by the girl’s father, Julian is tasked with finding his brother’s killer and bringing him to “justice.” It’s Julian and Billy’s mother, Crystal (an effectively brassy Kristin Scott Thomas), who is hell bent on vengeance, dismissing Julian’s acknowledgment of Billy’s own crimes with a cold, “I’m sure he had his reasons.” When Julian refuses to follow through on revenge after finding out what Billy did to earn his death in the first place, Crystal sends members of the family’s crew to kill the two men she holds responsible for Billy’s death – the father of the girl, and the police officer known as “the Angel of Vengeance” (Vithaya Pansringarm), who allowed the father to murder Billy in order to avenge his daughter, and then cut off the father’s arm as punishment for exploiting his daughter in the first place.

As his nickname might suggest, the Angel of Vengeance is not easy to kill, and by putting out a hit on him, Crystal starts a war that she can’t quite follow through with. The men who are supposed to carry out the hit are discovered and killed (the architect of the plot is tortured and killed in particularly vicious fashion), and the Angel of Vengeance sets his sights on Crystal – but not before Julian challenges him to a boxing match and gets thoroughly and decisively beaten. Relying on what remains of Julian’s filial piety, Crystal asks Julian to protect her once more, as he did before by killing his father. He agrees, but there's no easy way out of this fix - and maybe no way out at all.

It may be easiest to describe Only God Forgives as a story about a man caught between God and the devil. The Angel of Vengeance sees himself as “God” (Old Testament God, given his penchant for violence) and metes out what he sees as appropriate punishments for misdeeds. Crystal is the devil whose influence has corrupted both of her sons. Julian killed his father and as a consequence is obsessed with his hands (shots of his hands, clenched or otherwise, are a consistent motif throughout the film) and if idle hands are the devil’s workshop, then what becomes of Julian may be less punishment than it is absolution, the true freedom from the devil’s authority.

Gosling’s performance – his most laconic and muted to date – fits then with that idea, because despite the violence that Julian is capable of, he’s ultimately a passive character, the plaything of the devil and the object to be reclaimed by God. The problem with the film is that it matches Gosling’s subdued performance note for note and in doing so eliminates any sense of urgency that the story might otherwise have. The film sleepwalks its way through the nightmarish dreamscape that Refn has created, making what might be read as a point about the Western imperialist exploitation of poorer Asian nations and peoples (the Angel of Vengeance’s raise d’être is protecting women and girls from brutality at the hands of men), but really just drifting from one cool looking shot to the next. The film looks great, even in its moments of brutality, but it’s difficult for onscreen deaths to have any impact when the film itself has no life in it. There’s a limpness to the proceedings, as if the film can’t quite sustain its interest in itself. Beautiful, but empty.
Posted by Norma Desmond at 8:00 AM