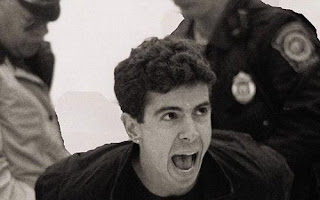 Although David France's documentary How to Survive a Plague would be an interesting watch at any time, it's particularly interesting in the wake of the US Supreme Court's DOMA ruling. While liberal minded people greeted the news with a mixture of relieved sigh and exasperated, "It's about time" (because, really, it's beyond time), it's important to remember that as slow as progress seems right now, as it's happening, in the grand scheme of things society has made incredible strides in a short period of time. Right now same-sex marriage is gaining a foothold in US law and a record number of US citizens support making it legal. Just a couple of decades ago hospitals were allowed to turn people dying of AIDS away and refuse them treatment, while those in power were allowed to ignore a health crisis that decimated a community because that community was considered morally and politically undesirable. There's still a long way to go towards equality, but to go from "let them die" to "let them marry" within the span of about 30 years is still a pretty amazing leap.

Using a mix of archival footage and interviews, How to Survive a Plague documents the HIV/AIDS epidemic in the United States and the efforts of the activist group ACT UP to force the government to deal with it. Because at the beginning of the crisis AIDS was popularly considered a "gay disease," spread by immoral and dangerous sexual behavior, politicians and other people in power could get away with not caring about it, doing nothing while hundreds of thousands (and, eventually, millions) of lives were lost. Written off by society, the members of ACT UP had to take it on themselves to gather and spread information about the disease, it's transmission, and potential treatments, to pressure health and drug organizations to make research a priority, and to force the issue onto politicians and the media. They staged protests and forced their way onto committees, refusing to be shut out of an issue that was literally life and death to them. Gains were made slowly, but often one step forward would lead to two steps back: A drug was finally approved for treatment, but its annual cost far exceeded what most could be expected to afford, and it also caused blindness; ACT UP gained political ground, but then warring factions within it caused a split into two separate groups with competing agendas; the movement succeeded in making AIDS an issue during the 1992 Presidential election, but neither of the major candidates was someone they felt could be trusted to make good on promises to do something about it. How to Survive a Plague is about progress as it's happening - slow, painful, heartbreaking progress, charting it from year to year, the death toll rising and the major players keenly aware that they might not live to see their goals met.

The men and women (mostly men) who feature in the footage used in the film give a human face to the crisis, and humanity to the film. Diagnosed at a time when it was still considered a swift death sentence, they pursue their activism with intensity, fully aware of how urgent the situation is. One, Bob Rafsky, attends a political event and heckles Bill Clinton about his lack of support for those fighting for research funding and awareness of HIV/AIDS, prompting Clinton to reply, "I feel your pain." I have no idea how that played at the time (I would've only been 9), but in the context of the film, it feels like the hollowest of soundbites. As a gay man with HIV, Rafsky was treated like a pariah by his own government, blamed by politicians for bringing his illness on himself (it is appalling to see news footage of George Bush, Jesse Helms, and prominent members of the Catholic Church openly making such statements, knowing that the fallout for them would have been minimal outside of the gay and gay allied community), denied health care, watched countless friends and acquaintances die, some of whom endured the further indignity of having their corpses packed into garbage bags by the hospital and turned away by funeral homes - in what universe could the Clinton of 1992 have understood that, particularly when his assertion of feeling Rafsky's pain was just one part of a response meant to shut Rafsky up so that Clinton could move on to discussing other matters? The gulf between those with the legislative power to enact change and those suffering was so wide it's amazing that it was ever bridged.

The majority of the film is made up of archival footage depicting ACT UP meetings and protests, as well as news footage, with interviews used judiciously. The interviews become more prominent at the end of the film, where How to Survive a Plague undercuts your expectations of this type of story and thereby gains a new level of poignancy. If you've seen other documentaries that follow the same time period (for example, the also excellent Common Threads: Stories from the Quilt), you're accustomed to coming to the end of the film and knowing that those who feature in it passed away not too long after filming ended. Many of the men in this film, in footage from the late 80s and early 90s, openly talk about how they expect to be dead within a few years. For some, including Rafsky, that's true. But many of those featured here, whom we follow year after year, struggle after struggle, are still alive, which is surprising and inspiring given what this film shows. How to Survive a Plague is anger inducing, but it's also ultimately very uplifting, showing people who literally spent years fighting for their lives (for the right to live) and, despite all odds, lived to enjoy the fruits of what they accomplished.

How to Survive a Plague is a straight forward, no frills documentary that mostly allows the wealth of powerful archival footage to speak for itself. It does, however, benefit greatly from its zeitgeist-tapping tone, established by its title (if you knew nothing about the film and saw the title, you'd be forgiven for thinking this was a zombie movie) and by the running tally revealing the death toll in year after year. It lends the film a decidedly cinematic edge, as well as another layer of profundity. Our culture is currently obsessed with the possibility of apocalypse borne of virus or illness - it's worthwhile to remember that there already was one.
Posted by Norma Desmond at 8:00 AM