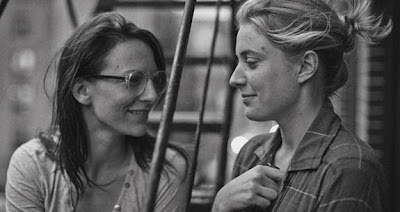 I don't know yet if Frances Ha is the best movie of the year, but I know that no other movie released so far this year has made me smile more. Less acidic than director Noah Baumbach's other recent works, but containing his typically fine attention to character detail, the film is light without being flimsy, picaresque without being scattered, and reminiscent of Woody Allen at his peak. Frances Ha is an utterly delightful movie from beginning to end, one which I can't wait to go back and watch again.

Frances Ha is a love story, albeit one about a friendship rather than a romantic relationship. As the film opens, Frances (Greta Gerwig) is living with her best friend, Sophie (Mickey Sumner), whom she frequently describes as being the exact same person as her but with different hair. So attached is Frances to Sophie that when her boyfriend (Michael Esper) asks her to move in with him, she declines and they end up breaking up, which isn't so bad as far as Frances is concerned because it just means that she can spend more time with Sophie. As the lease on their apartment is about to come up, however, Sophie reveals her intention to move out and in with a mutual friend who has found a place in Sophie's "dream neighborhood." With limited funds, resources, and options, Frances embarks on a nomadic period, living in a few different places with a few different people, trying to find something that fits and that she can make permanent. Meanwhile (and against her wishes), she and Sophie drift further and further apart - so far, in fact, that when Sophie decides to move to Japan with her boyfriend, Frances hears about it from someone else.

Frances' life is in a period of extreme flux. Her living situation is constantly changing, her job as a dancer in a modern dance company is not secure, she's still going through the growing pains of becoming an adult (at one point she invites a friend to a restaurant and when the cheque comes, laments that she doesn't have a credit card because she's "not a real person yet"), she's making some pretty bad decisions (including turning down a steady office job after losing her position in the dance company, and taking a spontaneous weekend trip to Paris that she can't afford), and she's going through a painful growing out phase in her relationship with Sophie. Although from Frances' perspective the status quo between herself and Sophie could be maintained indefinitely, Sophie is in a distinctly different place, one which necessitates her leaving Frances behind, at least a little bit. It isn't that she likes Frances any less, it's just... one of those things.

One of the things that makes Frances Ha - which was written by Baumbach and Gerwig - such a pleasant surprise is that it isn't about the ups and downs of its heroine's love life and she doesn't spend the film lamenting her lack of a boyfriend. There are characters who might, in a different film, be genuine romantic interests for Frances - two of her temporary roommates, Lev (Adam Driver), an artist with a trust fund, and Benji (Michael Zegen), who jokingly refers to Frances as "undateable" for her many quirks - but once Frances breaks up with her boyfriend at the beginning of the film, the story is about everything in her life except her love life. It's about her friendships, her family relationships, her working relationships, and her struggles to get her life and her career off the ground. It's a rare film in that way and a complete breath of fresh air, something which is helped by the fact that Frances is such an upbeat character. She goes through difficult and painful experiences, but she's ultimately a happy and positive person, even when she's adrift and doesn't know what tomorrow will bring. Frances Ha reminded me a little bit of Mike Leigh's Happy-Go-Lucky, a fantastic film about a relentlessly happy woman, and Frances the character reminded me a lot of Annie Hall. In real life, Frances would probably annoy you, but here her charms are difficult to resist as she stumbles and flails her way through life.

Frances Ha unfolds in an episodic way, following Frances' various adventures, including trying to find a suitable living situation, her lonely sojourn to Paris, a holiday trip home to see her parents, and a somewhat demoralizing return to her alma mater for work; and simply charting her progress as a person. It's an engaging "slice of life" type film anchored by an incredibly likeable lead performance and guided by Baumbach's assured direction. I expect that Frances Ha will come up a lot when critics begin releasing their year end bests lists - it certainly deserves it.
Posted by Norma Desmond at 8:00 AM