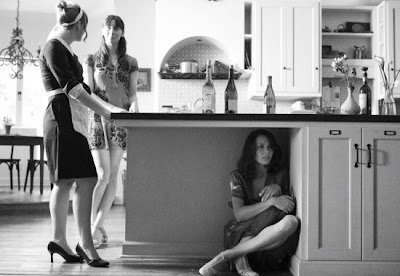 Joss Whedon's Much Ado About Nothing is the kind of film a director makes once they've attained a level of success which affords them the creative blank cheque to make a little curio. Once you've made a film as successful as The Avengers (and agreed to helm its follow-up), you'll be forgiven for making something as uncommercial as a black and white film with dialogue in iambic pentameter and a plot which hinges on wit rather than explosions. That this film should be uncommercial is a shame, since it's such a delightful piece of work, even if it doesn't quite reach the heights of Kenneth Brangh's 1993 adaptation.

Much Ado About Nothing is a comedy of love and courtship, and of the battle between the sexes as represented by Beatrice (Amy Acker) and Benedick (Alexis Denisof). The action takes place at the home of Leonato (Clark Gregg), who as the story opens welcomes into his home Don Pedro (Reed Diamond) and his retinue, which includes Count Claudio (Fran Kranz) and Benedick, as well as the malicious Don John (Sean Maher), Pedro's brother. While former lovers Beatrice and Benedick immediately fall into their adversarial roles with each other, and each reiterates to anyone who will listen their intention to never marry, Claudio falls in love with Leonato's daughter, Hero (Jillian Morgese). During a masquerade Pedro courts Hero on Claudio's behalf, giving John the opening he needs for his machinations. He attempts to convince Claudio that Pedro is after Hero for himself but, failing that, he and his minions, Borachio (Spencer Treat Clark) and Conrade (Riki Lindhome), make it appear that Hero, now engaged to Claudio, has been unfaithful.

In between John's two plots, a romance plot is hatched between Pedro, Claudio, Leonato and Hero to bring Beatrice and Benedick together. While the men convince an eavesdropping Benedick that Beatrice is in love with him but too proud to say so, Hero and her maids, Ursula (Emma Bates) and Margaret (Ashley Johnson) use the same ploy on an also eavesdropping Beatrice. Both Beatrice and Benedick are thrilled to learn that the other is in love with them, which draws them back together and softens them towards each other. Unfortunately, just as they're coming back together, Hero and Claudio publicly come apart and Beatrice presses Benedick to prove his devotion by avenging Hero's honor. Fortunately the night watch, led by Dogberry (Nathan Fillion), has uncovered the plot against Hero in time to prevent a duel, allowing the story to end as Shakespearean romantic comedies must, with a wedding (or two, as the case may be).

Whedon shot Much Ado About Nothing in just 12 days, using his own home as the setting, and filling out the cast with actors he'd worked with previously. As such, there is a looseness to the film that keeps self-seriousness and pretension at bay, and it plays as if a bunch of (very talented) friends got together and decided to make the film just for fun - and it is fun, a film from which joy emanates from every scene. There's an effortlessness to it that suggests a director at the full command of his skill, completely comfortable and confident in his abilities. Adapting Shakespeare to a contemporary setting doesn't always work, but Whedon's take makes the iconoclasm work. While there is a touch of stiffness to the film at the beginning, it quickly finds its footing and everything seems to relax and start to feel more natural once the story gains momentum and the characters begin to flesh out a bit.

The cast equips itself well, with Acker and Denisof providing solid performances around which to hang the proceedings. They both do particularly well in the scenes in which their characters eavesdrop on their friends, which are the most overtly comic scenes outside of anything involving Dogberry. Speaking of which, Fillion is also excellent as the incompetent, but enthusiastic, constable. While some of the actors certainly seem more comfortable with the language than others, none of them can really be said to be a "weak" link; Whedon runs a tight ship and his project is an artistic success in every way. Much Ado About Nothing may not burn up the box office this summer, but if you're looking for an alternative to the plethora of loud, flashy blockbusters, you couldn't do much better than this one.
Posted by Norma Desmond at 8:00 AM