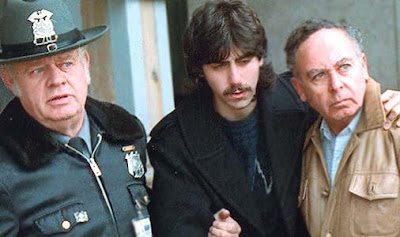 As usual, the truth lies somewhere between one story and another. Andrew Jarecki's riveting documentary Capturing the Friedmans is ostensibly about the criminal case which resulted in the imprisonment of a father and son, but really it's about how a family which was never too strong to begin with completely fell apart under the intense pressure and scrutiny of a trial and a media frenzy. Making use of a wealth of footage captured by David Friedman, the family's eldest son, Jarecki creates a fascinating portrait of family dysfunction couched in a "did they or didn't they" legal narrative.

To the outside, the Friedmans looked like a typical middle class family. The father, Arnold, was a popular school teacher who taught piano and later computer classes in the basement during his off-hours. The mother, Elaine, tended to the house and the pair's three children - David, Seth and Jesse. In 1987 the picture perfect image was shattered when Arnold was caught in a sting operation as a result of child pornography sent to him by mail from the Netherlands. When police raided the house to collect further evidence, they took note of the basement's classroom setup and began a separate investigation into the potential abuse of the students by Arnold. When they began interviewing the children enrolled in the class, they quickly amassed a series of horrific tales of the abuses committed by both Arnold and Jesse, and arrested the two on hundreds of counts of sexual abuse. Although both asserted their innocence, Arnold, encouraged by Elaine and by Jesse's lawyer, would plead guilty in an attempt to save Jesse, a plan which ultimately backfired as Jesse himself would spend 13 years in prison.

In home videos taken after the arrested and before either Arnold or Jesse could stand trial, during a period where they were allowed to return home under house arrest, the family alternately comes together and rips itself apart. David and Seth stand by their father and brother, steadfast in their belief that the two are innocent and prepared to fight with anyone who disagrees, but Elaine has her doubts (about Arnold, not Jesse). Her marriage long an unhappy one (in an interview, David describes Arnold's desire to teach classes in the basement as part of his strategy to not have to spend time with his wife), she begins to see it as a lie completely and though she presents to the outside world as standing by her husband, behind closed doors the marriage is essentially over. Seen as having turned against Arnold, she then becomes isolated within the family, as the men close ranks in support of their father and begin to view and treat her like an enemy. Of all the things to come out of Capturing the Friedmans, one of the most striking is the loneliness of Elaine, who describes herself as always having been on the outside where the four men in the family are concerned, and is treated increasingly poorly, sometimes hatefully, by her sons as the trial dates approach. In present day interviews, David and Jesse (Seth declined to participate) speak of their father (who committed suicide in 1995) in terms of hero worship and David, in particular, is dismissive of his mother, referring to her as crazy and blaming her for whatever problems existed in the Friedman marriage.

David champions his father and brother, and so does Jarecki, the pretense of narrative ambiguity belied by the intensity with which the film seeks to tear apart the prosecution's case. Although the film has been criticized, particularly by the victims in the case, for leaving out or skimming over evidence that points to the pair's guilt, there is a lot wrong with this case from a purely procedural standpoint. The case was corrupted from the start by the methods used by the police to interview the children - one police officer admits that you have to tread carefully when interviewing children because they, more than anyone, want to give you the answers that you want; another police officer admits to asking the children leading questions because that was the best way to get at the "truth" - and by the fact that at least one of the victims (interviewed here by Jarecki) only recalled the abuse after being subjected to hypnosis. There was no physical evidence of any abuse and the whole case took place in the larger context of a mass hysteria around sexual abuse that swept through the United States during the 1980s and early 1990s. Although both Arnold and Jesse would plead guilty (and Jesse would claim to himself be a victim of Arnold's abuse), the film presents their prosecution as part of a larger scale witch hunt that would see them serving time for crimes the were not guilty of.

Capturing the Friedmans makes a strong case for them - or, rather, for Jesse, whom the film portrays as an innocent who was railroaded into serving 13 years in order to avoid a possible 1,000 year sentence. The case for Arnold is a lot more ambiguous. While the sex abuse charges, as presented by the film, seem to be of dubious merit, Arnold is certainly no innocent and the film acknowledges that. That he possessed (and, in the case that led to the sting operation, distributed) child pornography is certain, and in letters to journalist Debbie Nathan (who appears in the film), he confesses to being a pedophile and to having molested the son of a family friend. To his family (with the exception of Elaine), he may always be the man whose life was ruined by false accusations, but by the end of the film it's clear that Arnold was a slippery character, one who could outwardly play the societal roles expected of him, but who was virtually unknowable because his real self was so well-hidden and kept so secret.

Capturing the Friedmans is a devastating film in a lot of ways, not necessarily because of way the investigation and court case played out, but because of the way it examines in minute detail the way that the family came apart at the seams. Although the film has been accused of not telling the whole story, the story that it does tell is compelling and captivating.
Posted by Norma Desmond at 8:00 AM