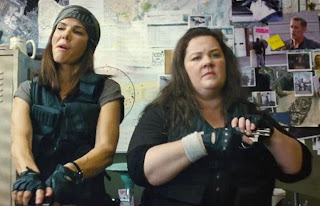 If there was any lingering doubt, that can now be laid to rest: Melissa McCarthy is a star. How long she can sustain that status remains to be seen, given that even this film, which relies so heavily on her for its success, used its promotional materials to try to disassociate from the very unconventionality that helps set her apart by airbrushing her into someone else entirely. Nevertheless, for right now, McCarthy can do no wrong. That's not to say that The Heat is a great film - beyond making its two leads women, it's not very imaginative in terms of its genre - but it's an engaging and enjoyable one.

Taking a page from the buddy cop manual, The Heat stars McCarthy and Sandra Bullock as a pair of mismatched cops (though, actually, Bullock's character is an FBI agent) thrown together against their will. Bullock plays Sarah Ashburn, a fastidious and ambitious FBI agent who gets the job done, but is disliked by many of her co-workers for her arrogance. McCarthy plays Shannon Mullins, a foul tempered and foul mouthed Boston detective who also gets the job done, but so terrifies her co-workers that they're afraid to even look in the direction of the perps she brings in for questioning. So when Ashburn arrives in Boston and immediately attempts to lay claim to a local drug dealer that Mullins has just arrested, sparks fly. The drug dealer has ties to a mysterious drug lord that the FBI wants to take down, and Mullins wants to clean up the streets of her neighborhood by ridding it of the drug lord, who also has ties to her drug addicted, ex-convict brother (Michael Rapaport). Ashburn claims jurisdiction, but Mullins has the insider's knowledge that can help them get a foothold in the case, so they're forced to work together.

The two get off to an uneasy start, as they're an extreme example of the proverbial "good cop/bad cop." Ashburn thinks she can get to the drug lord by making deals with everyone, while Mullins prefers to walk into an interview room and immediately throw the book (by which I mean a phone book) at the suspect. In addition to their problems with each other, their investigation causes them to come into conflict with a pair of DEA agents, and puts Mullins' family in danger when the drug lord threatens them in an attempt to scare Mullins and Ashburn off the case. After a false lead which results in Ashburn being taken off the case by her boss, and puts Mullins' brother in the hospital, the pair decide to proceed on an off the books basis. Arming themselves with the considerable weaponry in Mullins' arsenal, they go in like a couple of commandoes to take care of business.

The Heat isn't trying to reinvent the wheel and it exists comfortably within the confines of the buddy cop genre. To be honest, if it starred two male actors, it would probably be easily dismissed as overly derivative. That it stars two women gives it the hook that justifies its existence, but it rises above its position as a novelty through the skill and chemistry of Bullock and McCarthy. Bullock has played variations on this character before, but she's such a likeable and charismatic presence that that never really matters. For McCarthy, as well, the role isn't a great departure from her previous characters (although this one is arguably raunchier than the others), but she brings such terrific energy to the piece, and commits herself so fully, that it feels fresh while you're watching it. The two actresses play off of each other marvelously, balancing each other out and building each other up in scene after scene.

While The Heat might be lacking in originality, it is a very funny movie. It's difficult to imagine it working with any other two actresses, as the chemistry between Bullock and McCarthy is so uniquely perfect, but it definitely does work. Although the film only just opened, there's apparently already talk of a sequel. Here's hoping Bullock has better luck with a sequel to this one than she did with sequels to Speed and Miss Congeniality.
Posted by Norma Desmond at 8:00 AM