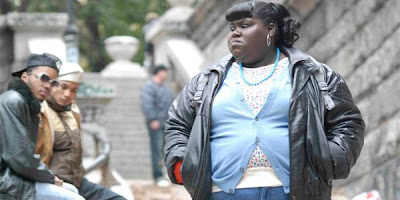 “Why me?” These are the words that Clareece “Precious” Jones (Gabourey Sidibe) writes in her notebook towards the end of the film, the only words that can even remotely encapsulate her feelings after a fresh tragedy is added to the already towering stack that she has to contend with. Hers is a life full of obstacles and challenges and horror, but she somehow manages to persevere and keep herself from sinking beneath the weight of it. Precious the film has scenes of unfathomable ugliness, but Precious the character is ultimately triumphant.

The story begins with 16-year-old Precious being pulled from class to see the principal, who opens their conversation with the words, “Hello Clareece,” and then proceeds to show that she has about 10 times less warmth than Hannibal Lecter. Precious is pregnant with her second child, both children the result of rape at the hands of her father. Due to her condition she’s going to be expelled, though the school will make arrangements for her to transfer to an alternative school. Despite the fact that she’s been given good grades, including an A- in English, she is illiterate and confesses to her alternative school teacher Ms. Rain (Paula Patton) that all words look the same to her. While Ms. Rain offers her support and encouragement, her mother Mary (Mo’Nique), undermines her at every turn. The only reason she lets Precious go to school at all is because it’s a requirement for receiving welfare.

At home Precious is subjected to physical, sexual and emotional abuse at Mary’s hands. She often escapes into a fantasy world where she imagines herself a superstar, beloved by all and loved in particular by her “light-skinned boyfriend with good hair.” While the harshness of her reality continuously intrudes on these interludes, the fact that she’s able to engage in this fantasy life at all demonstrates just how strong a person she is. That after all that she has endured she can still dream of better things for herself and imagine that she deserves it despite living with someone who tells her every day that she’s worthless, is nothing short of remarkable. Even more remarkable still is how she comes to realize that she’s doesn’t have to be rich and famous and have that boyfriend in order to be worthy of love and respect, but that she’s already worthy just as she is.

Of all the films to come out this year, Precious is probably the one that has sparked the most intense debate. Much of the criticism arises from the idea that the white male dominated film industry and critics are only willing to enthusiastically embrace films about people of color when the story is driven by suffering. This is a valid argument that can (and has) also been applied to other critically lauded and much rewarded films like Slumdog Millionaire and The Color Purple. Films that feature positive depictions of the lives of people of color are few and far between and tend to go untouched by the Hollywood mainstream, which makes the acclaim for films like Precious seem more glaring. However, I don’t believe that those facts should be allowed to obscure the questions that should really be at issue: is the film well made and does it display enough skill to warrant the amount of discussion that it has provoked? I think that it is and that it does. I don’t believe that the story panders to the lowest common denominator or promotes a stereotypical view of African-Americans. Rather, I think it gives agency to people who are more typically ignored. Of all the things various people do to help Precious, the most important is that they listen to her because it isn’t until she is given the opportunity to voice her experiences that she starts to actively take steps to make her reality good instead of relegating happiness to the world of fantasy. Precious does not represent all African-Americans, but her experiences are reflective of the reality of a lot of people (regardless of race) and to write the film off as nothing more than “tragedy porn” designed to please the white hegemony is to perpetuate the dismissal of an already disenfranchised segment of the population.

All of this is not to say that Precious is a perfect film; there are things about it that are problematic. There is a fairytale element to it that undercuts its rawness (there are a lot of Preciouses in the world, but few receive as much help as this particular Precious does) and its treatment of race is a bit suspect. The people who are good to Precious – Ms. Rain, Mrs. Weiss (Mariah Carey), Nurse John (Lenny Kravitz) – are people with light complexions. Although I haven’t read Sapphire’s book Push, my understanding is that this is a fairly significant departure, at least where the character of Ms. Rain is concerned. While in and of itself this might not be such a big deal, when you consider it in conjunction with Precious’ deep fixation on the idea that lightness is equal to worthiness or goodness (at one point she looks in a mirror and sees a blonde white girl looking back), it’s certainly enough to give you pause. While Precious is ultimately her own hero, the physical appearance of the people who want to help and save her does reinforce a very negative - and in the case of Precious self-loathing - view of race.

Sidibe, who makes her film debut here, is an amazing find as Precious and she and Mo'Nique render brave performances which hold absolutely nothing back. The role of Mrs. Weiss was originally slated to go to Helen Mirren but is played by Mariah Carey, which might sound like a downgrade but ends up working marvellously. There is a scene at the end between Sidibe, Mo'Nique and Carey which is, without question, one of the best acted scenes I've seen all year. Director Lee Daniels makes some stylistic choices that I found distracting (particularly his use of montage), but when he simply lets the actors act and lets us just watch them, the result is so completely absorbing that you forget you're watching a film. I was somewhat reluctant to see this movie because it looked so heavy, but I'm so glad that I did. While it is indeed very heavy, that's far from the whole story and Precious will surprise you with what it's capable of.

I was hesitant to see this because of all the buzz surrounding it, but I took the plunge and I'm not sorry. Everybody's talking about Sidibe's performance -- which, for the record, is first-rate -- but what about Mo'Nique? Where in THE WORLD did this kind of acting come from? Why has she been doing crap like "Welcome Home, Roscoe Jenkins" if she's capable of this kind of raw emotion?

Another great thing about "Precious": For the most part, Lee Daniels doesn't pour on the sweet to cover the sour. Precious' story is depressing, and he lets it stay that way. That's why it's so hard-hitting.

Mo'Nique blew me away. I really hope that she gets better roles after this, but I fear that it will be back to the Welcome Home Roscoe Jenkins type movies, since Hollywood has very little imagination and doesn't take many risks.

There are many more stories like this out there, white and black alone...about people who have been knocked down and have just stopped trying to get up.

What affected me most while I was watching and thinking about it wasn't the fact that these people don't want to get up, and only want to milk the system - it's the fact that they are so fucked up, that they need to drag others down into hell with them.