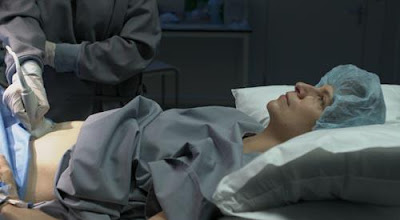 Mary McGuckian’s Inconceivable is a movie with an idea. It gets so caught up in this idea that it kind of forgets to be a movie. To be a movie you need plot and characters or, at the very least, one or the other. You can’t fool me into thinking that there’s a plot that is being moved forward just because you put in a series of fast cuts and fades to white. Nice try though.

Inconceivable takes the test tube baby industry as its subject, pondering just what it means to create a “designer” baby. Patients can choose the hair and eye color of their child, the sex, and even the sexual orientation. In a sense, they’re leaving nothing to chance. In another sense, they’re leaving absolutely everything to chance. Who knows if they’re actually getting what they’ve paid for – and if they don’t, it’s not like babies have a return policy.

All of the patients are conceiving children with the help of Dr. Freeman (Colm Feore). The patients are given ticks, essentially, rather than solid personalities and are frankly so interchangeable that it's a wonder why the story bothers having so many. There’s Frances (Geraldine Chaplin), well past her child-bearing years but in need of having a son to ensure that she and her daughter (Oona Chaplin) get a share of her comatose and dying husband’s estate; Trixie (Sara Stockbridge) who really, really wants a girl; Kay (Kerry Fox) who has a sick child and needs a baby who can act as a donor; Lottie (Andie MacDowell) whose character trait is that she’s really, really horny; Elsa (Donna D’Errico), a newagey lesbian who wants to conceive with her girlfriend; Tutu (Elizabeth McGovern), a high-strung workaholic; and finally Malcolm (Lothaire Bluteau) and Mark (David Alpay), a gay couple having a child via surrogate. That seems like a lot of characters but don’t worry; you won’t actually get to know any of them. There’s also a character played by Jennifer Tilly, whose name completely escapes me and isn’t listed on IMDB.

The success rate with this group of patients is 100%, which goes beyond being unusual and enters into the realm of the impossible. The patients have kept in touch with each other during their pregnancies and exchange photos of their babies which leads Tutu to notice something very odd: all of the babies look exactly the same. She’s heard of another clinic where is was discovered that the doctor running it was actually using his own sperm and that he has subsequently fathered somewhere in the neighborhood of 800 children through his clinic. She wonders, of course, if Dr. Freeman has done the same thing and launches an investigation against him which leads to a result that is surprising to everyone, but most especially Dr. Freeman.

The screenplay, written by McGuckian, is very repetitive. We see the same scene played out between Dr. Freeman and each of his patients – and when I say the same, I mean the exact same words from him with slight variations in terms of the responses of his patients, depending on the character trait they’ve been assigned in lieu of an actual personality. We see multiple versions of the embryo extraction and later implanting scenes, the same thing, over and over for each patient. We see each patient being injected with the drug to promote the sustainability of the embryo. It gets boring very quickly. The film tries to pick up steam towards the end but by then it’s a lost cause; you don’t care and then it gets slapped with a “happy” ending.

The actors do their best to breathe life and vitality into their characters, but they have little to work with. Tilly is the only one who really succeeds, somehow making the film hold still long enough to allow for her character to take on actual dimensions. I do, however, have one nitpick with her character: she’s shelled out tens of thousands of dollars and endured numerous disappointments in her multiple attempts to conceive at Dr. Freeman’s clinic. After the embryo is implanted, what’s the first thing she does? She goes to bar and has a drink and a cigarette. Of course, that makes just about as much sense as anything else in the movie.

There is another movie called "Inconceivable" that I saw. The comedian Mo Gaffney is in it. It is very funny! About a woman trying to get pregnant.

I couldn't finish it... Visually difficult to watch coz of the way they did its editing.