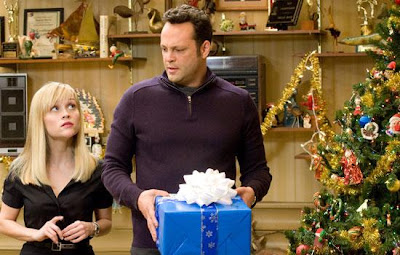 Beware of renting a movie when you’ve seen virtually everything on offer because you might end up having to endure a film like Four Christmases. Seriously. If this is all there is, find a book to read, go for a jog, break out a board game – do anything else if it means that you won’t be wasting any time on this dreck. You know how sometimes a movie will try to promote itself by capitalizing on the past Oscar wins of its cast? See the movies that the five Oscar winning cast members were rewarded for instead.

Brad (Vince Vaughn) and Kate (Reese Witherspoon) are a happily childless and unmarried couple who revel in each other’s company. They take dancing lessons for fun, enumerating their reasons for not wanting to get married to the other couples in the class (all of whom are engaged), and they play a game where they each create a character and then go separately to a bar where one tries to pick the other up. Every year they come up with a lie to get out of having to spend time with their families at Christmas so that they can go on vacation to some exotic locale. This year it’s Fiji but the airport is fogged in, delaying their flight until the next day. A TV reporter then pops up to ask them how they feel about their holiday plans being delayed, at which point their families know that they’re still in town and available for the festivities.

Both of their parents are divorced, so they have to make four visits. First they go to see Brad’s father Howard (Robert Duvall), who thinks Brad is prissy, particularly in comparison to his two brothers (Jon Favreau and Tim McGraw), who are Ultimate Fighters. Next they go to see Kate’s mom (Mary Steenbergen), where they get roped into playing Mary and Joseph in a Nativity play. Then they go to see Brad’s mom (Sissy Spacek), who is currently living with Brad’s ex-best friend, who tries to reassure Brad by stating that he “never had a sexual thought about your mom until I was 30.” Finally they go to see Kate’s dad (Jon Voight) who doesn’t get to do much besides own the place where several of the conflicts are finally resolved.

The idea for this story isn’t bad and you could make a good movie out of it, the problem is with the execution. For one thing, it seems like the writers came up with a few jokes and then tried to construct a film around it, the result being that the dynamics between the characters are always shifting to suit the needs of whatever joke is being set up and the jokes, as a result, feel incredibly forced. Brad and Kate are so in love and they have such a deep connection that they spend all of their time together, and yet they apparently haven’t ever had a real conversation in the 3 years that they’ve been together. They also, apparently, have never met anyone in each other’s families (although it seems, at least, that Kate has met Howard before) despite the fact that all of their family members live within such a short distance that they can drive to all four houses and visit at each within the span of about half a day.

This being a romantic comedy, there will of course come a crisis that will test the relationship. In this film it comes in the form of Kate deciding that maybe she wants kids after all (how she reaches this decision after nearly concussing one baby, being projectile vomited upon by another, and being tormented in a bouncy castle by her 8-year-old niece is beyond me) and Brad reiterating that he doesn’t see children in his future. Given how little they apparently know each other, they probably shouldn’t be having kids any time soon, but three guesses as to how the film ends. Since you probably only need one, want to use the other two to guess how their families find out? Yeah.