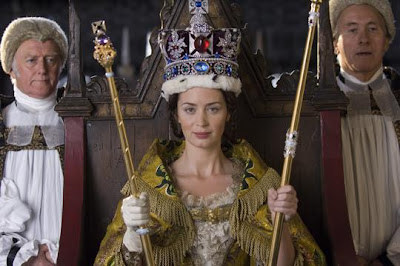 It’s strange, when you think about it, that the monarch who reigned the longest over the British Empire is so curiously underrepresented in film. She reigned for nearly 64 years and had direct descendants in so many kingdoms that she was called the grandmother of Europe, but when it comes to films she tends to figure in supporting or cameo roles more often that as the subject. Maybe it’s because Victoria’s image is defined by ideas of sexual repression and filmmakers tend to like their biopics with a bit of sex in them to keep things interesting. The Young Victoria is no different in that regard, focusing largely on Victoria’s relationship with Prince Albert, envisioning them as dewey young things in the first blush of love. The decision makes for a surprisingly delightful but unmistakeably lightweight film.

In her first meeting with Albert (Rupert Friend), Victoria (Emily Blunt) describes herself as feeling like a chess piece being moved across a board. Though the statement is a bit of a cliché, there’s really no better way to describe her position. Her uncle King William IV (Jim Broadbent) has no surviving children (well, legitimate children), making her next in line to the British crown. If he dies before she turns 18, a regent must rule in her place – something desperately desired by her mother (Miranda Richardson) and her advisor Sir John Conroy (Mark Strong), who have raised her to be essentially dependent on them so that they can wield power through her. Her uncle on the other side of the family is Leopold I (Thomas Kretschmann), the King of Belgium, who wants to influence her as a means of making his somewhat shaky monarchy more secure. His other pawn in this endeavour is his nephew, Albert, who spends his days being tutored in Victoria’s likes and dislikes in order to make a favourable impression on her when they finally meet. Of course, sheltered as she has been by her mother and Conroy, Victoria sees through his coaching and once he starts being himself they develop a natural and friendly rapport.

Though she likes Albert, Victoria has many other things on her mind. Shortly after her eighteenth birthday the King dies and she gains the crown, making the tug of war over her even fiercer. She stands up to Conroy once and for all, cutting him off at the knees even if she can’t cut him out of her mother’s life, and aligns herself with the Prime Minister, Lord Melbourne (Paul Bettany). Though Melbourne becomes a trusted advisor to her, their friendship is problematic because she’s seen as favouring him too much, arousing the jealousy of his political opponents which in turn gets the public against her, resulting in ugly scenes outside of Buckingham Palace. Her friendship with Melbourne also causes strife in her relationship with Albert, particularly after they’ve married and his own marginalization is magnified by the stock she sets in the other man. Raised in virtual seclusion, Victoria is unaware of how to play the game with finesse and believes that her stubbornness is the greatest weapon in her arsenal. She learns some hard lessons, but also learns that she can rely on Albert as a true partner if only she can meet him half way.

In the lead role Blunt renders a spirited and engaging performance that is matched note for note by Friend as the two move through the grades of Victoria and Albert’s relationship. Their attraction to each other is more or less immediate but the road isn’t smooth for them even after they’ve married. Victoria is out to prove herself and assert her independence and in doing so relegates Albert to the sidelines, making it necessary for her to find a way to balance her role as the Queen with Albert’s need to be more than just “the Queen’s husband.” As a result, some of the fiercest conflicts in the story are between the newlyweds as they try to negotiate their unique position. Much of the credit for the film's success is due to Blunt and Friend, who have great chemistry and bring a surprising amount of humor to their roles even when their characters are at odds. The more I see of Friend's work, the more I like him as an actor, and as far as Blunt goes, this is easily the most mature performance of her career. She excels here as a woman trying to find her own voice and make others hear it.

Written by Julian Fellows (Gosford Park) and directed by Jean-Marc Vallée (C.R.A.Z.Y.), the film is lively and moves gracefully but, as I said before, it’s lightweight. It touches on some of the social reforms and patronage of the arts that would mark Victoria’s reign, but it’s main concern is the love story and the effect that that relationship had on the other alliances in Victoria’s life. It all looks good – the cinematography, art direction and costume design are all top notch – but it doesn’t run particularly deep and when it came to an end my first thought was “That’s it?” Still, for what it is, it’s quite enjoyable and if you’re like me and most of the movies you’ve seen lately have depressed the hell out of you, this one is a really nice change of pace.