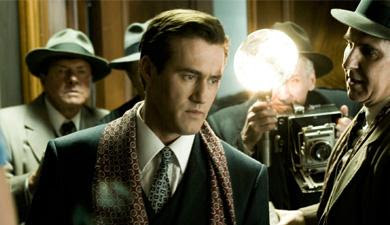 “You’re a hockey player. Play hockey,” Canadiens coach Dick Irvin (Stephen McHattie) tells Maurice Richard (Roy Dupuis). However, stuck between the Depression and the onset of the Quiet Revolution, Richard could never just be a hockey player and was intensely aware of the symbolic role that he played within the sport and in Canadian culture itself. The Rocket tells the story of Maurice Richard in such a way that it cannot simply be classified as a sports movie – it’s a movie about a nation maturing alongside a sport, and the man reluctantly standing at the centre of it.

Strangely, for a biopic, The Rocket doesn’t dwell much on Maurice Richard the man. We first meet him at 17, laboring as a machinist during the day and playing hockey by night. His anger at the injustices he witnesses and endures in his job are channeled into his playing, where his speed and ferocity sets him apart from the rest. By 20 he has married his sweetheart Lucie (Julie LeBreton), against the wishes of her father who believes that Maurice will never amount to much and never softens towards the union even after Maurice makes the cut and joins the Montreal Canadiens. Though he shows promise early on, the ease with which he seems to get injured prompts everyone to declare him “a lemon," and he spends most of the following two seasons on the bench, worrying about where he’ll go from there and how he’ll support his growing family.

Fortunately for Richard, Irvin believes in his talent, even as he’s sitting him out. When Richard gets the chance to get back on the ice, he shows his mettle, becoming one of the league’s top scorers and a beloved home town hero. Unfortunately, because he’s Quebecois, he faces a great deal of prejudice within the league where, as in industry, there is a strict English only policy in upper management. There is also a great deal of corruption which shapes how players are ranked in the league and includes the practice of some teams assigning assists to their star players in order to bulk up their total number of points. Richard takes a stand against this, agreeing to write an opinion column for a Montreal paper in which he exposes a lot of the foul practices behind the scenes, but when he takes a swipe at the commissioner of the league he’s forced to shut it down or risk being banned from playing. As the seasons pass, he gets into more trouble with the commissioner which eventually spurs a riot in Montreal and has him seriously considering quitting the game for good.

Dupuis plays Richard with a quiet determination and almost impenetrable stoicism. He’s not driven by the desire for fame or money or the excesses which come with it, but by a simple love for the game. He would like nothing more than to just be able to play hockey, but he’s not willing to keep his head down and continue to let people push him around, knowing that if someone doesn't stand up the unfairness that governs the league will simply be passed on to the next generation of players. He knows that things have to change sooner rather than later and he takes on the burden even though it pains him. In one scene he breaks down following a game, the pressures of everything outside the rink finally starting to get to him. This is a rare (even for Lucie) glimpse behind the wall Richard has erected to protect himself and Dupuis' performance throughout is one of restraint always threatening to buckle.

If the film has a flaw, I suppose it's that it relies on the audience to come into it with a certain amount of knowledge about Anglo-Franco tensions. With only a cursory knowledge of the events and conditions that lead to the Quiet Revolution, you might not feel the full impact of what's happening on screen. When Irvin enters the dressing room late in the film and hesitantly addresses the players in French, it's a big moment, but if you don't fully understand why it's so unusual and important, you're missing a piece of the puzzle that helps to put the story into the larger social context. Still, this is a strong effort, one that divides itself pretty evenly between the sport and the surrounding politics and makes for good viewing whether you're a hockey fan or not.

"Strangely, for a biopic, The Rocket doesn’t dwell much on Maurice Richard the man."

Great point! Although I saw this film four years ago, I still remember that it was somehow more effective in making us feel that we're living the historical period presented in The Rocket. Other than that, I was quite surprised (and also relieved), at the time, that the film avoided adopting an anti-Anglo stance since it's made in Quebec. All in all, this contributes to give some depth to The Rocket through a very elaborated portrayal of Dick Irvin, for instance (seeing him reading that message in French was quite moving).

Definitely a film to see for the performance of Roy Dupuis and Stephen McHattie.

I agree - it's well balanced in terms of examining the prejudices in the league without becoming an anti-anglo diatribe.