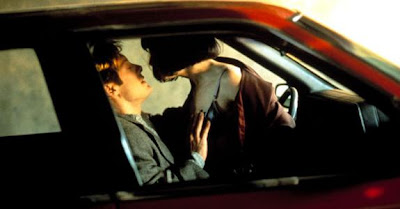 Crash is about human connections or, rather, the lack thereof. We meet James Ballard (James Spader), a film producer and his wife, Catherine (Deborah Kara Unger), who are involved in an open marriage. When they’re together they recount their sexual exploits with others to excite each other, though it ultimately does little to repair the disconnect between them. Truth be told, for as much sex as they have together and with others, neither seems to enjoy the act very much and the scenes are underscored with an almost ruthless desperation. What they want, really, is to feel alive, to feel like there’s a reason for being alive.

James begins to find a reason after being involved in a car crash with Helen Remington (Holly Hunter), with whom he begins an affair that deepens the bond forged by their shared experience in the accident. In an effort to make sense of their feelings about each other and the crash, they attend what I suppose you could call a performance art piece by a man named Vaughn (Elias Koteas) in which the crash that killed James Dean is recreated. Vaughn and his followers fetishize car accidents and their aftermath and soon James is one of them, deliberately getting into car accidents and having sexual experiences with various members of the group, including Vaughn.

To say that the film was controversial when it was first released would be an epic understatement. A lot of films are violent and sexually graphic, but few draw a connection between sex and violence as flagrantly as this one does; Crash doesn’t allow you to see one without the other. However, Cronenberg isn’t using sex and violence in a gratuitous way but rather framing it order to comment on how violence is so often sexualized in popular culture generally and films specifically. Consider the James Dean scene, in which James Ballard first experiences the act of watching a car crash in order to attain sexual excitement. By using James Dean’s crash as their template, the group is not just reenacting a horrible event, but evoking an image of glamour, that idea to “live fast, die young, and leave a beautiful corpse.” That’s the narrative in which Dean has popularly been framed ever since his death, that the accident was tragic but that he’ll be young and beautiful forever after because of it. Consider as well the actual sex in the movie. Some of it seems shocking because it’s so far outside of what we normally see in cinema, but think about what’s considered normal regarding sex in film. Roger Ebert once said that rape in movies is framed as seduction and often that’s true, either because of the way a film constructs the narrative leading up to the event or because of the way that it implicitly asks us to look at the victim or at the predator. The difference with Crash, I suppose, is that it doesn’t conform to any normalized narrative about sexual violence that lets the audience have its cake and eat it too, but directly and unapologetically asks why violence can be sexual.

If for nothing else, Cronenberg ought to be commended for going all out with this film. I mean, once you’ve set up your thesis that people can be aroused by car crashes, why not show James being turned on by the scars on the back of Gabrielle’s (Rosanna Arquette) thigh, why not show a variety of couplings whether they be heterosexual or homosexual? He’s not shy, I guess is what I’m saying, and goes all the way with it. It helps that he doesn’t rely on sex and violence to carry the film but constructs a strong narrative with distinct characters in order to explore larger questions. I know people who are repulsed by this film and I know people who are fascinated by it and I think that Cronenberg wants to inspire both of those reactions, not just with Crash but with many of his other films as well. He doesn’t just want to explore these themes himself, he wants to provoke discussion elsewhere as well – it’s the sort of thing that separates a director from an artist.

Thanks for the great review of this very controversial film. You give some of the best insight into the movie that I have seen posted. I too find Cronenberg's "Crash" to be an excellent and daring film. The film maker did not back down and turn the book into something it was not. Credit also has to go to his outstanding cast who were fearless in going where the director led them.

Great movie. I saw it a few times at the theater and on tape over the last 15 years. Dark and controversial, but still good. I was living in Atlanta at the time it came out, and local Media Mogul Ted Turner came out in the papers and said "This movie is sick. I want to see it buried". Made me want to see it even more. A friend said 'the movie is sick - people get off on car crashes and having sex with injured people. Disgusting!" but in the same year, she also loved the movie "Kissed", which was about a girl working in a funeral home who gets involved in necrophilia. Pretty funny combination of 'movies to love and movies to hate'. I said 'at least in 'Crash' the people having sex are doing it with LIVING people'.