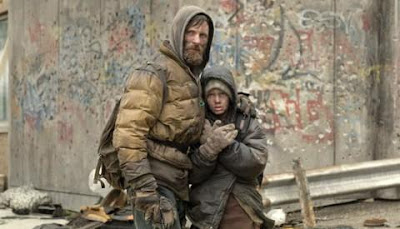 Every movie I see (and story I read) set in a post-apocalyptic world really just solidifies for me that when the end comes I need to either be dead already or be amongst those who die instantly at the moment of catastrophe, because I really don’t have the skill set or the mental/emotional fortitude to survive the barren and treacherous landscape. I could barely make it through this movie, as good as it is. In fact, it’s probably the best movie that I never, ever want to see again.

Set sometime in the future when disaster has turned the earth into an ashy wasteland, The Road follows a man (Viggo Mortensen) and his boy (Kodi Smit-McPhee) as they travel towards the west coast in the hope of finding a warmer climate. They have a shopping cart full of odds and ends that they’ve picked up on the way and a gun with two bullets left. As the earth is no longer able to sustain plant life, nearly all animals are dead, and most food rations have long since been pillaged, the roads are full of roving gangs who have turned to cannibalism. It’s to the film’s credit that the mood is so immediately and effectively established that even though the Man and the Boy come into contact with one of these gangs early in the film and you know objectively as a viewer that nothing too bad can happen at this point, it still elicits a genuine and intense feeling of tension.

The Man and the Boy will encounter many gruesome sights along the way as human beings become more and more divorced from their humanity. Though the Man tells the Boy that they are the good guys, he is not immune to behaving in ways that the Boy thinks wrong. His initial refusal to share food with an old man (Robert Duvall in a brief but beautiful performance) and his retribution against a man who briefly and unsuccessfully robs them prompts the Boy to declare that his father can’t even tell who is good and who is bad anymore. The turning point for the Man seems to be the moment when he discards his wallet with the picture of his wife (Charlize Theron) and his wedding ring – the only two things other than the Boy that he has to remind him of his former life. Interspersed throughout the film are flashbacks involving the wife, who is unable to cope with what has happened and with what she believes will happen in the future. Eventually she leaves them and, in a haunting shot, disappears into the darkness and snow to die alone. The Man is troubled by the fact that he could not give her a reason to live and with the nagging suspicion that perhaps she was right.

The film is obviously very dark and it deals with some very heavy themes. The central question seems to be whether it is morally right of the Man to keep the Boy alive at all under these circumstances. His wife is dead, the earth is dying, and there are constantly moments when he thinks that he will have to use his last bullet to kill the Boy just to prevent him from being tortured, harvested and eventually killed by one gang or another. More importantly still, he is himself dying, coughing up blood and limping forward more slowly with each step. He tells himself that he is preparing the Boy to take care of himself after he’s gone, but does he really think that the Boy, all alone in a world full of blood thirsty marauders, can really survive? The old man refers to death as a luxury that one shouldn’t ask for in times like this, but couldn’t it also be a mercy?

Mortensen carries the film with a grim determination. Gaunt and haggard looking, he is nevertheless able to bring some degree of warmth to the Man, even at the worst of times. After narrowly escaping a gang of cannibals, the Man returns to collect their discarded belongings, particularly the children’s books that he reads to the Boy at night. He is a father first and foremost and strives to make the situation bareable for his son, putting on a brave face and summoning up all of his strength to carry on. For a brief spell they find a comfortable shelter where they’re able to bathe and cut their hair and feel human again. He smokes a cigarette and drinks a glass of whisky and remarks that the Boy (born after the beginning of the catastrophe) probably thinks he’s from another world. The Boy affectionately agrees and for a moment it is almost as if they are living a normal, happy life. The Boy may be more vulnerable to predators, but it is the Man who suffers the most because he remembers how life used to be before everything collapsed around him.

Director John Hillcoat, working with an adaptation by Joe Penhall, has made a remarkably well-crafted film. He’s very good at maintaining and nurturing the tension throughout the story so that it doesn’t peter out before it gets to the end and he wisely shies away from getting too graphic when it comes to the more horrific elements of the story. It is bleak, but it doesn’t glorify the violence, suggesting it with broad strokes rather than letting us have all the gory details. It doesn’t need those details – it conveys the idea of them more effectively than a direct visual ever could.

As I said at the beginning, as much as I admire The Road’s achievements, I can’t see myself ever watching it again. Some would argue that that’s a failing on the part of the film, but I would say that some works of art leave such an indelible impression that they only need to be experienced once. Certainly I would recommend this one, though I don't know that the winter time is the best time to see it.

I really hope this gritty film is remembered come Oscar time, but fear that it's doomed to be forgotten.

Such a depressing story, but one so beautifully told.

Thanks. I think the movie would have benefited from an earlier release date, one that would have given it some time to develop some traction. As it is, it's sort of getting lost in the shuffle, which is a real shame.

I liked this movie. The acting was very good. Of course it is a very sad and depressing story.