Being a woman and a movie fan can sometimes be a very... depressing thing. Film tends to be a very masculine medium that values men as consumers and women as commodities and though ideally films would be made with a mind towards appealing to all kinds of people, most are made specifically to appeal to white men, a group that not coincidentally makes up the majority of the film making communities in North America and Europe. The standard line of thinking is that women just don't go to movies in the same numbers as men, but maybe that's because when Hollywood deigns to make movies "for" women they tend to just recycle the same old plots - plots that weren't really that great the first few hundred times. If you want to see a story about a man, you've got tons of options in tons of genres. If you want to see a story about a woman, you're options are much more limited. In light of that, and in light of the fact there seems to have been an awful lot of movies directed by women this year, I thought it would be interesting to look at the films released in 2009 that were made for women, by women, and/or with women playing the leading role. 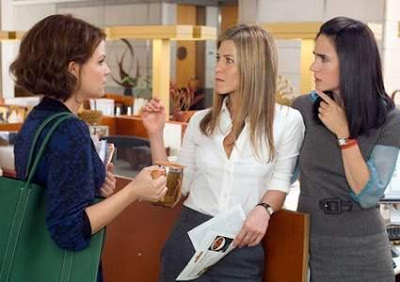 The Usual Suspects:
For good or for ill, if you want to see a movie with a female lead the place to start is with romantic comedies and horror movies. Representations of women in these genres aren’t necessarily good, but they do tend to have women in prominent roles. Let’s start with romantic comedies, since that’s the genre most aggressively marketed towards women: Oh my god you guys, things are not good. The year kicked off with Bride Wars, featuring not one but two lead actresses in the form of Anne Hathaway and Kate Hudson, best friends torn asunder by dueling weddings. A month later theaters were hit with the one two punch of Confessions of a Shopaholic (easily the winner of the movie with the worst timing award this year) and He’s Just Not That Into You. Confessions bombed but Bride Wars and He’s Just Not That Into You did fairly well, meaning that the two of the most successful films driven by and made for women are ones that support the assumptions that women are ultimately crazy (Bride Wars) and that women’s lives revolve around the men in them (HJNTIY). It’s also interesting to note that unlike Confessions, the other two films are carried by more than one actress (in HJNTIY’s case it’s multiple women and men), meaning that even in films made for women, one actress often isn’t considered enough to sell the product. Which brings me to my next point…

Romantic comedies have female leads but they also tend to feature actors who figure just as prominently into the story. The Proposal has Sandra Bullock and Ryan Reynolds, All About Steve has Bullock and Bradley Cooper, New In Town has Renee Zellweger and Harry Connick Jr.,The Ugly Truth has Katherine Heigl and Gerard Butler, Love Happens has Jennifer Aniston and Aaron Eckhart, Duplicity (not technically a romantic comedy though it was marketed that way) has Julia Roberts and Clive Owen. To sell these kinds of films, the thinking seems to be that you either need multiple female co-leads, a male-female combination or, somewhat bizarrely to my mind, one man in the lead with a woman in a prominent but supporting role in a story about a guy who has spent his life treating women like crap. I’m looking at you Ghosts of Girlfriends Past.

The horror genre isn’t that much different, insofar as horror films have a tendency to be ensemble pieces (more characters means more killing). Sorority Row, for example, is driven by multiple female characters, as is Jennifer’s Body. There was also Drag Me To Hell, starring Alison Lohman. Also out this year were The Unborn, Orphan and Grace, films with female leads that revolve in one way or another around the concept of maternity, reinforcing the idea that the only stories you can tell about women are those that involve marriage, weddings, and/or babies... even evil babies/children that want to kill you.

The Big Earners:
So, obviously, the money conversation begins with New Moon. I mean, it's not even a contest. Whatever your feelings about the series, you can't argue that it isn't made for and marketed to women. The problem, of course, is that Hollywood gets it into its head that this is the only kind of movie women want to see at the theatre. It has an audience, obviously, but if the kind of money put into making and pushing the Twilight movies was afforded to other female driven films, those would find an audience as well.

Anyway, the following is a list of the top 10 domestic earners of 2009 that have female leads, with their overall rank in parentheses:

Only the top 3 earned more than $100 million (so, well done, Sandra Bullock) and by the time you get to number 10, you're looking at a film that earned about $58 million. Of these ten I have only seen two (The Proposal and Julie and Julia) and have absolutely no plans to see the other eight. Is that because I don't want to see women in leading roles? No. It's because I have a strong aversion to films that look like they're going to spend two hours insulting my intelligence. 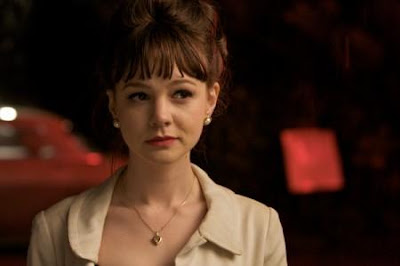 Other Films:
The slate of other films driven by female characters in 2009 includes: Underworld: Rise of Lychans (Rhona Mitra), Sunshine Cleaning (Amy Adams and Emily Blunt), Easy Virtue (Jessica Biel), My Life In Ruins (Nia Vardalos), Julia (Tilda Swinton), The Girlfriend Experience (Sasha Grey), Cheri (Michelle Pfeiffer), The Stoning of Soraya M. (Shohreh Aghdashloo), Post Grad (Alexis Bledel), White Out (Kate Beckinsale), Trucker (Michelle Monaghan), Women In Trouble (Carla Gugino, Connie Britton, Marley Shelton, Garcelle Beauvais, Emmanuelle Chiriqui), Paper Heart (Charlyn Yi), Whip It! (Ellen Page and Drew Barrymore) Amelia (Hilary Swank), My One and Only (Renee Zellweger), and My Sister’s Keeper (Cameron Diaz). I don’t know whether Madea Goes To Jail ought to be included, since it’s a movie about a woman played by a man, but director/writer/star Tyler Perry also released I Can Do Bad All By Myself starring Taraji P. Henson. With the exception of Perry’s films, which have a very loyal audience that pretty much ensures that they'll make some money no matter how limited the release or how harsh the critics, these are all films that sort of came and went from theaters without making much monetary impact, perhaps because in several cases little seems to have been expended on marketing them.

The female centered films that will end up being considered the most successful, however, won’t be one that really broke the bank, but the ones that brought the most awards friendly attention and prestige. To that end there’s Precious (Gabrouey Sidibe and Mo’Nique), An Education (Carey Mulligan), The Young Victoria (Emily Blunt), Bright Star (Abbie Cornish), Broken Embraces (Penelope Cruz), Coco Before Channel (Audrey Tautou), and The Lovely Bones (Saoirse Ronan). There's also Nine which, though it has a man in the lead, features several very prominent actresses, many of them already Oscar winners. 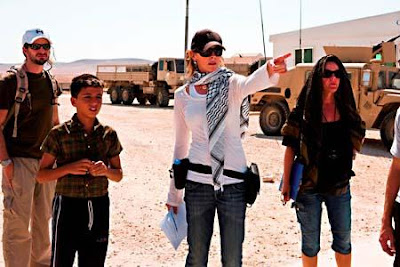 Behind the Camera:
The number of women directing films this year, particularly high-profile ones, seems higher than usual to me, though this is the first year that I’ve ever actively looked at it. Not surprisingly, most of the films directed by women are also about women: Julie & Julia (Nora Ephron), Post Grad (Vickie Jenson), Jennifer’s Body (Karyn Kusama), Bright Star (Jane Campion), An Education (Lone Scherfig), Coco Before Channel (Anne Fontaine), Whip It! (Drew Barrymore), Motherhood (Katherine Dieckmann), Amelia (Mira Nair), It’s Complicated (Nancy Meyers), and The Private Lives of Pippa Lee (Rebecca Miller).

Other films directed by women this year include The Proposal (Anne Fletcher), I Hate Valentine’s Day (Nia Vardalos), 35 Shots of Rum (Claire Dennis), Cold Souls (Sophie Barthes), Cherry Blossoms (Doris Dorrie), The Cake Eaters (Mary Stuart Masterson), Surveillance (Jennifer Lynch), Humpday (Lynn Shelton) and, perhaps most prominently, The Hurt Locker (Kathryn Bigelow) which, in its early stages, was supposed to star Charlize Theron, though I have no idea which of the three main roles she would have played.

Like I said, I don’t know whether it’s entirely accurate to say that more women directed films this year than in years past, or whether it just seems that way because so many of those films have been high profile. I certainly feel safe in saying that this is the first year in as long as I can remember that three women had legitimate shots at being nominated for the Best Director Oscar (Bigelow is essentially a lock at this point, Scherfig, Campion are long shots but still in it). Given that in its eight decade history only three women have ever been nominated as Best Director (Campion for The Piano, Sofia Coppola for Lost In Translation, and Lina Wertmuller for Seven Beauties), I think that’s pretty significant. I also think it’s pretty significant that if Gabrouey Sidibe gets a nomination for Best Actress, she’ll be the first African-American actress nominated in that category since Halle Berry’s allegedly door-opening win in 2002. You may have noticed that of the 60 films I mention, only 5 feature women of color as leads. The situation is pretty dire for women generally, but especially for non-white women.

Anyway, those are just a few things to think about as we close the book on one year and gear up for another. Hopefully the coming year will be a better one for women in film - at the very least, let's hope that the successes of Sandra Bullock and Meryl Streep (it remains to be seen how It's Complicated will fare, but I have a feeling it will be a box office winner) wake movie makers up to the fact that women don't cease to exist past the age of 40.

Interesting post. I'm doing my dissertation on women directors and the Oscars and I'm wondering myself if there are more high profile films directed by women or if I'm just more aware of it. Either way, I think more women directors are getting a decent amount of publicity (at least compared to previous years) and recognition (via reviews and awards).

I agree with you about female characters. It's hard to find someone to relate to or look up to in films. Men have multiple hero-types (action heroes mainly I suppose) but who do we have? Maybe it's worth looking at who writes these screenplays and if they are writing them because they think they make more interesting screenplays or if they have a misconception that there is an audience for these films

I thought Drag me to Hell was a pretty good film. =D

You should also take a look at female-centric films from Asia. I mean, I can't think of any 2009 release because I'm usually a year or two behind them... but films like Kamikaze Girls, Hula Girls, Hana & Alice, and Nana appeal to women (young women) and their friendships... plus they're good. LOL

And films... romantic comedies or romantic dramas are better in Asia than they seem to be in America. For some reason the original Korean versions of Lake House and My Sassy Girl are better.

There are a bunch of good stuff made by women, and for women... it just doesn't get distribution. A lot of independent and/or foreign stuff.