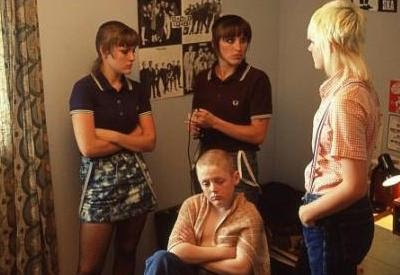 Until a couple of months ago I’d never heard of Shane Meadows’ This Is England and then suddenly I seemed to be hearing about it from everyone and having it recommended to me from all corners. Kind of weird for a movie that came out 2 years ago. And then I went to the video store looking for something else and happened to stumble across this one nonsensically included in the foreign language films section – so, clearly, forces beyond my control were conspiring to get me to see this movie. Luckily the film itself lived up to all the buildup, proving to be an uncommonly intelligent and sensitive movie about teenage angst in a time of political turmoil.

This Is England takes place in 1983 and centres on Shaun (Thomas Turgoose), a 12-year-old still reeling from the death of his father in the Falklands War. Isolated and picked on by his peers, Shaun is an emotionally volatile young man when he meets Woody (Joe Gilgun) and his gang. Woody decides that they'll take Shaun under their wing and he joins them as they hang out, smash up abandoned houses, drink, smoke, and generally cause a ruckus. Shaun gets his own version of the group's uniform and gets his head shaved, which freaks his mother (Jo Hartley) out, though she's grateful at least that Shaun has made some friends and is generally happier.

All is going well - Shaun even begins taking shy steps towards a romantic relationship with Smell (Rosamund Hanson), who is also part of the group - until Combo (Stephen Graham) is released from prison and tries to return to the familiar fold he left behind. He's shocked to discover that the group now includes Milky (Andrew Shim), who is Jamaican, but doesn't let that stop him from wearing his racism on his sleeve. Soon the group is divided, half leaving with Woody and the other half (including Shaun) staying with Combo, who leads with a rhetoric of white supremacy and encourages the others to take part in increasingly violent diversions. Shaun is easily swayed by Combo's words, which often invoke the memory of his father and the need to "reclaim" the country for him, and begins a journey down a very dark path.

There is always a danger with films like this that instead of vilifying a vile point of view, it will end up being glorified. This Is England handily sidesteps that by never immersing itself in white supremacist culture but always looking at it from a distance and introducing plenty of dissenting voices. Most of the people who break off from Woody to follow Combo end up becoming disillusioned and disturbed by the ideas that Combo is pushing, and so return to Woody. Woody is a skinhead, but not a white supremacist; rather, he considers it as an aesthetic expression divorced from politics. He's disgusted by Combo's views on race, particularly in light of his friendship with Milky, and cuts ties with him completely, which essentially means that he's cut ties with Shaun, too, as Shaun and Combo have now become inseparable.

Combo states that he sees himself in Shaun - a scary prospect now that we've come to care about Shaun - but the film makes an effort to let us see Shaun in Combo as well. Like Shaun, Combo is a person in need of an outlet, whose anger is rooted in the desperate need to regain the connection he's lost to someone he loves. For him that person is Lol (Vicky McClure), who is currently dating Woody and who soundly rejects Combo when he tells her how he feels. Shortly thereafter he engages in an act of violence that makes it clear that the only way he can deal with his intense self-hatred is to find a reason to turn it around on someone else. Combo is an easy character to hate, but he's also a character worthy of pity.

Meadows directs the film (which he also wrote) with an expert hand, making good use of the tension that arises from the story and being careful not to glamorize the violence. There are several moments when it seems like the story might explode but then Meadows pulls things back, which makes it all the more intense when the situation finally does explode. He doesn't mind making you wait, and he doesn't always take the story in the direction you think he will. There are a lot of dynamics at play throughout and he moves between them with ease, giving dimension to the characters and shading to their relationships with each other. However, while the success of the film is an effort of an ensemble, it really is all about Shaun, a character that seems to fit Turgoose like a glove. For a young actor who had never acted before, he demonstrates an incredible level of control and an ability to get straight to the heart of the character. It's a great performance in a great film.