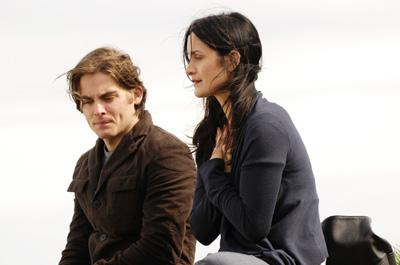 Carl Bassai’s Normal is your standard issue multiple storylines, all somehow connected, kind of story. Fortunately what it lacks in originality, it makes up for where the performances are concerned. At its heart, the film is about three families paralyzed by a shared grief and how they escape from this stasis to begin the process of moving on. It is sometimes plodding, sometimes beautiful, a real mixed bag of a film.

We’re first introduced to Catherine (Carrie-Anne Moss), still intensely mourning the loss of her 16-year-old son two years previously. In her grief she has isolated herself from her husband and their younger son (Cameron Bright), who is like a magnet for his mother’s barely repressed anger. The house is like a tomb to the lost member’s memory, his room kept exactly as it was the last time he was in it, with the exception that his clothes have been sealed in plastic in order to preserve his scent.

In another part of the neighborhood, Jordie (Kevin Zegers) has just been released from juvenile detention and returns to the home he shares with his psychiatrist father (Michael Riley) and stepmother, Elise (Camille Sullivan). Jordie has always had an uneasy relationship with Elise, whom he treats with open and aggressive hostility, which we come to learn has less to do with the fact that she’s “replaced” his mother and more to do with the fact that he would like to replace his father. They begin an affair which, unsurprisingly, leads only to more unhappiness and more complications, particularly when he reconnects with a girl he used to go to school with.

The final piece of the story puzzle involves Walt (Callum Keith Rennie), a University professor and failed novelist whose marriage is ending and whose brother, Dennis (Tygh Runyan), hasn’t left his apartment in two years. Dennis is autistic and has been afraid of the outside world ever since being involved in a car accident in which Walt, while drunk, was driving. This is the same accident that killed Catherine’s son, who was a passenger in the car Jordie had stolen and was driving.

The screenplay by Travis McDonald takes a long time to get to where it wants to go. So long, in fact, that you almost lose interest in finding out exactly how everyone is connected. Further, with the plot spread out among so many stories, the characters are fairly thin and we never really get to know them beyond the personal tics that make the narrative move forward. Luckily, the acting is good enough to make up for this shortcoming and there are a couple of quite compelling performances here. Rennie, who won the Genie for Best Supporting Actor for this performance, plays Walt as a man sinking under the weight on his own despair, seemingly powerless to help himself. His marriage to a former student is crumbling and he takes up with a current student (Lauren Lee Smith), whose refusal to adhere to the script that he has in mind causes problems. She's put out when he takes her to visit Dennis, uninterested in being included in that part of his life. Later she informs him that they met once before she was his student, just after he'd been acquitted for his role in the accident. This time it's his turn to be put off as she casually congratulates him on having had a great lawyer. Jail time might actually have been preferable, since it may have given him closure and a sense that he's made his amends. As it is, he just walks through life as if he's already dead, unable to find the sense of peace that is granted to the other characters.

Moss makes a similarly strong impression. Catherine is consumed by her grief, overcompensating for the fact that she wasn't very attentive to her son when he was alive by having him define her life from now on. Her marriage is also falling apart, as her husband's anger at having to bear the burden of moving on all by himself comes closer and closer to the surface. Of course, Catherine has anger, too, and lashes out at him for never having cried over their son. In her mind, she's mourning for both of them and so she takes it to extremes. As she comes to realize how damaging it is to suspend her life this way, she takes things to the extreme again by obliterating all those items she had been cherishing and preserving. To Moss' credit, Catherine never seems "crazy," just deeply in pain and she conveys that in a tightly controlled performance, never afraid to let her character he unlikable.

The performances really make the movie but also make you wish that instead of cramming all three narrative threads into one film, each had been given it's own so that the relationships and family dynamics could be explored more deeply. As it is, the film is somewhat clunky and not particularly resonant, the loose ends tied up too fast and too easily. There's nothing about Normal that really makes it stand out from all the other movies like it.

"The screenplay by Travis McDonald takes a long time to get to where it wants to go. So long, in fact, that you almost lose interest in finding out exactly how everyone is connected."

Personally, I didn't really lose interest for the story mostly because it was well acted from the beginning to the end. It was the hard reality of life (from each leading character's perspective) that kept me wondering what's connecting the characters.

However, the problem I had with the film is its bad habit of going into some insignificant aspect of some character's life. Did we really need to be introduced to Walt's brother? I'd say no to that.

I think that generally the film would have done well to trim the number of characters it wants to follow. The focus just becomes too divided and doesn't allow the film to get very deeply involved with any of the characters as a result.

I have watched the film and I can say that it would have been if there are only few characters involved in the movie. The transition of the story wasn't as smooth as I expected since the characters don't have a strong connection with each other.