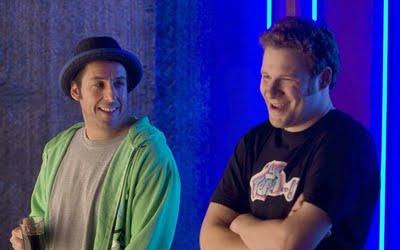 Funny People is quite possibly the most depressing movie I’ve seen all year, and keep in mind that I’ve seen both Precious and The Road. Adam Sandler renders a cranky, if solid, performance in this bloated, over-plotted film about a man confronting his own mortality and forced to wonder just what it was he was living for in the first place.

The film jumps pretty much immediately into the illness plot as George Simmons (Sandler) is told that he has a leukemia-like disease that will likely kill him. Not unlike the actor who plays him, George is a movie star who has made millions playing angry misfits in comedies with broad appeal. He has a cavernous house on a large estate overlooking the ocean, a garage full of cars and other toys, adoring fans, and women who throw themselves at him everywhere he goes. He has it all, but he’s totally alone, having essentially exiled himself from his family, ruined the one relationship that ever meant anything to him, and lost touch with anyone who might sincerely be called a friend. He doesn’t even appear to have any excesses to keep him company – no drink, no drugs, no weird Howard Hughes-like preoccupations. All he has are his films and the ones he seems to watch the most are the home movies from before he was famous.

He goes to a comedy club where he meets Ira Wright (Seth Rogan), an aspiring comic whose work is still a little rough around the edges and who hasn’t yet found an effective stage persona. George hires Ira to be his assistant/writer and the two form a bond over George’s illness which is always somewhat tenuous because George wants things both ways: when he wants a friend, he treats Ira like a friend, but when he doesn’t, he treats Ira like the help. Late in the film he takes his anger out on Ira, forcefully reminding him that he isn’t a friend but an employee. A little while after that he takes his anger out on Ira again, this time berating him for not acting like a friend. By the time the film is over, you completely understand why it is that George was all alone in the first place.

As the illness plot winds up, a romantic plot is introduced in the form of George’s ex-girlfriend, Laura (Leslie Mann), with whom he’s still in love. She’s unhappily married with two children and is brought back into George’s orbit by his brush with mortality. It looks as if she and George might get back together, but it also becomes swiftly apparent that George might not be prepared for the baggage that Laura would bring with her, and that Laura isn’t going to be able to cut the ties that bind quite so easily. This plotline is uneasily shoehorned into the story and seems to exist for the sole purpose of giving Mann, who is writer/director Judd Apatow’s wife, something to do.

Funny People is ambitious in the sense that it wants to accomplish a lot, but Apatow doesn’t really seem to know how to get to where he wants to go. The film wants to be poignant but it’s trying too hard; it drags and detours too much and it fails to recognize that its biggest obstacle is its protagonist. Apatow’s previous films, The 40-Year-Old Virgin and Knocked Up, worked in large part because they were stories about average, nice guys whom you ultimately wanted to see succeed (they were also films that were, you know, funny; this one should have been called Funny People Are This Close To Opening a Vein), but George is an asshole. He’s an asshole at the beginning and he remains one until the end and by the end, I didn’t want him to be happy because he does nothing to deserve being happy. Even Ira says that George has learned nothing from his near death experience.

Sandler made his name playing a series of overgrown children and though he's branched out during the decade to take on more serious roles, the spectre of those earlier films continue to haunt his career, making people reluctant to take him seriously as an actor. He is, however, capable of more than he's often given credit for and in many ways his performance in this film is rather fearless. It would be easy (though perhaps a bit lazy) to draw parallels between Sandler and Simmons, to make assumptions about the actor based on this particular character, but Sandler nevertheless lets George be a nasty piece of work and doesn't try to soften the edges. The performance feels honest, even if the movie itself is contrived within an inch of its life.

"Funny People" disappointed me not because of the performances -- all of which were fantastic -- but because it's essentially two movies, and only one of them is the one I paid to see. The first half of "Funny People" is a grimly funny character study, with Adam Sandler doing some of his best acting ever (I knew he had it in him). The second half was something totally different, a slapstick comedy that did NOT gel with the first 45 minutes.

Yeah, that's the problem exactly. The two halves don't fit together and it ends up feeling more self-indulgent than entertaining.