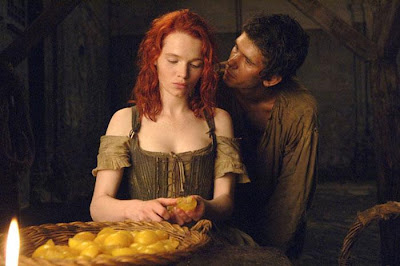 Perfume: The Story of a Murder is a film that absolutely should not work and yet, miraculously, does. It takes as its centre the sense of smell, perhaps the most difficult of the five senses to convey through the medium of film, and makes the rest of the story work around it. Every emotion and thought in this story is tied to scent and, somehow, director Tom Tykwer is able to take that and transform it into something of great visual impact, weaving a cinematic spell that seems impossible. This film is a masterpiece, plain and simple.

Based on the novel of the same name by Patrick Suskind, Perfume follows the life of Jean-Baptiste Grenouille (Ben Wishaw), born unceremoniously in Paris in the mid-18th century. Immediately the film confronts us with the crowded, polluted streets of Paris and though of course you can’t smell it, you can sense the stench of the fish market where Grenouille’s mother lays under her stall, casually births her baby, cuts the cord with the same dirty knife she uses to gut fish, and then leaves the presumed dead infant in the filth so that she can carry on with her work. The narrator (John Hurt) informs us that this is the fifth such birth she has endured but that this one will be different because, unlike the other children, this one will live. Grenouille’s cries alert the people of the market who, upon discovering the baby under the stall call out for the murder of his mother, who in a sense becomes the first of her son’s many casualties.

Grenouille lives for a number of years in an orphanage and then is sold to a tannery, where he works several more years. If the drudgery and cruelty of his life affects him, he does not show it. His world is defined solely and completely by his sense of smell, so keenly tuned that he can smell the rocks under the water of a river. He longs to escape the tannery and go to work for the Italian perfumer Baldini (Dustin Hoffman), where he hopes to learn how to distil and preserve scent, particularly the scent of living beings. He gets his wish and goes to work for Baldini but learns that he can’t teach him what he really wants to know. To learn that he must go to Grasse and once there he begins his monstrous collection, killing women and bottling their scents and then creating a perfume so potent, so beautiful, that men and women fall at his feet in worship.

The key to the film is the character of Grenouille, who is absolutely fascinating despite the fact that he has no emotions, no thoughts, no personality, and exists only to smell things. He is utterly devoid of humanity and greedily sucks the life out of everyone around him (there is a running theme through the film that all his “masters,” from his mother, the owner of the orphanage, the owner of the tannery, and Baldini, meet unfortunate ends the moment he is finished with them), existing only to take and never to give anything back. He feels no guilt regarding the many women that he murders because he’s unable to recognize them as human beings, and sees them only as scents he has yet to collect. He’s more animal than human and because of this it is difficult to hate him; he has no higher consciousness, no ability to reason. He is, in a very real sense, an innocent, which is how Wishaw plays him. Grenouille slithers through life with nothing but this need, this compulsive and all-consuming desire to create scent and is unable to recognize that his act of creation is also an act of destruction.

Adapting a novel as beautifully written as Suskind’s is always a tricky proposition. Often it is the prose itself as much as the characters and story that make it compelling, and that is of course something that cannot be translated to film. The film stays quite faithful to the novel, save for a few minor details and subplots, and makes up for the loss of beautifully constructed sentences by substituting them for beautifully rendered visuals. This is one of the most visually arresting films I’ve seen in a long time, wonderfully detailed in its art direction and costume design and perfectly capturing the spirit of the source novel. Few films make the page to screen transition as smoothly and perfectly as this one does; it is an unqualified artistic triumph.

Why I haven't seen this flick is beyond me! Ben Wishaw is one of the best young actors working today, and anything with Alan Rickman in it has got to be good! Thanks for the wonderful review, your assessment of Wishaw's character gives me chills!

I also highly recommend the book. Both are very creepy, but also strangely beautiful.

I love to have differente kind of perfumes for every ocation, i think the perfume determine our personality. I usually feel identify with my perfume specially when i have a date and i know the boy buy viagra, so i know he could be powerful and i must to be really attractive.