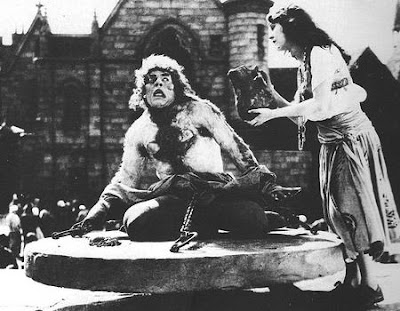 First published in 1831, Victor Hugo’s The Hunchback of Notre Dame is one of those stories that has really taken on a life of its own in popular culture. It’s one of the more frequently adapted books in film history (though it hasn’t been adapted nearly as often as Hugo’s Les Miserables), perhaps because it’s in the public domain and therefore fair game, but more likely because it’s a rich and compelling story. It’s about outcasts and misfits, injustice and cruelty, with liberal doses of sex and violence mixed in as well. It is not a “nice” story, though you might not know it by this particular adaptation.

Directed by Wallace Worsley and starring Lon Chaney as Quasimodo, this version of the story sticks to certain plot points while rewriting others in order to give it a happy ending. In this film, as in the book, Quasimodo is a deformed foundling whose only joy in life comes from ringing the bells of the Notre Dame Cathedral. Hated by others because of his appearance, he seldom leaves the sanctuary of the Cathedral, which is presided over by the Archdeacon Claude Frollo (Nigel De Brulier). In the film Claude Frollo is the spirit of kindness while his brother, Jehan (Brandon Hurst) is pure evil – you can tell because the former is dressed all in white and the latter is dressed all in black. Jehan is enamored with the gypsy girl Esmeralda (Patsy Ruth Miller) and manipulates Quasimodo into attempting to kidnap her. When the kidnapping goes awry Quasimodo is sentenced to a public lashing and Esmeralda, despite his attempt to abduct her and despite the fact that she is as disgusted by his appearance as everyone else, is the only person to show him any kindness, bringing him water to alleviate his suffering.

Jehan continues to plot to have Esmeralda to himself, but his schemes are complicated by Phoebus de Chateaupers (Norman Kerry), who rescued her from Quasimodo and now wants to marry her. Jehan stabs Phoebus and frames Esmeralda, who is sentenced to death but saved by Quasimodo, who claims sanctuary for her in the Cathedral and proceeds to defend it against the hordes of people trying to break down its doors. The scenes involving the rescue of Esmeralda and the defense of the Cathedral are the best in the movie, brimming with a high level of action and excitement that Worsley handles well. This high point, however, is followed fairly switfly by the film's conclusion, an odd ending that finds Quasimodo dying unceremoniously without Esmeralda even noticing because she only has eyes for Phoebus, who once again shows up just in the nick of time.

One of the strangest things about this adaptation (and, from what I understand, a common change in many adaptations of the story) is that it has been turned into a love story between Esmeralda and Phoebus. In the book Phoebus makes a lot of false promises to Esmeralda in order to get her into bed, fully intending to abandon her and marry Fleur-de-Lis, a wealthy woman of standing. When he recovers from being stabbed and learns that Esmeralda is about to be executed for his “murder,” he does absolutely nothing. Here, however, he’s the film’s hero, even more heroic than Quasimodo, whose deformity apparently prevents him from being really “good.” Quasimodo is characterized here as more animal than human, his devotion to Esmeralda more like that of a dog towards its master. Chaney, indeed, plays Quasimodo as if he was an abused dog (although, given how Quasimodo swings around from the heights of the Cathedral, monkey might be a more apt word), though the performance is powerful nevertheless. Chaney mixes an intense vulnerability together with a simmering anger towards his tormentors that makes his interpretation of Quasimodo particularly memorable.

The other major change to the story concerns the brothers Frollo. In the book, it’s Claude who is the evil catalyst for events, whose lust for Esmeralda leads to destruction, while Jehan is just his lay about younger brother. This gives the book an anti-clerical aspect that the film is lacking and makes for a very different set of dynamics overall. I suppose these changes work in terms of compressing the story, but they also rob it of some of its more potent themes and scenes. Still, helped in large part by Chaney's great performance, this version of The Hunchback of Notre Dame is definitely worth seeing and has aged relatively well.