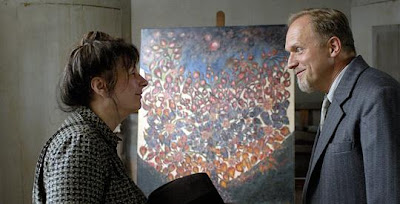 Some people just can’t catch a break. That certainly seems to have been the case with French painter Seraphine Louis, better known as Seraphine de Senlis. However, though Martin Provost’s film examines the many tribulations that she underwent in a life that began in poverty and ended in isolation and madness, it does not sink under the weight of tragedy. Instead it focuses more directly on what she was able to accomplish in spite of the forces working against her and in that way makes her story one of triumph.

Unlike most biopics, Seraphine doesn’t bother to labor through the early childhood years of its subject, opening instead in 1914 when Seraphine (Yolande Moreau) is in her early 50s. Her life is difficult, marked by poverty and hunger, and she barely makes enough money to keep a roof over her head by doing housework for people in the town on Senlis. Her sole comforts in life come from religion and art and, indeed, she sees the two as inextricably linked, viewing her own work as the result of divine inspiration. One day one of her clients demands to see a sample of her work and declares it artistically worthless. Her opinion is not shared, however, by her tenant Wilhelm Uhde (Ulrich Tukur), a German art collector of some renown. He asks to see more of Seraphine’s work and though at first she’s wary of his praise, believing that perhaps he’s making fun of her, she comes to accept his encouragement. He wants to be her patron, but the outbreak of World War I makes it necessary for him to flee France and he escapes in such a hurry that he’s only able to take one of the paintings he’s bought from her with him.

The story resumes in 1927, when Wilhelm has returned to France, settling in Chantilly along with his sister and his lover. He is convinced that Seraphine is long dead but when he ventures into Senlis to view a local art show, he recognizes her work and sees how she’s grown as an artist in the 13 years since he last saw her. Now in her 60s, she is still housekeeping by day and staying up until all hours of the night painting. Wilhelm becomes her benefactor so that she can finally focus on her painting to the exclusion of all else and his praise fills her head with dreams of the celebrity and wealth that awaits her in the future. She spends money easily and is hit hard by the onset of the Great Depression. People aren’t buying art anymore and Wilhelm can’t afford to bankroll her increasingly extravagant lifestyle.

This sudden change in circumstances, which to Seraphine amounts to having everything she ever wanted only to have it cruelly yanked away, seems to break her mentally. She has always been teetering precariously on that edge between genius and insanity and she finally goes over, rising early one morning, donning a wedding dress, and going through the neighborhood giving away her worldly possessions. She seems to be in a trance and she’s taken to the asylum where she’ll spend the rest of her life and never create another work of art.

The key to the film’s success is Moreau, who plays Seraphine as a woman of simplicity undone by the complications of success. She moves heavily and uneasily through the world, as if the weight of it is on her shoulders, but there is a lightness to her when we watch her paint – it’s an act of freedom and defiance for her. Despite her sad end, she is not a tortured artist; her work comes from a place of pure ecstasy, expressing emotions so intense that she confesses that sometimes the work she’s produced scares her. She paints because she feels that she has to but has no expectation that others will understand or embrace her work, so accustomed is she to society’s rejection. She’s an eccentric who spends much of her time in nature and talks to trees, earning her a reputation as a simpleton, though she understands far more than people give her credit for. Moreau's sensitive, transcendent performance is one of the best I've seen in a long time, the kind that makes you knot up inside because she makes you care so much about this character and you know that the downward spiral is eminent.

Seraphine does what a lot of biopic curiously fail to do: it focuses itself intensely on the thing that made its subject famous rather than on the subject's sex life. There is a brief scene in which Seraphine discusses a man she once loved and lost - a lesser film would have made this the defining thing about her story, the thing that really drove her and the thing that started her long unravelling. Instead Provost reduces the story to an annecdote in the middle of the film and is more interested in simply watching Seraphine as she creates, as she improvises her materials (she makes use of mud and blood when paint is not easily affordable), and as she draws her inspiration. Like Uhde, Provost (and, by extension, the audience) doesn't fully understand Seraphine and her strange ways, but knows nevertheless that he's bearing witness to something extraordinary. This truly is a portrait of an artist and though many of the events are ugly, it is an intensely beautiful film.