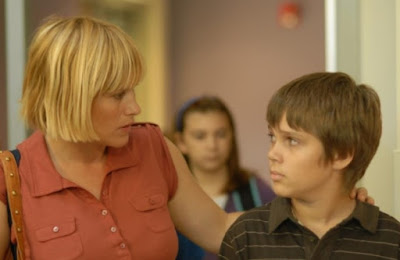 It’s a little known fact, but Boyhood took Richard Linklater 12 years to complete. I mention that because it’s something that’s seldom brought up in discussion of the film, provided one has never read or heard anything about it. Of course in actuality the process of making Boyhood has been scrutinized just as closely as the actual content of the film, which is probably both a blessing and a curse. On the one hand, it’s a remarkable technical achievement that speaks not only to Linklater’s ambition but also to how much the other people involved in making the film must respect and like him to keep making time to come back year after year for this project even though they had no contractual obligation to do so (due to the De Havilland Law). On the other hand, it might sometimes feel as though people are so fixated on the unusual circumstances of its creation that their appreciation is more for the process than the actual product. Boyhood is an incredible achievement, but it’s also an incredible film that easily transcends the inherent gimmickiness of its construction and captures the elusive nature of time as it passes. It’s not just one of the greatest films of its era, it is the film of its era.

Spanning from 2002 until 2014, Boyhood follows Mason Evans, Jr. (Ellar Coltrane) as he ages from 6 to 18. His parents, Olivia (Patricia Arquette) and Mason (Ethan Hawke), have split up and he and his older sister, Samantha (Lorelei Linklater), live with their mother and though as the film opens their father has been absent for some time, as the years go on he becomes increasingly involved in their lives. The years pass, Mason grows up, his circumstances change as his mother marries, divorces, and marries again, and as he tries to figure out who he is and how he fits into the world. It’s not a film about “big moments,” with the milestones and many of the life changing events occurring off-screen, nor is it a film that measures its characters according to moments in history deemed culturally important (because, of course, Linklater couldn’t have known which real-life events would leave a lasting cultural impact as he was making the film). Boyhood is about capturing the feeling of living in time rather than marking it and it unfolds not as a series of snapshots about what “life” was like in 2002, 2003, 2004, etc., but as one stream that captures the rhythm of the steady flow of time.

Linklater is, at this point, a master of the “going with the flow” movie, films that have the wonderfully ragged edges of a loose, rambling story that’s far less about plot than it is about characters and just sitting back and watching them interact. This is more or less true of Boyhood, save for a middle section that structures itself around the descent of Mason’s stepfather into alcoholism and the abuse that he inflicts on his family as a result. The first time I saw the film I found this section to be the weakest, less lived-in and more overtly plotted than the rest of the film, but on recent rewatch it seemed a lot less incongruous. Rather than seeming heavy-handed, it instead felt more of a piece with the rest of the film and like a means of exploring an aspect of Olivia’s character that it can’t examine head-on because the narrative is so firmly planted in Mason Jr.’s perspective. Although Olivia is the film’s most important character after Mason, it can really only look at her out of the corner of its eye, knowing at any given moment only as much as Mason himself knows about her. Because of this, the film doesn’t have the luxury of being subtle with respect to how it depicts Olivia’s choices, though Arquette herself delivers a subtle and nuanced performance, particularly in those moments when her character tries to negotiate the chaos her marriage has created in order to shield her children from it as much as possible. This middle section of the film may not be the most elegant, but I’ve come around to thinking that it does add something vital to the narrative as a whole.

Although there’s a feeling of visible plotting to that particular section of the movie, by and large Boyhood succeeds because, in the words of its protagonist, “It’s always right now.” This isn’t a movie that looks at its events from a distance, sharing knowing winks with the audience; it’s a film that’s truly in its moments of time as they happen, which is probably why it feels so resonant. It grows along with its main character, observing him as he matures and struggles to understand and come to terms with the things that he has no power to change and trying to figure out what direction he wants to take in life, and in the process it becomes so much more than just a story about a boy becoming a man. It becomes instead a story about life and time itself, attaining incredible narrative scope all while maintaining that feeling of being a small, intimate project. Boyhood is a film that will probably always be talked about for the unique way that it was made, but it’s a film that is easily more than the sum of its production. It’s an amazing achievement and one of the greatest films of the century so far.
Posted by Norma Desmond at 8:00 AM