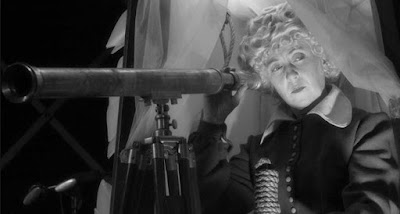 To watch a Guy Maddin film is to have the feeling of being haunted twice over. You’re haunted first by the nascent years of cinema, before movies learned to talk, as Maddin uses silent films as his aesthetic inspiration. You’re then haunted by Maddin’s own anxieties as he builds his stories on repressed and forbidden desires and oh so many mother issues. In Brand Upon the Brain! Maddin invites you to accompany a man named Guy Maddin on a journey to his past, back to the island where he grew up and grappled with an absent father, an omnipresent mother, and an infatuation with both a boy and a girl (or so he thinks). Oh, and brain harvesting. Few films can truly be described as “unique” but the psychosexual surrealist adventure Brand Upon the Brain! certainly fits the bill.

“Guy Maddin” is played alternately by Erik Steffen Maahs and Sullivan Brown. Maah’s Guy is an adult, drawn back to the island where he was raised until the age of 12 in order to repaint the lighthouse that his family called home, while Brown’s Guy is the boy on the verge of adolescence who lives through the traumatic events that resulted in his exile to the mainland. In addition to being his family’s home, the lighthouse was also an orphanage run by Guy’s parents, Father (Todd Moore), who spent virtually all of his time locked away in his lab, and Mother (Gretchen Krich), who kept a close watch over all of the happenings on the island and who was particularly concerned with trying to repress the sexual maturation of Sis (Maya Lawson), Guy’s older sister. Into this fraught atmosphere comes Wendy (Katherine E. Scharhon), who arrives first as herself, a teenage detective determined to get to the bottom of why holes have been bored into the necks of all the island’s orphans, and then under the guise of her twin brother Chance. Guy develops a crush on both Wendy and Chance, but Wendy/Chance only has eyes for Sis.

Maddin’s films tend to be a strange mixture of very accessible and not terribly accessible at all. They’re inaccessible in that they challenge modern cinematic conventions by recreating the visual stylings of silent films and actively try to make it seem like they’re long lost films that have been unearthed from some vault where they’ve spent decades hidden away from viewers’ eyes. Yet they’re accessible in that they tend to wear their thematic concerns on their sleeves, reading themselves to you rather than demanding that you read into them. In the case of Brand, it openly dissects the various layers of sexual obsession at play so that no aspect of it can be missed and at one point even pauses in order to describe the story as two triangles, one in which Chance is the desired figure at the center with Guy and Sis at the other points, the other an inverted triangle with Guy at the center as the desiring figure and Wendy and Chance at the other points. The film also comes equipped with intertitles and voiceover narration which are used to spell things out further (in addition to adding a bit of humor, such as the running gag where every time the events on screen get a little too heavy, an intertitle pops up announcing “Too much for Guy!” who then promptly passes out).

Like many of Maddin’s films (I would say all, but there are a couple that I’ve never seen), Brand Upon the Brain! unfolds like a fever dream, events following each other in a way that may seem illogical from a distance but which contain an internal and emotional logic. It’s a fantastical story that involves a strong dose of mad science, a mystery, and a rebellion by the orphans capped by a pagan ritual, but its narrative is also rooted in and driven by elemental things like identity, desire and jealousy, and the urge to subvert authority. Watching Brand is like journeying into someone’s subconscious, peeking into its most sacred and secret corners, and coming out the other side. It’s a hypnotic, eccentric work from a filmmaker who is entirely confident in what he’s doing, wholly unconcerned about the commercial viability of what he’s creating, and absolutely determined to do his own thing. It’s a joy to watch a Maddin film, and a treat to watch it again and dive even deeper than the first time. His work might be niche in its appeal but when it works as well and as it does in Brand Upon the Brain! it's also an absolutely essential watch for any movie lover who wishes to understand 21st century cinema and know its masters.
Posted by Norma Desmond at 8:00 AM