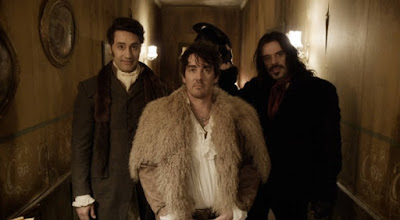 When I take Netflix up on one of its recommendations, I'm usually taking a chance. Sometimes it has made really solid recommendations and I end up watching a movie that is either pretty good or objectively bad but fun to watch, but sometimes it recommends movies that are so completely outside the realm of my taste that I have to assume that the recommendations list is created randomly rather than according to an algorithm (though I'm sure the fact that I've seen several "Not Busters," many of which are movies that are outside of what I would normally watch, through Netflix has left it feeling that I'll just watch anything). What We Do in the Shadows, which I had heard of but didn't know much about, is one of Netflix's better recommendations, a very funny movie that manages to overcome the played out nature of many of its elements (it's about vampires and it's told in the mockumentary style).

What We Do in the Shadows is about four vampires who are roommates living in Wellington, New Zealand. They consists of Viago (co-writer/director Taika Waititi), a 379 year old who followed the human woman that he loved to New Zealand but, because his manservant had put the wrong postage on the coffin and it took 18 months for him to arrive, by time he got there she had moved on and married another man; Vladislav (co-writer/director Jermaine Clement), a 862 year old whose biography will bring to mind Vlad the Impaler; Deacon (Jonathan Brugh), the hip youngster of the group at 183; and Petyr (Ben Fransham), who at 8,000 years old resembles Count Orlok, prefers to keep to himself in the basement, and has no interest in participating in any of the flatmate meetings to discuss division of household labors, which has been determined via a chore wheel.

Save for the fact that Deacon won't do the dishes like he's supposed to, or even get his familiar, Jackie (Jackie Van Beek), to whom he has promised eternal life in exchange for servitude (and who is getting a bit antsy about that because, well, she's about at the point where she wouldn't want to get any older looking before getting eternal life), to do them for him, things are going pretty well at the flat until Deacon has Jackie bring around two humans for dinner. Score settler that she is, Jackie brings her ex-boyfriend, Nick (Cori Gonzalez-Macuer) and a woman who used to bully her in school, but Nick manages to escape being dinner and instead ends up being turned into a vampire by Petyr. So now, much to Deacon's chagrin, he's the young cool guy of the group, and to everyone else's chagrin he likes to go around town announcing to everyone he meets that he's a vampire. Nick is more trouble than he's worth, but unfortunately the vampires take a liking to Nick's human friend Stu (Stu Rutherford) and if they're going to keep hanging out with Stu, then they pretty much have to hang out with Nick, too.

There's a lot about What We Do in the Shadows which is very funny, but I think that the group becoming so deeply enchanted with Stu, a milquetoast computer programmer who is so even-keeled that he doesn't even seem to give a second thought to the fact that his friend has become a vampire and now he's hanging out with a bunch of vampires, is the funniest. This is largely because Stu introduces the vampires to modern technology and then, like any person who has ever had to explain any computer related thing to their grandparent, has to bite his tongue and try real hard to remain polite while they fail to grasp how that technology can be used (though, in the vampires' defense, Stu probably should not have explained Google by stating that "anything you want to find, you type in" because of course Viago would take that to mean that it could locate the nice silk scarf he lost in 1912). Although Nick's quick disillusionment with being a vampire (he can't eat chips anymore!) and his inability to abide by the unspoken vampire rules of conduct is pretty funny, too.

That said, Waititi ends up being the star of the show as the perpetually impish Viago, a "fussy" 18th century dandy who passive aggressively tries to get Petyr to clean up his living space ("Maybe I should just bring a broom down here for you if you wanted to sweep up some of the skeletons.") and brings a victim home with the intention of killing her, but first puts newspapers down on the floor so that he doesn't make a mess (it doesn't work but he's pretty sure that, before he hit that artery and sent her blood gushing all over the living room, he showed her a very nice evening). Waititi, who wrote and directed the films Boy and Hunt for the Wilderpeople and is the director of the upcoming Thor: Ragnarok, is almost like the comic relief inside a comedy as everyone else is so deadpan, the humor so dry, while he's so bubbly and light. While the horror half of the horror-comedy hybrid might be a turn off for some, What We Do in the Shadows is such a solid comedy with such funny performances that it's worth a look.
Posted by Norma Desmond at 8:00 AM