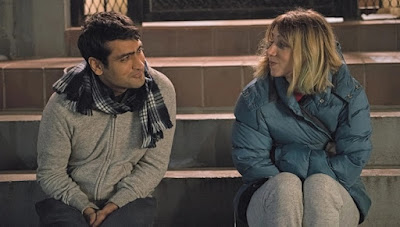 If The Big Sick is to be considered a romantic comedy (and I'm not entirely sure it should be, given that the genre is built on the interplay of a central couple, and one half of this film's couple spends the better part of the film out of commission), then it's an entry in the genre that has a more expansive set of interests than most of its brethren. It's not just a story about a boy and a girl who fall in love, but a story about cultural conflict, generational conflict, and questions of identity played out against the backdrop of a love story. It works well, aided in no small part by a lived-in feeling that comes from the fact the star/co-writer Kumail Nanjiani and co-writer Emily V. Gordon (married in real life) have mixed autobiographical elements into it. It's one of the best reviewed films of the year so far and though I'm not quite as high on it as many others, for reasons that I'll get into, I still think it's a really good film.

The boy and the girl are Kumail (Nanjiani) and Emily (Zoe Kazan), the former an Uber driver and aspiring standup comedian, the latter a University student studying psychology who heckles him during one of his sets. They go home together and though each is adamant that they aren't looking for a relationship, they begin seeing each other regularly and soon enough they're in love, but Kumail is keeping a secret. Every time he goes for dinner at his parents' home, there's a knock on the door, his mother wonders out loud who it could be, and a young Pakistani woman is brought to the table so that Kumail can meet her and, perhaps, a marriage can be arranged. When Emily finds out after discovering the collection of photo resumes of the various women Kumail has met with ("Are you judging Pakistan's Next Top Model?" she asks), she's devastated and he's forced to admit that he doesn't see a future for them because the relationship is so far from what's expected of him.

Up until this point The Big Sick is a fairly winning, sort of goofy movie that's pretty much falls in line with any number of modern relationship comedies, but once the central pair break up the film begins to forge its own unique path as a narrative. In the wake of the split, Emily is hospitalized and put into a medically induced coma, leaving Kumail to hold vigil at her bedside alongside her parents, Beth (Holly Hunter), who is immediately hostile to her daughter's ex-boyfriend but slowly comes around, and Terry (Ray Romano), who is a little more open to the guy who insists on coming back even after he's been chased away. As Emily hovers between life and death, Kumail's preference for making choices by not making a choice - ideally, he would be able to carry on his relationship with Emily without ever having to tell his parents about it, and he would be able to continue letting his parents believe that he's single and going through the motions of allowing them to arrange his marriage without ever telling Emily about that - is challenged.

A lot of The Big Sick works well. It's funny, but ultimately never frivolous (in one of the film's funniest exchanges, a heckler tells Kumail to go back to ISIS and Beth asks him if he's a recruit, because why he would want ISIS to have more people? and then makes him acknowledge that he's being racist), and its exploration of the internal conflict that Kumail feels between what his family wants for him and how he feels, as well as its acknowledgment of what his family has at stake in his future (they moved to a new country, but that doesn't mean that they want their generation to be the end of their culture and traditions), is thoughtful and compelling. Where the film stumbles is in the way that it depicts its female characters, allowing them little agency or voice. Granted, where Emily is concerned this is by narrative necessity because she's in a coma for much of the film and not available to give her thoughts for the part of the film where most of the story's emotional development is happening. When she does wake up she points out to Kumail that his emotional journey doesn't mean much to her because she wasn't there for it, but whatever emotional journey she has to take from Point B (the break up) to Point C (the reconciliation) is left off-screen.

This wouldn't feel like a big deal were it not for the fact that the film is rife with moments where, instead of hearing from the female characters about their own feelings and experiences, the film instead has their male counterparts talk to each other to explain the women's feelings and experiences. During the course of the film Kumail and Terry will form a strong bond that at one point finds Terry confiding to Kumail about something he did which has caused a rift in his marriage. Terry's feelings on the matter are explored in depth, but if Beth has any thoughts on the matter they're expressed not by her, but by Terry. Similarly, when everything comes to a head, bringing about conflict between Kumail and his parents, it's Kumail's father who ends up speaking for both parents. It's odd, for a film co-written by a woman, that the female characters exist with so little dimension and are often reduced to being little more than symbols that represent the desires, the fears, and the anxieties of the man they're in a relationship with, functioning to provide a mirror that reflects back to that man either a positive or negative image of himself. We learn a lot about Kumail, but we don't learn much about any of the women he's involved with other than how they feel about the things that he likes (such as The X-Files and old horror movies).

None of that is to say that The Big Sick isn't a good movie. Art is a messy and imperfect thing and you can appreciate certain parts of it even as you cast a critical eye at others. The Big Sick definitely succeeds much more than it fails, and though I was bothered by its general lack of interest in its female characters (particularly since it is, ostensibly, a film about a relationship), I was nevertheless entertained by it. It's a good film and makes for a nice change of pace from the "sameness" of Hollywood films and the types of protagonists those films tend to tell stories about.
Posted by Norma Desmond at 8:00 AM