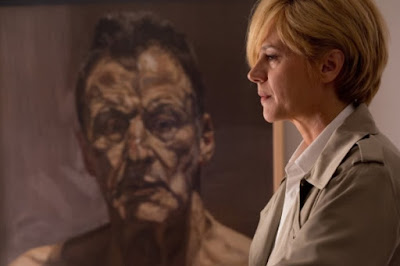 In Pedro Almodovar's Julieta the sins of the child are revisited on the parent that child becomes, though that fact seems to be lost on the title character. Based on a trio of short stories by Alice Munro, Julieta is a melodrama that has been fashioned into something that's almost like a thriller in terms of tone and build up, and that weaves itself in and out of the past and present. I wouldn't put it on par with Almodovar's greatest works, but when you're as masterful a storyteller as he is with as many great works to his credit as he has, even the merely "good" is better than just about anything else out there.

In the present day Julieta (Emma Suarez) is preparing to move to Portugal with her boyfriend, Lorenzo (Dario Grandinetti) until a chance meeting with a figure from her past sends her reeling. The woman is Beatriz (Michelle Jenner), who was a childhood friend of Julieta's daughter Antia, and when she reveals that she recently ran into Antia and her children in Switzerland it sends Julieta into a state of shock. She abruptly breaks up with Lorenzo, moves from her apartment back to the apartment she used to share with Antia, and she begins to write the story she believes her daughter ought to know, though she might never actually get a chance to share it with her. As the film moves back to the past, the role of Julieta is taken over by Adriana Ugarte and the story's focus is on Julieta's relationship with Antia's father, Xoan (Daniel Grao), and the tragedy that would ultimately result in Julieta's move to Madrid with Antia and the rift that Julieta has never understood and which has resulted in Antia's disappearance from her life for 12 years.

At its heart, Julieta is a story about how a child can have difficulty seeing his or her parents in anything other than black and white terms and how that simplicity, that sense that there's a "good guy" and a "bad guy" rather than two complex people in a partnership, can drive a wedge between parent and child. Antia has separated herself from Julieta because she blames her for what happens to Xoan and because she feels (not having all the information) that her father was treated badly by her mother. Antia in turn feels justified in holding herself apart even though she knows that it will cause her mother pain, though she won't truly appreciate the degree of pain that she's caused until she herself has and then loses a child and is left with a void in her life that can never be filled. Julieta spends years in that void, though that time doesn't appear to have made her reflect on her relationship with her own father, from whom she is semi-estranged.

In a passage that seems like a diversion, Julieta travels with a toddler Antia to visit her parents and finds that her father is having an affair with the woman he has hired to help around his farm and to help with the care of Julieta's mother, who has Alzheimer's. In the wake of her mother's death, Julieta all but cuts ties with her father, who late in the film calls her and laments that she's never even met her younger brother, who is now school aged, and defends his right to carry on with his life and find happiness. She's mostly dismissive to his pleas (though, in fairness, at this point in the story she does have rather a lot on her mind), but the fact remains that Julieta identified so strongly with the plight of her mother that it made her father a villain, just as Antia identifies with the plight of Xoan, making Julieta the villain of that story. In both cases the parent who is being defended can't speak for themselves or speak up on behalf of the other parent, which is perhaps why the identification of the child is so intense - the child sees herself as the champion of a parent who can't defend his or herself, which makes it easy to develop an entrenched position and see things in nothing but black and white.

The trip in which Julieta visits her parents is based on Munro's story "Soon" and I've read reviews of the film which brush this passage off as having been shoehorned into a narrative where it doesn't fit, though to my mind this part of the film ends up forming the roots of the story far more than the portion of the film based on the story "Chance," in which Julieta and Xoan meet (the third story of Munro's is "Silence"). This part of the story speaks so directly to the part that gives shape to the narrative (Julieta's estrangement from Antia) that the film would feel shallow without it and render it rather simplistic. Without knowing about Julieta's experience with her parents, this story might be read as a straight tragedy, a story about a woman misunderstood and then shunned by her daughter - we would, in other words, be made to identify with Julieta and see Antia as a villain because we wouldn't have the context necessary to see it as a more complicated situation. Almodovar doesn't do things half-way and in his hands Julieta is a rich drama about a woman trying simultaneously to reconcile herself to the past and to the present and slowly coming to see a fuller picture than the one she's been holding on to for all this time. This is a solid, sometimes even enthralling, film from a modern master.
Posted by Norma Desmond at 8:00 AM