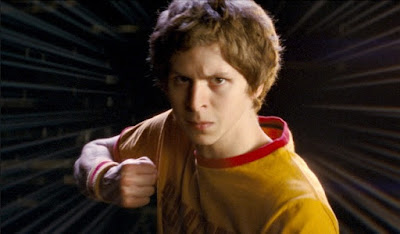 Scott Pilgrim vs. the World is one of those movies that seemingly everyone within a certain age range seems to know, yet judging by its box office only a small fraction of those people actually saw it in theaters. It is the definition of a cult film and I have a hard time believing that it would ever have been anything else. The way it looks, the way it plays, its humor and its references, pretty much everything about it from top to bottom suggests that it was always going to be the kind of movie that people watch at home with a group of friends, possibly while stoned, rather than at the multiplex, so I'm not entirely sure what Universal Pictures was thinking when it put $60 million into making it because there was virtually no way it was going to make that back (and it didn't, even when you factor in its international gross its box office take still falls well short of its production budget). Scott Pilgrim is what it was meant to be - for better and for worse.

Set in the mythical land of Toronto, Scott Pilgrim vs. the World finds its eponymous hero (Michael Cera) in something of a predicament: he's just gotten himself into a relationship with teenager Knives Chau (Ellen Wong) when he falls in love at first sight with the more age-appropriate Ramona Flowers (Mary Elizabeth Winstead). This creates two problems, the first being obvious, the second being that Ramona has 7 "evil exes" that Scott will have to defeat if he wants to date her. Each of the exes, which includes actor Lucas Lee (Chris Evans), musician Todd Ingram (Brandon Routh), and mastermind Gideon Gordon Graves (Jason Schwartzman), is more formidable than the last as Scott does battle with them in video game combat, earning new power with each level and discovering something about himself in the process.

Admittedly, though I've long been familiar with the idea of Scott Pilgrim and some of its better known elements, this is the first time I've ever actually sat down to watch it in its entirety. I think I would have connected with it more had I seen it in 2010 than I did seeing it in 2017 and my reaction to it was that it is deeply... okay. Parts of it I really enjoyed, parts of it didn't do much for me, and I'm not entirely sure that Cera was the right choice for the role. Scott's kind of a jerk as the film begins, dating Knives because her blind adulation gives him the boost he needs in the wake of being dumped by Envy Adams (Brie Larson) and requires him to give back next to nothing in return, pursuing Ramona while he's still with Knives, and not breaking up with Knives so much as completely disengaging with her while still spending time with her. Cera is capable of playing an outright asshole (if you don't believe me, check out Crystal Fairy and the Magical Cactus), but his default mode is "wishy-washy" and that's largely where his Scott Pilgrim resides. He doesn't overlap in his relationships because he's selfish so much as because he's just too passive to break off one relationship before starting another, and because of this Scott lacks certain sharp edges and often ends up being the least interesting character on screen at any given moment.

Of course Cera isn't helped in that respect by the fact that the supporting cast is a bit of a who's who. It's got a former Superman, a future Captain America, an Oscar nominee and a future winner, a Culkin, a Coppola, one of John McClane's kids, and Aubrey Plaza and Mae Whitman. As Scott's roommate, Wallace, Keiran Culkin very nearly walks away with the film, though Evans gives him a run for his money in his relatively brief screen time. Overall, the chemistry amongst the assembled cast is excellent, helping to build the lively and playful tone that dominates the film and everyone plays things just right, leaning into the inherent silliness of the project without going too far with winking at the audience to underscore the joke. The only drawback of the cast, at least from a box office perspective, is that none of them was a box office draw in 2010, which is what the film desperately needed if it was going to make enough to justify its production budget. At the time he was cast, Cera probably did seem like a decent bet, coming off of dual hits with Superbad and Juno, but by the time it was released Scott Pilgrim was three years removed from those films, and in between came the failed gambit of Nick and Norah's Infinite Playlist and the so-terrible-you-have-to-see-it-to-believe-it Year One, leaving the film with not quite enough to hang its hat on.

Of course, director Edgar Wright has his own cachet to use as a selling point and was coming off of the instant classics Shaun of the Dead and Hot Fuzz, though truth told none of his films as a director before this year's Baby Driver has ever brought in much domestically and that matters less for his other films because they didn't cost so much to make. Wright has a particular sensibility which makes him the ideal filmmaker for this project, which definitely has style to burn and can't be accused of being "overly stylized" because... that's the whole point, really, but at the stage of his career when he made this movie he was perhaps still in the process of building his audience and considered something of an acquired taste. Every movie that's made is ultimately a gamble on the part of the people funding it because there's no way to guarantee that something is going to make money, but Scott Pilgrim vs. the World was a pretty big chance to take and (financially, at least) it really didn't pan out. Fortunately that hasn't slowed Wright down, though it seems like it may have killed Cera's chances at being a leading man. Win some, lose some.


Should It Have Been a Blockbuster?: I mean, for $60 million it would have been nice if it had been a blockbuster, but this is a cult movie through and through
Posted by Norma Desmond at 8:00 AM

It is a cult movie, but I'm happily one of the cult's members. I really enjoyed this. However, it didn't do well at the box office for many of the reasons given. The movie is one of my faves of 2010, but I have to accept that its appeal is limited. I like Cera's performance and character more than you, but he is definitely overshadowed by his supporting cast.

I think part of my issue with Cera is that after I saw the movie it was suggested to me that Jesse Eisenberg may have been a better choice and now that's stuck in my head (though in all honesty Eisenberg might have skewed the role too far towards being an asshole).