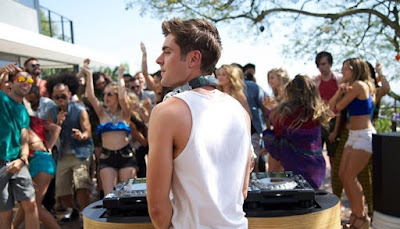 August is the cruelest month at the box office. Though still part of the summer movie season, it's the point at which the money train noticeably begins to cool off and instead of launching several big hits, is more likely to launch just one big hit that goes on to dominate for several weekends. Released at the tail end of the tail end of the summer of 2015, We Are Your Friends was probably not expected to be a Guardians of the Galaxy (which dominated the August box office previous summer) level success, though it had relatively little competition with only Straight Outta Compton hitting it big that month, but it was clearly expected to do decent box office given that it was released in 2,300 theaters. When it opened to just $1.8 million in sales, it became the fourth worst wide release opening weekend for a film since 1982, which made it not just a bomb, but an historic bomb. And this was no little indie with a boutique release either, this was a major studio release, headlined by an actor still looking to prove that he can carry a movie all on his own.

We Are Your Friends is your basic story of a young man with big dreams hustling to realize them. In this case the young man is Cole (Zac Efron, whose natural charisma is muted by the film's earnestness), who dreams of being a DJ and escaping the San Fernando Valley, where he and his friends - Mason (Jonny Weston), Ollie (Shiloh Fernandez), and Squirrel (Alex Shaffer) - struggle to make a living doing club promotion and hoping for their respective big breaks (Ollie is an actor, Mason and Squirrel are... well, it's actually not terribly clear what they're hoping to become). Cole finally gets his foot in the door when he's befriended by James Reed (Wes Bently), a DJ who has risen to prominence and now rests on the laurels of his past achievements and simply shows up to cash a cheque. The two begin collaborating together, but that partnership is put at risk when Cole falls in love with James' girlfriend, Sophie (Emily Ratajkowski), who fascinates him despite having the personality of a dry paper towel.

As if aware that the characters are all duds, director Max Joseph tries to punch things up with some stylistic flourishes which only sometimes work. A scene in which Cole unwittingly takes PCP and experiences its effects while looking at a painting, and a scene in which he describes the effect of music while the film shows the X-ray view of the characters on screen to demonstrate the physical effect of EDM music, work. The film's habit of literally spelling out its dialogue across the screen does not, both because it feels like an embellishment that exists solely to try to mask the fact that what's happening isn't very interesting, and because highlighting the dialogue in that way suggests that something profound is being said, which just isn't the case.

In addition to the thin soup of the dreamer-trying-to-make-it and love triangle plots, there's also a subplot that's a bit of Glengarry Glen Ross-lite in which Cole and his friends go to work for Paige (Jon Bernthal) at a real estate "solutions" company where his job is to convince people whose homes are about to go into foreclosure that for a $5k fee, the company can negotiate with their bank regarding the mortgage. Despite the fact that Paige is pretty clearly a conman, Cole is shocked - shocked! - when he goes along with him to a meeting with one of the clients that Cole has hooked and watches Paige convince her that the only way out of her trouble is to sell him her home for $20k with the promise that he will then rent it back to her, though in actuality he intends to put it on the market for double what it's worth. Cole is left angry by Paige's actions and is saddened as he accepts the cash he's made as commission on the deal, which is all set up for an ending which sees Cole easing his conscience by giving the woman all the money he's earned working in real estate, though instead of including that scene in the narrative proper, the film punts it to a mid-credits sequence even though the film is only 96 minutes long and isn't in a position to shun an opportunity for emotional depth.

All told, We Are Your Friends is a pretty uninspired piece of work. It doesn't just rely on the over-used plot points of countless other movies to give shape to its story, but it doesn't bother to do anything new or different to make those cliches interesting. It also doesn't seem to really understand itself judging by the performance that occurs during the grand finale (which is basically this) after it's revealed that Cole records just about everything happening around him in case he can sample it for use in a track. The track he ends up with makes use of a recording of a conversation with Squirrel, during which his friend asks "Are we ever going to be more than this?" It's a question asked in desperation and the tone of Squirrel's voice is nothing but despondent, yet after the sample plays, Cole repeats the question to the audience who enthusiastically reply that, no, they'll never be more than this and it's like... really? Firstly, attending an EDM concert is the most you'll ever be? Dream bigger, kids. Secondly, the statement as made (exploited, incidentally, after Squirrel's untimely death) is clearly a cry for help from a young man who feels stuck and lacking in opportunity to move up in the world, not a battle cry regarding the invincible nature of youth. Then again, given that the film ends with the characters (other than poor Squirrel) in basically the same positions they were in at the start, just slightly happier (even though their friend died), maybe it does think that they'll never be more than this and that that's a good thing. And maybe that's the great failing of We Are Your Friends, that it makes itself feel the euphoria of its musical cues, but can't extend that feeling to the audience.