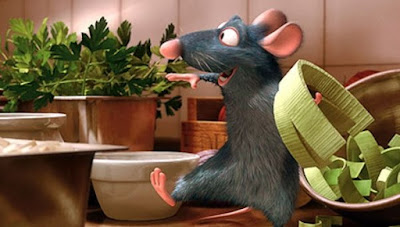 The great thing about Pixar is that it's a reliable source of quality entertainment. There have been a few missteps here and there, certainly, but by and large Pixar has been consistent in delivering great film after great film after great film. That's wonderful for viewers, but something of a double-edged sword for the films themselves because it means that a new film can be the toast of its year of release only to be pushed out of the spotlight within a year by the next great Pixar movie. In 2007 Ratatouille was the best reviewed film of the year, declared a masterpiece by many. But it was followed by three of the best films Pixar has released to date and as time has passed, Ratatouille seems to have left the public consciousness even as the other great Pixar films have remained on the radar. Was it overrated then, or is it underrated now? Let's revisit it and see.


The Story
It's the story of a guy with a dream. That guy just happens to be a rat whose dream is to be a world-class chef. The rat is Remy (voiced by Patton Oswalt), who is forced to flee home but ends up separated from his family in the sewer, which whisks him away to Paris. Once there he finds a way to realize his dream, teaming up with Alfredo (Lou Romano), the garbage boy at the restaurant of the late, great Auguste Gusteau, using the human as a marionette and bringing his culinary creations to life. Alfredo gets the credit, but also ends up with a target on his back, putting the secret of his success in jeopardy.


The View From 2007
The Good: "This is clearly one of the best of the year's films. Every time an animated film is successful, you have to read all over again about how animation isn't "just for children" but "for the whole family," and "even for adults going on their own." No kidding!" - Roger Ebert, Chicago Sun-Times

The Bad: "The film is more of the same from director Brad Bird... I find Bird's work entertaining yet too antiseptic and vacant to be truly inspiring. Give me something that packs an emotional whammy — Toy Story, Finding Nemo, any of the ancient Disney classics or works of Hayao Miyazaki — over a Bird film any day." - Phil Villarreal, Arizona Daily Star


The View From 2017
When it came out in 2007 Ratatouille was extraordinarily well-received by pretty much everyone. Critics loved it (if you look at Rotten Tomatoes, only 10 of the reviews cited are negative out of almost 250), the film industry embraced it (among Pixar films, only Wall-E's 6 Oscar nominations surpass the 5 nominations Ratatouille received, which makes it tied for nominations with Up and Toy Story 3), and audiences endorsed it to the tune of $206 million at the domestic box office and $620 worldwide. Despite that, I'm not sure how much of a lasting impact Ratatouille has left on pop culture, whether it's because it was followed by a string of great Pixar films (Wall-E, Up, Toy Story 3 in 2008, 2009, and 2010, respectively) that sort of pushed this one back in people's minds, or because it feels at first blush like one of the more "kid focused" Pixar movies as opposed to those films that are designed to speak in two frequencies, one which appeals to kids and another that appeals to adults. As the film opens it's somewhat easy to agree with that impression because, charming though it might be, it's about a cute anthropomorphic animal and the premise is a very basic journey story in which the protagonist is driven away from home and forced to make his own way in the world, becoming the person he was meant to be in the process.

For much of its running time, Ratatouille doesn't do much to break the mold, at least in terms of storytelling. It combines Remy's journey story with the similarly familiar story of Alfredo being the secret heir who stands to collect an inheritance provided he learns the truth in time to claim it, and its most notable feature is not narrative but technical. Ratatouille is a gorgeously animated movie that captures its setting as if with deep focus and captures its characters with subtle nuances, right down to individual strands of hair. Even now, with animation techniques having improved by leaps and bounds year after year for a decade, the animation of Ratatouille remains impressive. This is particularly true with respect to Remy, whose body language and mannerisms help bring him to life, doing the work that Oswalt's voicework (fantastic, though it is) can't do alone.

It's in the final stretch that the film really begins to reveal its depths, becoming more than just a film that manages to enchant in spite of the fact that it literally shows rats in the food that people are about to eat, which should really be a bridge too far. Ratatouille is a film about an artist and his drive to create, and it's about the way that art is received once it's put out, sometimes being mediated between the artist and the public by a third party such as a critic. The closer it gets to its conclusion, the more thoughtful it becomes about the process and the purpose of putting art out into the world, and about how to create space in which it can be received. It is perhaps no coincidence that a film which uses its final moments to position its critic character as a champion and defender of art, and in particular of the kind of art that takes risks and drives the medium in new and interesting directions, giving him a monologue that is eloquently written and expertly delivered by Peter O'Toole, should have been so embraced by movie critics, but in the end Ratatouille utterly deserves all of that praise that it received. It's a beautifully animated film with a screenplay (and voicework) that is alternately funny and touching. If in the ten years since its release Ratatouille has become Pixar's forgotten masterpiece, it's one that fully deserves to be revisited and rediscovered.
Posted by Norma Desmond at 8:00 AM