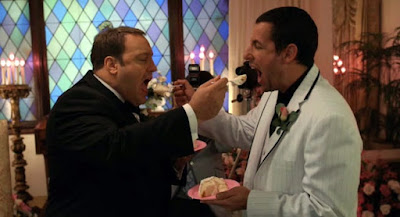 I would like to think that a movie like I Now Pronounce You Chuck & Larry couldn't be made in 2017, but I would have liked to have thought that a movie like this couldn't even have been made in 2007. This movie is vile. There are parts of it that are downright gleefully hateful, and it doesn't particularly matter that it ends by giving a shrug towards tolerance. Once a movie has spent two-thirds of its time positively luxuriating in homophobia, misogyny, and just a little bit of racism, it doesn't get any credit for spending a few minutes giving lip service to the notion that it's not cool to be a bigot. You don't get to throw the word "faggot" around with abandon and then close by casually remarking that people shouldn't use that word. This is one of the grossest movies I've ever seen.


The Story
Chuck (Adam Sandler) and Larry (Kevin James) are New York City firefighters, the former a womanizer, the latter a widower who has been trying without success to change his life insurance policy so that his children will be his beneficiaries instead of his late wife. When he learns that it will be quicker and less complicated to simply remarry so that his new spouse can become the beneficiary, he comes up with the idea of entering into a domestic partnership with Chuck, who reluctantly agrees, but then the two have to convince investigators of the authenticity of their relationship.


The View From 2007
The Good: "The movie is often stupid. But coming from an industry institutionally terrified of being honest about its own sexuality, it feels brave, going a step further than 'not that there's anything wrong with that.'" - Wesley Morris, Boston Globe

The Bad: "As the newly married couple becomes more and more exposed to a safe version of gay culture, where the homosexual lifestyle appears to involve little more than wearing funny costumes and dancing to Deee-Lite, they grow more enlightened. In Chuck’s case, that simply consists of no longer using the word 'faggot' and beating up anti-gay protestors." - Pete Vonder Haar, Film Threat


The View From 2017
I'm going to get this out of the way first: the premise of this movie has no internal logic. The whole purpose of Chuck and Larry's marriage is so that Larry's kids will not be left parentless and penniless if he dies on the job. He and Chuck work the same job. The near-death incident that gives Larry the inspiration to enter into a domestic partnership is one in which both he and Chuck end up in the hospital. What happens to the kids if they both die?.

Anyway. I Now Pronounce You Chuck & Larry, which boasts Oscar winning screenwriters Alexander Payne and Jim Taylor in its credits, is a film built on the hypocritical notion that it can spend the vast majority of its time making gay people the butt of the joke and then end with a speech in which one of its protagonists decries the very homophobia he himself has engaged in and that the movie has taken such joy in portraying (it's possible to make a movie about intolerance without being intolerant, but this movie isn't it; when the characters act like bigots, it's meant to be funny that they're doing so). Yet its overt homophobia, which includes multiple utterances of the word "faggot" (at least 5 more than necessary for the film to make the point that the word is slur), is the least of its issues. In its dimwitted way, I Now Pronounce You Chuck & Larry actually thinks it's being progressive and that by having its characters behave like bigots it can successfully make a point about the ugliness of bigotry.

What undercuts any sense that the film has its misguided heart in the right place is the subtextual homophobia woven into its very fabric. This is the kind of movie whose attitude towards the notion of two men kissing is, "Ewwwwwww!" as demonstrated in two scenes where Chuck and Larry are called upon to kiss and in the first Chuck instead slaps Larry across the face, while in the second the film pauses to wring the humor out of the sight of Sandler and James slowly inching their lips towards each other while making it clear that they're repulsed; the kind of movie where when a straight man is "acting gay," like Sandler in an extended sequence set to the tune of "Girls Just Wanna Have Fun," and when a gay man is being himself, like the character played by Ving Rhames, it means that the actor starts mincing like a gay stereotype from a bygone era; the kind of movie where when Sandler's character so much as makes a phone call under the guise of being a gay man, he wears a disguise.

This is a movie where Sandler's character is so ragingly heterosexual that when Larry comes by to share his idea about entering into a domestic partnership, he's interrupting Chuck's fun with not one, not two, but six women wearing nothing but their underwear, and when Chuck begins forwarding his mail to Larry's house in order to sell the notion that they're living together as a couple, it results in the delivery of multiple porn magazines and a case of Magnum XL condoms. Chuck is so straight that he's only thought about being gay enough to believe that he would be way out of Larry's league sexually, and the movie is so juvenile that its favorite recurring gag is that people keep assuming that, in the film's parlance, Chuck is "the wife" in the situation. Because to be a gay man is bad enough, but to be the receptive partner in an incidence of gay sex is to be completely emasculated. Hilarious, right?

But the film's homophobia isn't even its most disturbing facet (and neither, despite Rob Schneider's appearance as "Asian minister," a racist caricature second perhaps only to Mickey Rooney's appearance in Breakfast At Tiffany's, is its racism). The misogyny of this film is on another level as the film perhaps overcompensates for its "gayness" by trying to be the manliest, dick-swingingest movie it can be. In one of the more disturbing movie scenes I've seen lately Chuck sexually harasses and demeans his doctor, who then has to walk out of the room through a gauntlet of his firefighter buddies hooting and hollering at her and making sure that she's been properly put in her place for having the gall to... I don't know, try to perform her job while existing in a woman's body. The scene is disturbing not just for what happens in it, but for the fact that the film doesn't know that what it's just depicted is disturbing, as evidenced by the fact that the doctor will turn out to be one of the six women that Chuck will later have at his home. Undoubtedly Chuck is the kind of guy who would describe himself as someone who "loves women," even though he clearly hates women. He needs them to fulfill his sexual desires (and the film makes a point that his sexual desires are so enormous that he's all but slept his way through the women of New York), but just about everything about every interaction he has with women signals that he holds them beneath his contempt. That the film doesn't even recognize that, and in fact celebrates Chuck at every turn as if he's the most awesome guy ever to walk the planet, says it all, really.
Posted by Norma Desmond at 8:00 AM

Yeah, that is a bad movie and Alexander Payne and Jim Taylor both disowned the film as much of their work was re-written by Sandler and his cronies to make it more disgusting.

Oh, I have no doubt that the end result is more Sandler/Happy Madison than Payne/Taylor.